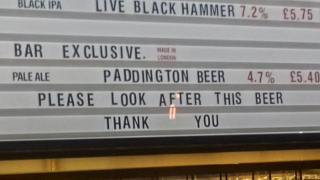 The promotional gimmick accompanying the opening of BrewDog's new London bar - well, new-ish, I'm working through a backlog here - came from the mind of Evie, the four-year-old daughter of the brewery's head honcho James Watt. She suggested that they should brew something called Paddington Beer, and it should have marmalade in it. What we ended up with on its mid-March opening night was an IPA infused with oranges, and it actually wasn't bad at all. (This story also has quite a decent punchline, but you'll have to wait for BrewDogging #61/#62 to hear it. See, I told you there was a backlog.)

BrewDog Paddington has a similar backstory to BrewDog Milton Keynes: it used to be one of the Draft House bars that the brewery acquired as a job lot last year. Most of them have kept their original name and their uncertain beer policy (a mixture of keg, cask, craft and whatever proportion of macro the location demands): but in a couple of cases, it's been decided that reworking the bar to fit the now-familiar BrewDog template would be more profitable. And that's apparently the case here.

To be honest, I wasn't even aware there had ever been a Draft House in the area, despite passing through the station and its environs on a semi-regular basis. Once you know to look out for it, it's a surprise to realise it's been there all along, not too far down one of the side streets off the stretch of Praed Street linking Edgware Road and Paddington stations. If nothing else, the huge unsubtle lit-up sign in Punk IPA blue has made it more visible than it used to be.

We roll in through that entrance late on the night of the bar's shareholder preview, and are initially surprised at how quiet it seems. Sure, it's after 9.30, and we've been to enough of these preview nights to realise that people get there early to claim bragging rights and then leave after a bit. A little bit of exploration reveals what may have been the problem with this location all along - the Praed Street-ish entrance could be thought of more accurately as the back. At the other side of the building is a door leading out into the fashionable Paddington Basin area, and that's where all the action is: notably, the bar, and all the people we were expecting to see.

That initial revelation of the virtually empty back bit is such a surprise, it takes us a while to realise that there's still quite a bit going on there. Although it isn't being used very much on our visit, there's a gaming area that includes a shuffleboard table and a couple of pinball machines. Tucked away in one corner of this section is a rather less traditional addition to the bar - a hotdesking area. It's an initiative called DeskDog that they're rolling out in a couple of locations, but Paddington is the first bar where an area's been specifically built for the purpose. The capital's cafes are full of road warriors with laptops working at the tables, so you can see why BrewDog think they might be a market worth targeting: for a small fee you can reserve some desk space for the day, with access to free coffee throughout, and the promise of a pint of Punk thrown in at hometime. It's an idea that's kind of scuppered on the opening night by the almost total collapse of the bar's wifi, which not only stops people from bragging on social media about being at the launch, but also slows down their ability to pay for their beer, which is a little more alarming.

Unlike the Praed Street end, Basinside is buzzy and enjoyable in the expected fashion. The bar as a whole feels like a greatest hits compilation of BrewDog's best bits, both old (steps to sit on, shuffleboard) and new (the workspaces). The music policy - on the first night, at least - is pleasingly bonkers compared with the usual, at one point following up Blitzkrieg Bop with Easy Lover (a juxtaposition that The Belated Birthday Girl describes as 'properly punk rock'). The beers are up to the usual standard, featuring a few guest breweries located local to the bar (Moncada's Notting Hill APA stands out), and a couple of chunky beers for our nightcap (Siren X Track's Strawberry Praline stout, and Latitude 42's South Pacific Breakfast porter). And yes, the Paddington Beer is a decent brew in its own right rather than just a gimmicky name.

You can't always get a decent handle on a bar on its preview night - not that this has stopped me before, obviously - so two months after the bar's March 2019 opening, The BBG and I return on a Saturday morning for a boozeless session, trying out a couple of new additions to the BrewDog portfolio. We're there for the first day of the new brunch menu, which has caused ructions in some quarters: some interesting new things have been put on the menu, but old favourites like the eggy bread and the dirty Benedict have been taken off to make room. The BBG, millennial hipster that she is, goes for the avocado toast with poached eggs, which she says is perfectly fine apart from her usual problem with avocado toast - why would you want a breakfast where the main component of it's cold? She warms it up with a couple of hash browns on the side, and wonders why they're so huge and circular, until she sees my breakfast. The new brunch burger is easily the most ridiculously overloaded one I've ever had at one of these places: a beef patty, black pudding, bacon, mushroom, fried egg, cheese, hollandaise sauce and a burger-sized hash brown precariously stacked inside a bun. It's impossible to eat with your hands or with cutlery, and the fact that it tastes like the existing Jackpot burger with extra sides makes it a very weird thing to be eating during daylight hours. Still, it all proves that the kitchen at Paddington behaves as it should, though I may go for a slightly healthier breakfast option next time.

The location and positioning aren't quite as good as they think they are, but Paddington is a perfectly decent way to mark our 59th episode of BrewDogging, not to mention the first one where I've put the list of previously visited bars at the end of the page rather than the start. Yes, it would have made more sense to save the format change for episode #60, but it makes the 'hard stare' gag work better, so tough. You'll just have to grin and bear it.