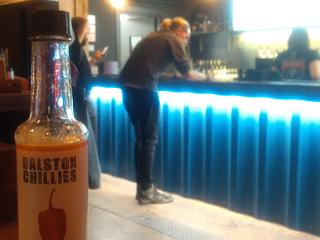 I've mentioned already that I have a backlog of these BrewDogging reports to get up on the site. Sure, this is number sixty, and hooray for all that, but in the real world timeline we're already up to 63 and have a definite plan for number 64. Part of the problem has been a sudden influx of new bars at the top end of 2019, similar to the logjam of openings we had a year ago. And it all came to a peak on March 29th, when three new bars opened on the same day, in very different locations. One of them, for those of you trying to second-guess our future plans, was in Paris: and if the date of March 29th sounds familiar, it's because up until shortly before that it was assumed that we, as a nation, would be leaving the EU on that day. The BBG and I briefly considered making the Le Marais bar the one we visited on that night, getting the last Eurostar out of Europe just before the UK pulled down the shutters at 11pm. Luckily for all concerned, we made do with a trip to Dalston on the Overground instead.

BrewDog have been angling to put a bar in this bit of East London for some time now. The closest they've got in the past was the ill-fated Homerton bar: after that fell through, they had a rethink and decided to open up a place in a district that's actually fashionable now, rather than one that's theoretically up and coming. It's been a struggle to get here, with the opening being delayed thanks to a campaign by locals who seemed to think that the bar would attract undesirables lured by cheap booze, not realising that 'cheap booze' is as far from the BrewDog ethos as you can possibly get. The location they had in mind before this one was big enough for them to consider making it their first Outpost brewpub, but in the end hassles with landlords meant that honour had to go to Tower Hill instead.

By comparison, the version of BrewDog Dalston that they've ended up with on the Stoke Newington Road looks like most of the other ones on their books - at first glance, anyway. But look a little closer, and there are a couple of nice wrinkles. For a start, it's spread over two stories - ground level and a basement - which allows for the large surface area BrewDog demands of its newest bars, but in two intimate-seeming chunks. Predictably, the upstairs bit is where the bulk of the action is on a Friday night: but there's still a decent crowd in the downstairs area, spread over the usual collection of booths, steps and tables.

That crowd is interesting in its own right for its diversity. There's a broad range of ages represented on the opening night, all the way down to the couple of patrons whose pushchairs are stashed underneath the stairs. Meanwhile, remember how the racial mix seemed surprisingly lacking in the Brixton bar? Not the case here. It's reflected in the music selections, which remind you of the anything-goes attitude of the old bar playlists before they got colonised by Radio Whiteboy: the segue from Snoop Dogg to the Smiths makes your eyes water, but it works in context. A bit overly loud, though, but that may just be a first night thing. (A total stranger struck up a conversation with me in the gents to observe that the sound mix in there was better than the one in the bar.)

Dalston has inherited one idea from dead old Homerton, and I thoroughly approve of it: aside from BrewDog's own products, the majority of the guest beers are drawn from London breweries within a small radius of the bar. This means we can guzzle on beers from the likes of Pressure Drop (with their own Pale Fire as well as their Track Brewing collaboration, Tiger Tail) and Two Tribes (who provide their own New Romantic Calamansi as well as a collaboration with Kirkstall called Bring The Noise). Inevitably, we fall back on a couple of BrewDog's own high ABV monsters to wrap up the night. (Paradox Islay and Ten Ton Truck, since you ask.)

It's an enjoyable bar, and an enjoyable opening night - one of three happening simultaneously, don't forget, which explains the late surprise appearance from BrewDog boss James Watt himself. The BBG buttonholes him for a quick natter, and gets a free taster of Mail Order Martian as a result. She somehow fails to ask Watt about the possibility of any vacancies for pissed Walmart greeters, but does find out that this is the middle stop of his whirlwind tour of all three of the new bars - Paris at last night's shareholder preview, Dalston tonight, and then Peterhead the day after that.