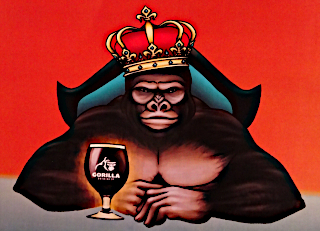 In the meantime, your Simian Substitute Site for May 2019 is Gorilla Brewing, owners of a brewery and bar in Busan in South Korea. The former makes very nice beer, while the latter shows live Premier League matches late on Saturday nights: it appears that watching Spurs lose to West Ham is considered entertaining the world over. (Although the post-match analysis on local TV seemed to be a little too keen to blame Spurs' failure on how little Son Heung-min got to do.)

How do I know this? Oh, you've probably worked it out by now: and if you're a regular reader, with a bit of deduction you can probably work out where it's heading. So, apologies for the lack of content in April, but hopefully during May I'll be able to tell you a lot more about what I was doing when I wasn't writing. Feel free to chastise me in the comments below if you must, but I'll be too far away to be listening properly.