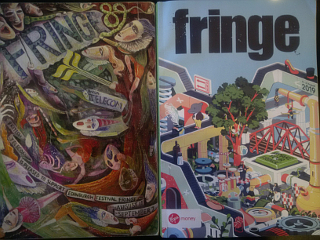 Douglas Adams (if my train had got in on time). Ken Campbell. Rufus Harley. Iain Banks. Pete McCarthy. Stephane Grappelli.‎

These are all people that I saw perform at my first ever Edinburgh Festival in 1989, the 30th anniversary of which we are celebrating right here, right now.

They're also all dead these days, which puts a minor crimp in the celebrations.

Good news, though: quite a lot of the performers I saw in Edinburgh in 1989 are not dead. A few of them are still performing, and will even be there at the Festival this year. So if there's one thing I'm planning on doing to mark the 30th anniversary of my Edinburgh debut, it's revisiting a few of those old buggers to see how we've all changed.

Apart from that, there aren't any major changes to report: as has been the case since 1998, I'm heading up to Edinburgh for a week along with a collection of Spank's Pals, and between us we're going to gorge on the best that the International, Fringe and Book Festivals have to offer.

It has to be said it's been a lot harder to organise this year, though. As the city's been raising concerns about the negative impact of cultural (and other) tourism, and performers are struggling to cope with sky-high costs, us mere punters in the middle have been left scrabbling for an ever-diminishing number of cheap student flats and discounted rail tickets. (And that's before you get to the belated announcement in early June that we wouldn't be able to get trains back again.)

The student flats, in particular, were in such high demand that I had to hit the redial button on my phone 270 times in a row on the morning they went on sale. (Luckily, buying tickets for Oasis at Knebworth back in 1996 turned out to be useful practice.) Somehow, we prevailed, but it's made me a little nervous about what the process is going to be like next year.

Still, we've got a few months until we need to start worrying about that. In the meantime, we have Alan, Anna, Anne, The Belated Birthday Girl, Charmian, Diane, Eve, Kate, Lee, Lesley, Llyris, Martin, Martyn, Nick, Pam, Rhian, Sara, Stephen, Thirza, Wendy, Yvonne and yours truly: yes, that's 22 of us this year. I'll be doing the usual daily updates here, and hopefully the rest of them will be chipping in whenever they feel like it.

30 years after my first Edinburgh, here comes my 22nd. Have I actually learned anything? Watch this space.