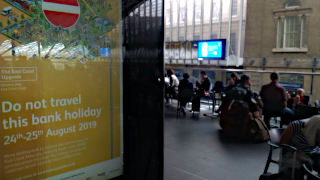 In all of the excitement (or whatever) of discovering that LNER are unable to run a train service that'll get us back from Edinburgh to London next weekend, we've overlooked one small detail: this is the first year that we've travelled with them. Last time I organised one of these, the line was being run by Virgin Trains East Coast, and good riddance to that particular shower of arseholes. LNER have now taken over operation of the London-Edinburgh service, and I was keen to see how they'd handle transporting eleven of us on one of the busiest weekends of the year.

The answer? Reasonably well, actually. The train isn't as ludicrously overcrowded as it has been in previous years, and the journey goes by punctually and without too much hassle, so we can amuse ourselves with gossip and light planning. If you want to pick holes, you could take issue with the paper running out in the toilets, which leads to a wonderful wordless image: having had a fruitless argument about it with one of the train crew, a woman stomps up to the buffet, grabs a handful of serviettes from the bar, and stomps off again. Some things are outwith of LNER control, though, and we're wryly amused that after over four hours of travelling in glorious weather, huge grey clouds start appearing in the sky just fifteen minutes away from town.

We pick up two more of our party on our arrival at Waverley, and they all head off directly to our flats, while The BBG and I walk to a separate location to collect the keys. My comedy GPS takes us and our large suitcase on a walking route which starts by sending us up the Scotsman Steps, which I've somehow managed to avoid in my 30 years of coming here. Still, that route also sends us past Blackwell's bookshop, and we take the opportunity to pick up a copy of The List Eating And Drinking Guide, which has been our bible for as long as The BBG has been coming on these visits and telling me 'no, we are not having dinner at bloody Greggs'. Once we've picked up the keys, along with what The BBG insists is an unnecessary amount of non-GDPR-compliant paperwork, it's off to the flats to let everyone else inside and start organising ourselves.

After unpacking, the first order of business is popping round to the shops to pick up essential supplies: and it's while we're walking back from there that those huge grey clouds deliver on their promise and start chucking rain at us. This gives The BBG and I the opportunity to wait in the flat for it to dry up, and look in The List for dinner options. I'm delighted to discover that after my whingeing to them two years ago, they've put the maps back inside the guide (although they've had to move quite a few of the restaurant reviews online to make room). This makes it much easier to look at our walking route for the evening and find a suitable place to eat on the way, which is the main reason why we end up dining at Ransacked Black Oven, although there's also a degree of curiosity about what its name means. It turns out to serve Persian street food: we get a couple of their excellent soul bowls, loaded up with tofu and shawarma chicken as appropriate, along with potatoes, miscellaneous salady bits and warm tasty flatbread. The List lists one of the negative points of the place as 'beer served in schooners', but we recognise that as code for 'craft beer wankers welcome', and a couple of local brews from Bellfield and West wash it all down nicely. It's all very good stuff, even though your trousers may be covered in flatbread flour after.

This sets us up for our week rather well, because on the train up The BBG was lamenting about how many of the shows we'd booked so far were things we were already familiar with. Edinburgh should be about the new, the unexplored, the unfamiliar - and choosing a new restaurant purely on its location and name is a perfect example of the approach we should be using when it comes to choosing our entertainment.

This makes it all the more ironic that we're officially starting our 2019 Festival by seeing John Robertson's The Dark Room for the second time.

The premise of The Dark Room is surprisingly simple: it's the direction it goes in from that premise that makes it complicated. Robertson starts by breaking down the audience by the decade of their birth, and insisting that people like himself who were born in the eighties had it best because of one thing - text-based adventure games. And he's going to prove it by projecting his own text-based adventure game onto a big screen and inviting audience members to play along. If you win, he will personally withdraw £1000 from a nearby ATM and hand it to you. If you lose... well, it's not going to be nice.

The Dark Room has been on tour for eight years now, and has been playing to bigger audiences every time. It's easy to see why - it's a show that bears, if not demands, multiple viewings. When The BBG and I first saw it a year-and-a-big-bit-ago, it didn't quite fly: there were projection problems, and an audience of pre-Christmas drunks kept making the same mistakes over and over again. But we got to learn the key catchphrases, and knew when to yell them this time round. This particular night's audience is the ideal mixture of regulars and first-timers, and there's a real sense of momentum as the hour progresses: each contestant is picking up on clues discovered by earlier ones, and we seem to be getting closer and closer to the solution. And you know that many of the people seeing the show for the first time tonight will be desperate to come back, because they know they can solve it next time...

It's a show that's permanently on the brink of collapse, and you can tell that Robertson likes it that way. Whether he's deliberately disrupting things by picking fights with audience members, or accidentally disrupting things (at one point in this particular performance, he manages to destroy one of the venue lights with a French loaf by mistake), he maintains a constant sense of danger throughout. You might think that because you're sitting near the back of the auditorium, at the fenced-off end of the row with a sheer drop on the other side, you'll be safe. You'll be wrong. But please don't let that put you off. 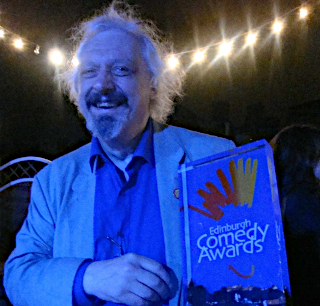 Peter Buckley Hill is retiring this year. At the age of 71, with an illustrious Fringe career behind him, I doubt anyone would begrudge him the time off. He's best known for Peter Buckley Hill And Some Comedians, one of the earliest free shows on the Fringe (reviewed here in 1998 at the bottom of this page) and the one that effectively kickstarted the concept of the Free Fringe itself - shows run at low cost, with free entry and an audience collection at the end. As imitators have come and gone, the Comedians show has ploughed on regardless, gradually morphing into a showcase for the wider PBH Free Fringe.

PBH himself was threatening to retire back in 2016, and his Comedians show that year was subtitled The Final Aardvark to emphasise this. It didn't really work out, sadly: too small an audience rattling around inside too large a venue, and on the night we visited there was one act that stank the place out something rotten. I expressed regret at the time that this would be the low note on which he'd be leaving us.

But three years later, he's back with Peter Buckley Hill And Some Comedians XX, his twentieth and really final outing for the format. The Roman numerals seem appropriate in this case, given the new venue for the show: the tiny basement of Ciao Roma, an Italian restaurant with SPQR banners and Roman legion memorabilia plastered all over the walls. He takes this as an opportunity to riff on the joint themes of Ancient Rome and Italian cuisine to splendid effect, at one point insisting that the singular form of linguini is 'linguinus'. (People always give me funny looks whenever I suggest the same thing applies to panini.)

PBH has, to be brutally frank, looked like death warmed up on the last few occasions I've seen him (generally towards the end of a long Fringe run). It probably works out better for him that this final show is half the length of his previous ones, with two guest comics rather than four. Of the night's guests, Kate Smurthwaite (who we first saw at one of these things in 2013) is sharp and funny with some great stories: Aaron Levene is a little one-note with routines about his appearance and his health problems, but there are a few decent chuckles in there.

As for PBH himself, he's relaxed and visibly having a good time for once, though lamenting how his song parodies are now being performed to an audience that doesn't remember the originals of The Banana Boat Song and Under The Boardwalk. Nevertheless, he notes that his older material is still getting bigger laughs than the new jokes. "You're an old shite audience, aren't you? I don't mean you're an old, shite audience, of course..." We happily toast his upcoming retirement with a glass of Wander Beyond's La Catrina imperial stout at Salt Horse on the way home. Enjoy your pipe and slippers, PBH. ("Smoking crack and spanking rentboys," as he puts it.)