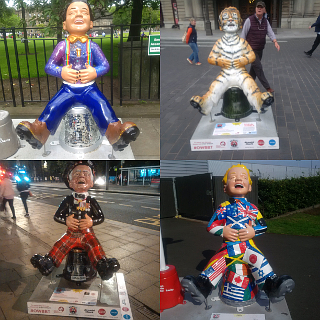 Well, we can wrap this up fairly quickly.

King's Cross station is closed for the whole Bank Holiday weekend, so our usual routine of getting a collective train back to London is completely out the window. We're each taking our own variations on planes, massively-diverted trains and automobiles to get back home, with some people leaving late on Friday night or incredibly early this morning. By the time I'm doing my 9am rounds of our flats to make sure everyone's ready to go, a good half of our party has already left. The rest of us say our goodbyes, and then we're all off on our separate ways.

So, as there's no more actual Edinburgh Festival to write about here, a few notes on the week that's just gone (with more notes from the Pals here). To be honest, the preparation for this week has been the most stressful I can recall: the double whammy of the widely-acknowledged accommodation shortage, coupled with the arse-clenching business of our final day's travel, made me wonder if I could actually ever enjoy this festival again. Hopefully the latter won't be a problem next year, though I have a horrible feeling that the former isn't going to get any better. We'll have to see.

But once we actually got into Edinburgh, everything was fine. There were a couple of lowlights amongst the shows - Musik, Phil Ellis and Greg Proops are the ones that immediately spring to mind - but I'd say that the latter two of those were more 'not for me' than actively bad. (I have no idea what the people who've been enjoying Musik have been smoking, though.) Most of it's been thoroughly enjoyable, with Daniel Kitson's Shenanigan standing head and shoulders above the rest for sheer ingenuity as well as lots of laughs. I think I'd assumed that I'd be taking things at a slower pace this year, but those two six-show days at the end of the week show how futile a plan that was.

The plan to rewatch acts from Edinburgh '89 at Edinburgh '19 can be considered much more of a success. In the end, I think it counts as five, maybe six: Roger McGough, Andy Smart, Simon Munnery, Attila The Stockbroker (so good I saw him twice) and Jerry Sadowitz, with some uncertainty about whether Simon Rattle was there in 1989 or not. Shall we say five and a half? Because that would end up exactly mirroring‎ the number of people I saw in 1989 who are now dead: five, plus some uncertainty over whether Douglas Adams counts, given that I had a ticket for him but didn't go. I'll be keen to see how many of us are still around in 2049, assuming the city of Edinburgh hasn't turned into some sort of orange-and-teal dystopia like the Blade Runner sequel. 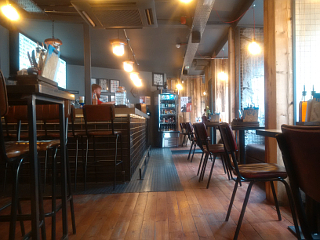 So what route are we taking to get back home from Edinburgh? You can read the post title, you'll have worked it out by now. Nevertheless, let's walk you slowly through the longest pub crawl I've ever been on.

People tend to look excited when you tell them you're planning a day trip to Perth. Then, in my experience, they look confused when you reveal you're planning to spend no more than two hours there. Once they've worked out that you're going there solely to visit BrewDog Perth and come straight back again, they're pretty much reduced to a resigned shrug. And who can blame them?

There are risks involved in this side trip, if we're honest. We can't leave Edinburgh before 10am, to make sure the flats are cleared out: we have to be at Edinburgh Airport for a 5.30pm flight back to London: the trains from Edinburgh to Perth are infrequent and take the best part of an hour and a half each way. On the day, there's the added discovery that the trains could be even more erratic than usual, with a run of short-notice cancellations and the increased load on the network caused by the Scotland-France rugby match happening today at Murrayfield. It almost seems like fate is taunting us when we pull into Perth station pretty much on schedule, and then spend far too long trying to navigate the 15 minute walk to the bar: not only are the exits at the station appallingly signposted, there's also the small matter of Google Maps getting a couple of the street names wrong, particularly the streets that change name a couple of times during their length.

But eventually we get there, with just enough time to grab two pints and two pizzas before heading off again. The pints are Speedbird 100 (a citrus pale ale initially brewed exclusively for British Airways, and I'll have more to say about that in a few weeks) and Lone Star Gazer (one of their experimental Fanzine range, a chilli hopped brown ale with an interesting afterburn): the pizzas are White Trash and Halloumi, and are up to the usual standard, if a little crispier than usual.

It often surprises me when a new BrewDog bar (this one opened in November 2018) is small and dinky rather than a mega beer palace, and that's the case here. BrewDog Perth feels less like a post-modern attempt at creating a classic pub, and more like an actual classic pub, with the aged wood surfaces for once looking genuine rather than an affectation. It starts off quiet when we arrive just after noon on the Saturday, but within an hour and a half it's nicely buzzing, with lots of small groups coming in for lunch. The BBG makes an interesting observation: rather than this being a bar aimed squarely at the Craft Beer Wanker community, this is a neighbourhood pub that happens to serve really good beer. That strikes me as a worthy long-term goal for BrewDog to aim for.

It could so easily be a trendy hipster bar, as it's obvious from the neighbours that we're in the arty quarter of Perth - within spitting distance there's a concert hall, theatre, gallery and artisanal coffee roaster. If we had any spare time on this visit, the obvious place to go would be the Perth Museum & Art Gallery, which is just over the road from the bar. But we don't. All we really have time to do after our lunch is stroll 100 yards or so to the bridge, look out over the river Tay, say "oh, that's nice," and then head back to the station for our train back towards Edinburgh. 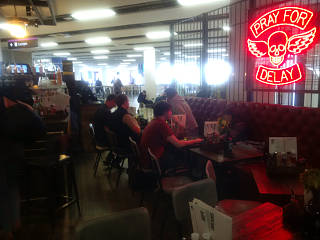 We're not going back to Waverley station, though: as I said, trains back to King's Cross aren't an option this year. So we get off the train at Edinburgh Gateway, where we can connect with a tram to the airport. This is the point where we finally encounter the spectators from the rugby, who appear to all be on our tram at the same time, though luckily they all get off early at Ingliston Park & Ride.

At the airport, I suddenly remember when we booked our flight back in March, and ended up going with Flybe as they were the cheapest. At the time, Flybe were having financial difficulties, and we had to consider the possibility that the airline might have gone bust by the time we were due to fly. They haven't, but it'd be hard to tell from the evidence at Edinburgh Airport: Flybe have a small number of auto check-in machines, all but one of which are broken, and the bag drop turns out to be one woman who'll chuck your suitcase onto a conveyor belt if you can get her attention for long enough. Eventually, we get ourselves checked in and through security, and...

...well, remember when we visited BrewDog Aberdeen Union Square, and I pointed out in my best Larry Fishburne voice that this sure enough was a bizarre sight in the middle of this shit? The same has to be said of BrewDog Edinburgh Airport.

BrewDog's first airport bar - more are on the way, but no firm plans as yet - is in a slightly awkward position in Edinburgh Airport, occupying a small island in the space between gates 11 and 12. It's particularly awkward because to get there from security, you have to walk past a giant Wetherspoons, which must ruin their chances of picking up passing trade: people who just want a drink will stop at the first bar they see, you'd have to be specifically searching for BrewDog to end up here. Mind you, we are, so that's not a problem.

It's another small bar, but that's the nature of bars erected in the space between two gates in an airport. On the downside, it's a bit cramped, and it's mainly limited to BrewDog's headline range of beers (apparently a few weeks ago there was a problem which knocked out all their taps and they could only serve people cans, but that's fixed now). But those headline beers are just fine for the kind of casual trade this bar's trying to attract: Lesley, for example, joins us for a quick drink (she's on a slightly later flight than us) and appears to enjoy it just fine.

It's also interesting to see the more pub-grubby menu this bar offers, possibly in an attempt to compete with the nearby 'Spoons: all-day breakfast, hot dogs, hot sandwiches, even the odd salad. If you just want a snack, they've brought back the potato tots that used to be one of our favourites on the old bar menu: they're fine, but they're oven baked, and therefore not as good as the fried ones we used to get.

Still, it's a fine pitstop before we get on our flight, which passes without a hitch. The problems only really start when we catch the Heathrow Express back into London, which ends up being about thirty minutes less express than usual because of problems with the overhead lines. By the time we get into Paddington, a week's worth of sleep deprivation finally hits us and hits us hard. We were pretty hungry when the plane landed, but there aren't any restaurants in terminal 2 worth a damn: we haven't got any food back in the house, and it'd take us ages to cook anyway. We're standing in Paddington station considering the most cliched and obvious solution to our dinner dilemma. And we take it.

Which is why we wrap up the day at BrewDog Paddington, where we grab a couple of burgers and two final pints. This is what turns our two-bar adventure into a three-bar crawl, where we've used three trains, a tram and a plane to cover a distance of around 525 miles between the bars. This is officially the longest pub crawl either of us have ever been on. And if that's not performance art, then I don't know what is. Being a monkey, and all..