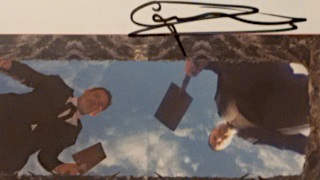 Hey, look over there, it's Guy Masterson's autograph! We're not seeing anything starring the Fringe theatre legend this week, but while we're in the queue for another one of his productions, he's walking along it selling programmes and offering to personally deface them with a Sharpie. Amusingly, he doesn't actually tell you he's the show's director, so to the uninitiated he just looks like the world's most arrogant programme seller. Still, it's nice to see how he's still so hands-on.

There's another name that's attracted us to Shaving The Dead: the play's author, Owen O'Neill. He was a major fixture on the comedy circuit in the late eighties and early nineties, to the extent that it surprises me that he isn't on my list of People I Saw At The 1989 Festival Who Are Still Knocking About. He was one of the first comics I can remember who started blurring the line in his Fringe shows between straight stand-up and more theatrical storytelling: it may have only involved turning the lights down during a less funny bit, but he was still one of the first. So moving into writing plays seems like an obvious step, and it's something he's been doing for over two decades now.

Shaving The Dead is a perfect Fringe theatre setup: two characters sitting around a single prop. The characters are undertakers Eurig (Simin Nehan) and Connor (Alan McKee), and they spend the whole play guarding a coffin while waiting for a mysterious client to turn up. At one point, Eurig asks "do you think our job is making us desensitised?" Given some of the wild topics and diversions that have already come up in their conversation by then, that may well be true. But there's a bigger question to be asked: why are they being paid a bonus of several thousand pounds for this particular job?

O'Neill wears his influences on his sleeve: the repetitive nature of the undertakers' conversations has echoes of Beckett, while the setup of two men in suits in an increasingly sinister situation makes you think of Pinter plays like The Dumb Waiter. But the jokes are pure O'Neill, and - rarely for a stand-up comic turned playwright - are driven by the two men's distinctive characters, rather than sounding like a monologue arbitrarily split between a couple of people. It's a solid piece of work that seems to be getting merely adequate audiences, and it should be doing much better than that.

Our second play of the day involves space exploration in more ways than one: The Space runs a ludicrous number of venues in the small area around the junction of the Bridges and the Royal Mile, and it takes us a while to track down the Space On North Bridge. It turns out to be a small cluster of repurposed conference rooms on the first floor of the Hilton Hotel. As we enter the one they're using for Chaika: First Woman In Space, they're playing Go by Public Service Broadcasting over the PA. "Not Valentina?" asks The BBG. No need to worry, it turns out they're saving that for the end.

You've got enough clues in that previous paragraph to work the rest out: Mark Westbrook's play is the story of Valentina Tereshkova, the first woman to travel into space, told in a partly fictionalised version of her own words. Ingeniously, and in an amusing contrast with Shaving The Dead, this is largely a monologue split between multiple actors: the cast of seven young actresses from Acting Coach Scotland take it in turns to play Valentina, as well as the supporting characters in her tale (there's ingenious use of a velcro nametag to help us keep track of which one's playing her at any given time).

In a tight little fifty minutes, we learn from Valentina about the problems of a young Russian trying to find her way into the space race, taking the roundabout route of becoming a parachutist: the political manouvering that took place behind the scenes which led to her being chosen: the climactic thrills of her actual flight, and the anti-climax of what happened after that. The cast take on their shared lead and multiple bitparts fearlessly, aided by Luke Kernaghan's imaginative staging within a tiny space using minimal props: it all adds up to a satisfying piece of small-scale theatre. 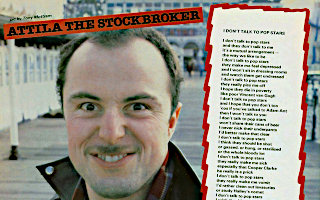 We grab some scrummy cannoli at Italian On The Mound, and run to Waverley station to co-ordinate a rather rushed mid-week change in personnel: bye Sara and Stephen, hello Anne and Thirza. Within 45 minutes of Thirza's train pulling in, she's hitting the ground running by joining The BBG and me to see Attila The Stockbroker at Bannermans. Attila's the next stop on my Class Of '89 list: thirty years ago, he was doing shouty poems and mandolin-driven political songs at Tic Toc, a venue run by none other than Jon Gaunt. We all know how Gaunt's turned into a right-wing loon since then, but it worries me that I haven't seen much of Attila since those days. Maybe he's become a Tory now?

Nah, he hasn't. One nice thing that happens during this show is that he explains how he kept away from the Fringe for the best part of two decades, frustrated by the small independent venues dying out and the major ones working on a pay-to-play model. When he discovered how the PBH Free Fringe operated in 2016, he decided it was time to come back to Edinburgh, and everyone's the better for it.

It's a show of two halves, and you can tell how delighted Attila is by how different those two halves are. For the first thirty minutes, he's in spoken word mode. Old favourites are given a fresh update (so Libyan Students From Hell is now Corbyn Supporters From Hell), while his more recent poems show that he's still engaged, both politically (his ode to Grenfell is especially powerful) and personally (he complains that Brexit, Trump and bladder cancer all happened to him in the same year). He's a generous performer, at one point drawing a brief history of alternative performance poetry from The Mersey Sound and The Last Poets via himself to Kate Tempest, and applauding Stormzy for effectively headlining Glastonbury with a spoken word performance.

The second, more musical half sees Attila go into unexpected territory, at least unexpected by me. When he used to bash out punk tunes on a mandolin in the old days, I'd assumed it was nothing more than a budgetary choice: but it turns out that he's had a long-term interest in early music and its instruments, and has always wanted to rework 17th century Olde English tunes in the same way that the Pogues reworked Irish folk. So this is where he pulls out a wide collection of period instruments: "you can see why some of these became obsolete," he notes as he blows into one and a noise like a constipated mosquito comes out. We get a short set of songs old and new about the radical movements of 1649: the Levellers, the New Model Army and other bands loved by scruffy kids in the eighties. (Including the Ranters, whose name was stolen by Attila and his generation of street poets.) This is all a dry run for a last-minute show happening this Friday at St Cecilia's Hall, the traditional Scottish home of early music: we may have to adjust our schedules. 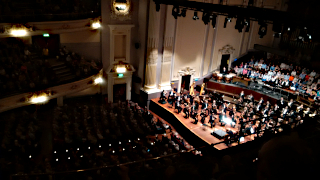 Because there isn't enough stress in our lives, we attempt to cram in dinner at the popular Mother India Cafe during the short gap between Attila and our final show of the day on the other side of town. There's an initially scary half-hour wait for a table, but once we're sat down food starts arriving pretty quickly, and in good time we're off to the Usher Hall for a restricted view of the London Symphony Orchestra. (Yes, I know, we could get that at home, but we've only got two International Festival events this year, and this is one of them.)

It's another programme of two halves, and to be honest I'm more here for the first half, which is John Adams' Harmonielehre. It's one of his earlier pieces, dating back to the mid-eighties, and it kind of shows - the minimalism of its opening and closing sections owes a lot to Philip Glass. What makes it particularly interesting is the lush romantic melody that's layered over the framework of repetitive chords and jagged rhythms, and the tension between the two styles. It makes for a powerful piece with several huge climaxes, particularly in its first section: I don't approve of the woman who yelled "Wow!" immediately after the end of the movement, but I can kind of understand it. By contrast, the second half performance of Rachmaninov's second symphony - interestingly, conducted by Simon Rattle without the use of a score - is just the lush romanticism without the minimalist trappings. It's less interesting to me as a result, but it's undeniably gorgeous, particularly in its third movement.

Something strikes me during this performance, though. Back in 1989, I was in the Usher Hall watching the City Of Birmingham Symphony Orchestra playing Gershwin. Simon Rattle was their principal conductor during that period. Does that mean I need to add Rattle to my list of people I saw in Edinburgh in 1989 and 2019? I've tried searching the internet but can't find a definitive answer. Maybe I'll just say yes, anyway. Finally, there's something that links Simon Rattle and Attila The Stockbroker.