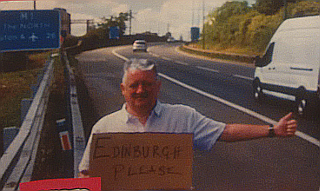 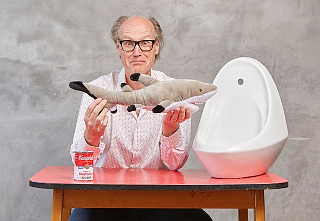 It's been a real pleasure to read Spank's recollections of his first Edinburgh back in 1989, and quite a feat to find five acts still performing at the Fringe in 2019. As Spank has already mentioned in these pages, it was also Cha's (one half of the Muses) and my first Fringe that year, and we met Spank totally by chance in the queue for the darling of the Fringe at the time, a Steven Berkoff play called Lunch. It was the first multimedia show I ever saw, and by far the most memorable with its mixture of live and video action. Along with a numbers of firsts that year I saw my first immersive play Hooligans, that really captured the nastiness of some football supporters at the time, before it came a middle class leisure pursuit: the immersive and visceral production really hit home.

So what were my fave things this year? Well let's get the first night show out of the way shall we. Nicholas Parsons has been coming to the Fringe since it started in 1947, but made the spectacular mistake of booking into the Cabaret Bar at the Pleasance (graveyard of many good comedians, John Bishop and Andy Parsons to name but two), and wound up in hospital for the duration of the fest. Frank Skinner on the other hand embraced the venue, and won the Perrier award playing here in 1991. But it has to be said when we saw him this year, it was the same old stuff, write a few topical jokes and see how long he can interact with the audience, until he's in danger of losing their attention, then tell a joke. Unfortunately this template has been followed by a multitude of comedians since, and very few have the skill set to pull it off.

The best thing I saw was Will Gompertz: Double Art History, a tour de force of making a subject you like into something even more interesting, by providing lots of interesting facts about modern art from the Impressionists onwards. In the first 10 minutes alone we had a game of 'can you tell your Monets from your Manets?' Manet never saw himself as an Impressionist and painted black horizontals in his pictures, whereas Monet started the Impressionist movement with his picture Sunrise (1872), painting outside and using more fluid and quickly applied brushstrokes than the older artist. But as Will pointed out, the composition of the painting bears an uncanny resemblance to Turner's sunset painting The Fighting Temeraire (1838), and it is known that Monet came to London and studied the Turner painting. The whole hour was full of such facts.

Better wrap things up fairly quickly before the monkey falls asleep. Beer of the week goes to the oldest brewery in Scotland: Belhaven celebrated 300 years of brewing with the production of a modern style IPA appropriately called 1719, flavoured with Centennial hops amongst others, a nicely balanced session beer. Restaurant of the week goes to Aizle once again, for another superlative meal. Find of the week was 83 Hanover St, a Chilean tapas joint: a perfect replacement for the much loved Barioja, which closed down in 2014 and was a favourite with Nicholas Parsons and the Just A Minute team. Biggest disappointment of the week was Hendersons: they go from bad to worse, even changing the recipe of their much loved vegetarian haggis to include quinoa instead of oats. Apparently the latter contains gluten, sad but true.

Well that’s about it, a huge thanks to Spank for all your efforts, without you this trip would never have happened, it's easily my favourite week of the year, there's so much to enjoy, it's an assault on the senses, can Spank possibly pull another rabbit out of the hat and find us some accommodation next year? Fingers x. Back in 1989 Eve, Nick and I came to the Fringe with the Bristol Players’ production of Berkoff’s Agamemnon, and bumped into Spank while we were there. 30 years later, here we were again. Inevitably, a lot has changed in this time, in particular:-

- The absence of Berkoff at the Fringe today – in 1989, he was the must-see playwright, but doesn’t seem to feature at all these days.
- The absence of late-night venues back then – our show didn’t finish until well past midnight, but finding somewhere for a few post-show bevvies was a real challenge.
- The Fringe programme was a fraction of the tome it is now, and the comedy section a smaller proportion. Also the Traverse was located in the Grassmarket and a more low-key venue than it is now.
- The rise in the gastronomic standard of the city – though we did visit Bar Italia that year, which still remains a regular haunt today.

However, Edinburgh is still as wonderful a city as it’s ever been. And overall I felt the shows I picked were of a decent standard; for me the following were the two stand-outs:-

- The Shark is Broken: Guy Masterson’s production about the relationship between the three stars during the filming of Jaws was well up to the standard of last year’s outstanding The Marilyn Conspiracy. The script was sharp, the characterisation of the three actors was spot-on, and Ian Shaw so resembled his father you could have believed Robert was there in person.
- Before I Forget I Love You, I Love You: Pip Utton has long been a favourite performer of mine, and this one-man show about a couple living with Alzheimers was a very sensitive performance which, while heart-rending, also managed to be warm and humorous despite the subject matter.

As mentioned above, Edinburgh has seen a big rise in gastronomic standards, and virtually all the regular haunts visited this year seemed to have raised their game even more: the exception being Hendersons, which sadly retains its “if it ain’t broke, don’t fix it” award I gave it last year.

Best restaurant newcomer award goes to 83 Hanover Street, a great Chilean tapas eaterie (where you can also eat at the bar), which has finally ended the search to replace the late lamented Barioja which closed several years ago.

It’s been a great festival to mark the 30th anniversary, huge thanks again to Spank for getting it all together and to the Pals as always for their company. Let’s hope the accommodation challenges can be overcome for our return next year! 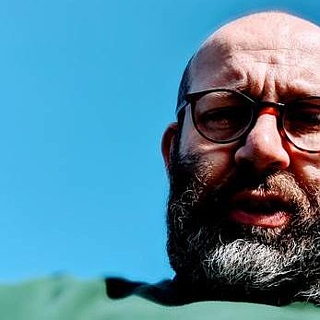 As Spank and I saw everything together this year, and didn't really have any disagreements of note over any of it, there's going to be quite a bit of overlap between my highlights/lowlights and his. Although he only went so far as to actually call out Shenanigan as a highlight. I agree with him that that was the best thing I saw by some way, but I'd also like to call out Russell T. Davies and Attila The Stockbroker as the second and third best things I saw, respectively.

I didn't really know what to expect of Rusty before we got there, but I found him refreshingly open and generous in his comments, and very entertaining and engaging. This is the first time they've opened out some of the Television Festival to Fringe audiences, and I hope they do more of this in future. And pleasingly, Attila with his poetry was as angry and as relevant as ever, with the early music part of the show a complete revelation. I enjoyed the extended early music performance at St. Cecilia's Hall, too, with the bonus of getting to see the venue itself, but it was the combination of the poetry and the music that made his Bannerman's show such a highlight.

Easily the best of the stand-up acts we saw was Desiree Burch, whose full show lived up to my high expectations from the couple of times we'd seen her do short spots. And we saw some great music performances, particularly The Scott Walker Songbook – which could have been a painful failure if Andy Davies didn't have a voice which, while obviously never going to be Scott's, at least was able to do the songs justice –  as well as Bach's Multiple Concertos, and Philip Glass: Minimalism At The Organ. We also went to some pretty good theatre, too, with Guys Dolls And Pies, Chaika: First Woman In Space, and Shaving The Dead all being great examples of the sort of thing Edinburgh does well.

In terms of lowlights, the only thing on reflection I'd probably add to Spank's list of Musik, Phil Ellis and Greg Proops would be Matt Forde, who at times allowed his opinions on Jeremy Corbyn's leadership of the Labour Party to get in the way of remembering to be funny with it. Still, it was overall a nice enough way to wrap things up, with a number of the Pals attending, and going for a last night's drink at Holyrood 9a after.

Speaking of drink, it was nice to get to hit pretty much all of Edinburgh's central craft beer spots, with the Salt Horse rapidly becoming one of my favourite bars (so good we went there twice), and the new Fierce bar looking likely to become a firm favourite in the New Town in future. Food-wise, as well as great meals at a couple of old favourites (The Outsider and David Bann), I was very pleased to add a few new places. Top of the list would probably be El Cartel on Thistle Street – although they really could improve their beer choices – but I also very much enjoyed both Ransacked Black Oven and Bread Meats Bread, the latter having a surprisingly good selection of veggie options, given the restaurant's name. I hope all manage to survive long enough for us to go back in future years, and for them to become new old favourites for us.