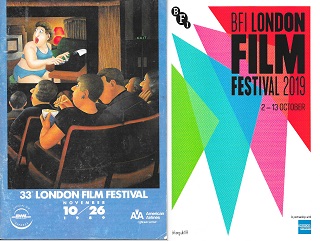 If anything, this is a more significant anniversary than the Edinburgh one, because I've taken years off from Edinburgh (one in three regularly since 1997) but never from the LFF. As I've pointed out to the people I've worked for since late last year, all my previous employers have had to get used to me taking a week or two's leave in October or November to sit in cinemas for ridiculous periods of time: now it's their turn.

They're fine with it, in case you were wondering. Which makes this LFF feel a bit more secure than last year's, back when my employment situation was looking very unsteady indeed. My first interview for the New Moderately Responsible Job In The Computer Industry actually took place during LFF 2018, though I didn't feel the need to mention it here at the time. Job uncertainty had a measurable impact on the number of films I saw last year, and hopefully you'll be able to notice the improvement this time round.

Hey, you know who else has a more certain job than she did this time last year? Tricia Tuttle, that's who. In 2018 she took over the running of the LFF while Claire Stewart was on a mysterious gap year: at the Closing Gala, it was announced that she'd be taking on the role full time. Based on the evidence of the programme for her first full year, there aren't any major changes to report: they're not programming to the Tricia Tuttle Taxonomy Table as yet. Although it's interesting to note that following a couple of years of awkward faceoffs with underpaid staff on picket lines, this year the number of screenings being held at Picturehouse and Cineworld cinemas is precisely zero. (And there's one wee innovation that might be of interest to anyone who's still uncertain whether to join in or not: a list, updated hourly, of films that still have tickets available.)

Tuttle and her team held an LFF preview night for BFI members on the day of the press launch, and I was there. It's the first one I've been to since 2002, which was coincidentally Sandra Hebron's first year in the role. It does seem like her main programmers are enjoying their job immensely, and the enthusiasm with which they introduced the clips from their choices was infectious. I think there are at least two films I'm seeing this year purely on the basis of those preview night clips.

Which ones are those? Well, you'll have to wait and see. Once again, I'll be bringing you day-by-day coverage of the films I'm seeing, for the 22nd year in a row. Yeah, I really should have found a way to monetise this shit by now, but let's not think about that too hard. Watch this space.