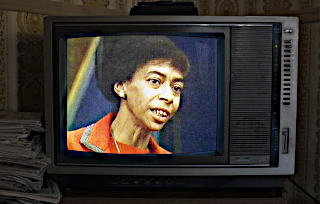 There’s no better way to get into what this film’s about than its opening caption, which explains that Marion Stokes was a Philadelphia woman who recorded everything off her TV - and several other ones at the same time - for over three decades, between 1979 and 2012. When she died, she left behind an archive of 70,000 tapes. All recorded in long play mode. (Sadly for me, that final detail is the one which made me go 'ooh, that's a bit much.')

The temptation is to write her off as a hoarder: the nice thing about Matt Wolf's film is that it works overtime to convince you it isn’t as black and white as all that. We first see Stokes as a young woman, married with a kid, and politically active in the sort of way that makes Americans nervous. After separating from her first husband, she spent quite a bit of time working on community television: clips show her as incredibly smart and articulate, especially on the subject of how TV is presenting our lives back to us, and who makes the decisions on how that presentation works. Once she acquired her first Betamax in the late seventies, it became her primary research tool - a way of keeping a record of how the news was being reported, and how the narrative presented to viewers changed shape over time.

You could get an entire movie - lots of movies - just from a rummage into the material Stokes taped, most of which was never kept by the original broadcasters. But there’s so much more going on here. There’s the tale of how she became incredibly wealthy through a second marriage and canny investment in Apple stock. There’s the way that she and her new husband moved into an apartment building and became virtual recluses for many years, to the distress of their families. There’s the small surrogate family she built around herself of helpers and servants, all getting dragged into a project which by that time involved multiple video recorders all on the go simultaneously. And, inevitably, we need to consider the ultimate fate of those 70,000 tapes.

That’s a lot of ground to cover in a single film. And if Wolf never quite solves the problem of telling the life story of someone who spent a lot of their life locked in the house all day watching TV, the other aspects of his film compensate for that just fine. There’s never any judgment passed on Stokes’ mental state: as someone points out, if she was an institution collecting this material she’d be feted for her research, but as she’s an individual - and a black female one to boot - she’s treated as an outlier at best. Stokes needs to be taken seriously because she realised, long before virtually anyone else did, how important it was to capture the way the news presents the world in real time, and that it should be archived for others to analyse. Wolf himself does that a few times in this film, re-arranging clips to present familiar news stories in a new way - his depiction of September 11th is particularly impressive, although it has to be noted that it’s been done before with another disaster. Stokes' legacy could well end up being that this film is just the first of many. 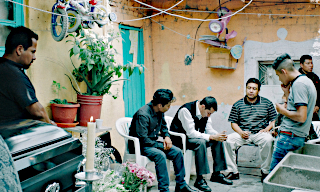 This one was The Belated Birthday Girl’s choice. Our original plan for this evening was a documentary that I insist on calling Cold Case Hammersmith, but it sold out almost immediately on the first day of ticket sales and has remained sold out ever since. In situations like this, we usually go back to our b-lists of films and try to agree on an alternative screening. That frequently involves compromise, and one of us going to a film purely because the other one is interested in it and you can't find an alternative. In those situations, you find yourself going into a movie knowing even less about it than usual. And I’m glad that I did that here: Workforce isn't necessarily a film that relies on narrative twists, but part of what makes it interesting is the uncertainty of which direction it's heading in.

We open on a static shot of a building site that’s held just long enough for you to assume something terrible’s going to happen there, and it does: there's an accident which results in the plasterer Francisco (Luis Alberti) losing his brother. The site bosses, who are already dragging their heels when it comes to paying the workers, refuse to accept any responsibility for the accident or offer the dead man's pregnant widow any compensation. Francisco is outraged by this, and starts taking out little acts of revenge on the company. Initially, they involve him simply breaking into the site at night and taking advantage of its facilities. But things soon move beyond that.

It’s a film with a beautifully designed arc to it. The storytelling is elliptical in parts: in his Q&A after the film, writer/director David Zonana admits that a lot of the pivotal scenes occur off-camera, though he suggests tongue-in-cheek that he only did this because they're the hardest scenes to film. Making the audience work a little to interpret the story is always a good thing, though, and we're given enough detail to follow Francisco's moral path though the story, without being beaten over the head with the reasons why he's made his particular choices. Workforce is a political entertainment that delivers completely on both parts of that description, and one which shows that the current generation of world-beating Mexican directors - Cuarón, del Toro and Iñárritu - has at least one potential successor hot on their tails. 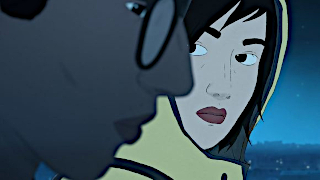 Tricia! Hi. Not sure if you’re reading this, though I think some of your programming team might be. Anyway, just wanted to say that you’re doing a terrific job so far. But if you were looking to do something to make your own distinctive mark on the LFF, have you considered bringing back the Animation Panorama programmes of animated shorts for grownups? I know that you regularly put on a collection of animations for kids, but the programmes that Jayne Pilling used to put together each year contained some extraordinary adult work, and I refuse to believe that nobody’s making shorts of that calibre any more. Particularly when you consider some of the feature-length animation that’s already playing in the festival. Like this one, for example.

Jérémy Clapin's I Lost My Body is based on a novella by Guillaume Laurant. The premise is glorious: we start with a fridge in a lab with a severed hand in it, and watch the hand as it crawls out and makes its way to freedom. As it battles with pigeons, dogs, dustcarts and the basic concept of gravity, we see glimpses of another story - that of Naoufel (Hakim Faris), a young Arabic man now living in Paris. He's just about earning a living as a pizza delivery boy, and struggling to get the attention of one of his female customers, Gabrielle (Victoire du Bois).

In the original novella, the disembodied hand had an internal monologue, giving the reader a way into its story. Clapin and his team tried to replicate this as voiceover narration in early versions of the script, but soon realised it was a stupid idea: it's hard enough accepting the idea of a hand moving around on its own without making it talk as well. The only option open to them was to make the hand silent, and have it react to its surroundings purely through any body language available for the area between the fingertips and the wrist. They pull it off so successfully that you find yourself empathising with the hand, and reacting every time it’s put in jeopardy, which is often. You'll be able to watch this film at home on Netflix from late November, and that's fine: but you won't be able to match the experience of listening to a full cinema audience gasping, wincing and laughing along with the hand's adventures.

The parallel story of Naoufel and Gabrielle has its own charms too, enhanced by the way it's played in a much more realistic register than the hand's tale. You're also pulled in by the ongoing mystery of how their attempts at starting a relationship will ultimately intersect with the Incredible Journey With Body Parts strand. For me, though, once the two halves of the film merge it loses a bit of momentum: as a result, I wasn't all that moved by the final scenes, and found they dragged on a little. Having said that, in the Q&A afterwards several audience members claimed to be still in tears, so maybe I’m just a heartless bastard. Anyway, even heartless bastards will find a lot to love here.