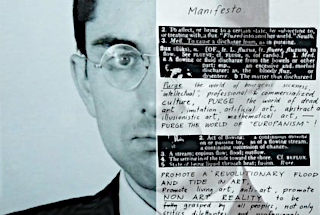 I find this happens more at the Edinburgh Festival, but it's kind of true for the LFF as well: you have certain expectations about films or shows based on the venue you're seeing them in. I mean, yes, the Embankment Gardens Cinema is a fine place to see a film in terms of screen size, sound and so on (although this week it's had to battle against the low-flying helicopters monitoring the Extinction Rebellion protest down the road in Trafalgar Square).  But you know that's where the festival is showing its biggest, safest films: you're not going to come across any major surprises there. At the other extreme, when there's an LFF screening at the forty-seat Studio in BFI Southbank, you know there's an unspoken warning attached: this one's going to be hard work. Particularly if it's showing in the Experimenta strand on a Friday lunchtime. Still, here we are. (Or perhaps more accurately, 'therefore, here we are'.)

If anyone knows the name of Fluxus at all, it's probably because of Yoko Ono - she was one of the most famous artists to come out of the 1960s collective of that name, and John Lennon first met her at one of their art shows. George is a biography of the man who started it all, George Maciunas. We begin with his childhood in Lithuania, where he's already showing signs of creativity with a comic sensibility: while the other kids are making snowmen in the winter, he's building two-storey igloos. After the war, the Maciunas family moves to New York, and George starts to make his presence felt in the art world. We get to see the detailed design work of his early years, but gradually it’s his organisational skills that come to the fore - first assembling a global network of artists with a similarly open and playful approach, then building actual physical locations for them to live and work in, effectively inventing the concept of Soho as New York's artist quarter.

There's a bit of cheap psychology thrown in during the prologue, when we learn about young George’s huge collection of model soldiers, and how he rigorously arranged and organised them while playing. It’s suggested that years later, he was doing the same with artists: the attraction for him was being in control of them. One interviewee points out that many of the art 'happenings' that took place in New York at that time were built around the assumption that the public would get involved, and took that random element to be part of the experience. A Fluxus event, by comparison, was much more tightly scripted - in some cases the script itself was the art - and there was no room in George’s life or art for the unexpected.

Which makes it all the more amusing that the best stories told in this film are about some of his grand schemes that came to nothing. His plan to host a floating community of artists on an icebreaker, for example: or his attempt to buy Fluxus their own own island. (The latter story involves Robert de Niro in some mysterious capacity - if we'd had tickets for his Screen Talk at BFI Southbank later today, we could have asked him about it, but we didn't, so we couldn't.) But George seems happy to have burned up ideas like this at high speed and then moved on to the next thing: after all, most of what he did was a prank of one sort or another, with half a dozen hilarious examples casually tossed away over the closing credits.

Jeffrey Perkins' film may be in the Experimenta section for its subject matter, but it isn't enormously experimental itself. There's some interesting layering of images, some cut-up and repeated bits of audio, and wild typography choices in the stills introducing various artists: but under those trappings lies a well-told story of an interesting life. It's not ashamed to pull the old tricks of biographical documentaries, like saving up revelations until they'll have the most dramatic impact - note, in particular, the avalanche of detail about George's personal life that suddenly emerges in the last twenty minutes. It's a traditional enough biography to deserve a better opportunity than a two-thirds full audience in a tiny room, anyway. Although a screening at the Embankment Garden Cinema would have been really pushing their luck. 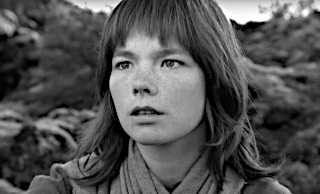 Iceland is on our minds at the moment: let’s just leave that bit of information hanging for now, and come back to it in the future. As a result, seeing an Icelandic film was always part of our plan for this festival. Out of the couple on offer, we went for this restoration of a 1990 Sundance award winner, purely on the basis of one word in the synopsis. See if you can guess which one it is.

Two orphaned sisters - Katla (Bryndis Petra Bragadóttir) and the younger Margit (Björk Guðmundsdóttir) - are wandering the countryside looking for somewhere to live. Katla discovers a family consisting of a widowed father and his son, and uses wiles of one sort or another to get them into their house. The father is happy with the new arrangement: the son, less so. As for Margit, she's started to see her dead mother again, appearing to her in visions.

The key word in that synopsis is, of course, 'Guðmundsdóttir'. The LFF programme note is a little deceptive, selling this as an appearance by 'teenage Björk,' which isn't the case at all: by the time she made this film she was in her mid-twenties, and was already having worldwide success with the Sugarcubes.  So this is absolutely a classic example of a successful pop singer trying their hand at acting to see how it works. To be fair, she's actually pretty great here, in a role that uses her natural fragility as a indicator of her innocence and naivety. A decade later, Lars von Trier would exploit and torture that fragility in Dancer In The Dark, and luckily Björk had acquired a more steely core to her personality by then, otherwise it would have been impossible to watch.

As for the film as a whole, it has the dreamlike feel of a fairytale from the opening voiceover, even before the credit that tells you it's based (loosely) on a story by the brothers Grimm. Writer/director Nietzchka Keene shoots in atmospheric black and white, giving her images the sort of languid airlessness you get with the best folk horror. It turns out that Keene only made two more features before dying at the age of 52, and that's a great shame given the visual promise of this revival. 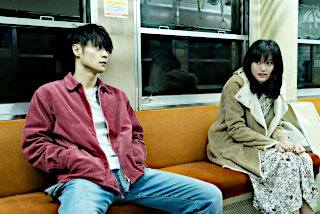 According to the programme, we can't call it the OLS any more, it has to be the OLLS (although The Belated Birthday Girl and I will still refer to it as the BFO). Last year, the LFF had a problem with its Galas and various Special Presentations: they traditionally ran them at the Odeon Leicester Square, but it was closed for a year for renovations, meaning they had to use the Cineworld and other union-busting alternatives. Anyway, this year the Odeon Leicester Square is back back back, although now it's been rebadged as the Odeon Luxe Leicester Square to indicate that the old red velvet seats have been replaced by fancy new leather recliners, as is happening more and more in cinemas these days. As producer Jeremy Thomas points out in his on-stage intro, this has had the unfortunate effect of reducing the Odeon's seating capacity by half so they can fit in all these big chairs, but that's the price you pay for luxury.

More precisely, here's the price you actually pay for luxury: twenty-one quid, making this Special Presentation one of the most expensive films by Takashi Miike we've ever been to. And as regular readers will know, we've been to a lot of them. Two years ago, the director marked the release of his one hundredth film (which also cost us twenty-one quid) by coming along in person for an LFF Screen Talk. Given that workrate, it's shocking to realise that he's only made three more films in those two years, the lazy sod. Still, to justify the Special status we get a short video introduction by the man himself standing next to a Godzilla statue. He insists what we're about to see is a love story, but then he always says that.

First Love is, at its core, the story of a dodgy deal made between a yakuza and a bent cop, who cook up a plan to liberate a large bag full of drugs from the mob and divide it up between them. For ridiculously complex reasons the plan goes completely to shit, and soon the cops, the yakuza and the triads are all chasing after two people. Yuri (Sakurako Konishi) is a junkie girl turning tricks in one of the buildings that the drugs pass through: Leo (Masataka Kubota) is a boxer who’s just been told he’s dying of a brain tumour. Neither of them actually has the large bag full of drugs, but nobody else seems to have noticed that.

The first half hour of this film requires you to hold on tight, as it’s doing a huge amount of narrative setup. The pre-credits sequence, in particular, hurls so many apparently unconnected characters and scenes at you, it seems impossible that they'll all tie up together. But miraculously, they do - and once the setup's in place, the rest of the film runs on high speed rails, a non-stop cavalcade of fights, chases, car smashes and gore. Miike, for once, paces it brilliantly - many of his latter day films have been irritatingly rambly and overlong, as if the rate at which he cranked them out left him no time to edit them properly. First Love, however, keeps its narrative focus all the way through to the end, which comes less than two hours after the start - another change from most recent Miike productions.

It's also worth noting that the performances in this film are great: every one of those characters gets something memorable to do, not just the couple at the centre. So it's possible that on balance, restricting himself to just one film a year may be the best move Miike has ever made, based on the evidence of this particular film. As the LFF's own Kate Taylor said at the start, on this screen, with this sound system, it’s a perfect Friday night out: after all, we don't call it the Big Fuckoff Odeon for nothing. (She didn't say that last bit.)