Reviewed today: Circus Of Books, The Street, To Live To Sing. 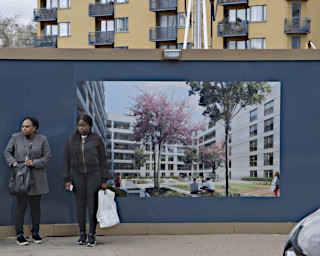 I've already noted one of the big changes at this year's LFF - there are no screenings at Cineworld and Picturehouse cinemas any more, possibly because of their reluctance to pay the London living wage, possibly not. But there's another cinema that's dropped off the list this year, and that's the Rich Mix in Shoreditch. That's a bit more disappointing, because I like Rich Mix a lot: they're well-maintained screens inside a buzzy and atmospheric arts hub. Besides, it would have amused me enormously if they'd used the venue to screen this film about gentrification in east London.

There's a stereotypical idea of what modern gentrification looks like: old businesses in an area shut down, young people with twatty haircuts use the spaces to open cafes that only serve buttered Weetabix, everyone gets angry. Zed Nelson's film tries to provide a more rounded look at the subject, by focussing on a single street over a period of four years. Hoxton Street is a community housing people from multiple generations, with the City of London visibly looming at one end of it. Nelson takes a pointillistic approach, building a portrait of the street from multiple interviews over the years, providing the equivalent of a time-lapse view.

A local garage owner nails it in a single quote: change is how progress happens, and it’s good, but the problems start when change happens far too fast. Nelson may be a little weak on joining the dots together, but he's careful to make sure all the dots are in his film. The initial flood of people leaving the area, inspired by Thatcher's introduction of the right-to-buy policy for council houses. The artists moving into the cheap properties left behind, followed by the more esoteric businesses. (An early highlight of the film is a shot of the owner of a pie and mash shop staring out of his window, looking at a craft beer emporium over the road like it’s just dropped in from Mars.) Rents go up, more of the original inhabitants are priced out of the area, more rich newcomers move in. It's a vicious circle that escalates until virtually everything's been replaced by corporate offices, or flats that are being used for investment rather than habitation.

You could argue, as The BBG does, that Nelson is a bit too keen to set this up as a war between the residents on the street - from the wearyingly racist old people, to the terrifyingly pretentious newcomers (there’s at least one artist appearing in this film who is so straight out of Nathan Barley that he has to be a fake). It frames the issue as a conflict between the classes, possibly pushed more in that direction by the use of the score from Mike Leigh's Life Is Sweet. For me, it feels more like Nelson is acknowledging that this conflict exists, but showing how it's being used to distract attention away from the real villains of the piece, the ones who are ultimately responsible for apartment prices in Hoxton being out of the reach of literally anyone I know personally. As we walk down Tottenham Court Road after the screening arguing the points, we pass at least four other sets of people having similar discussions about the film: if Nelson's aim is to start a debate, he's made a damn good job of it. 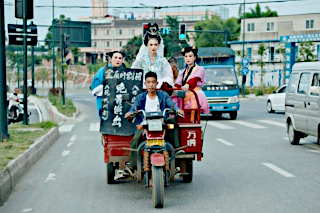 My festival's been a little light on films from China so far - live action ones, anyway - so here's the second feature by Chinese writer/director Johnny Ma. It's funny how you can read that name several times in programme notes and synopses, but it's not until you hear someone say it out loud at the start of a screening that it gives you pause for thought. "Does Morrissey know he's foreign now?", that sort of thing.

Through a total fluke, this turns out to be our second film in a row on the subject of gentrification and development driving out local businesses. In this case, the business is a Sichuan opera troupe, performing the old operas to an audience that’s slowly dying off one by one. Its owner Xhao Li (Zhao Xiaoli) is desperately trying to keep the performers together, and not give into the pressure to make their shows more interesting to younger people. The troupe starts rebelling against her, especially her niece Dan Dan (Gan Guidan), the youngest performer in the group. Meanwhile, it's getting harder to ignore the bulldozers pulling down the buildings next door to her theatre.

Until Xiao Li gets the demolition order for her theatre in her hand, To Live To Sing doesn't really have a plot at all, working more as a character study of a group of people finding themselves being overtaken by progress. Even after that much-needed ticking clock is set off, the film rambles a lot and struggles to keep your attention. It’s at its best during the opera performances themselves - a clever combination of the low-budget reality of local theatre, and the glossier fantasy version that Xiao Li carries in her head. More of that, and less of the backstage squabbling, and this might have worked better for me. 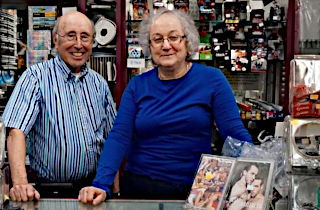 Fifteen years ago, on the day John Peel died, I reviewed Jonathan Caouette's autobiographical documentary Tarnation. I finished my review with the prediction "some day, it's possible all films might look like this" - a new generation of filmmakers was coming through that would have had video cameras in their hands since birth, meaning they'd have a huge visual archive to draw on in order to tell their personal stories. It's taken a bit of time, but it's starting to happen.

That’s your hook right there, obviously. What makes this such a satisfying watch are the layers that aren't immediately obvious from the one-line pitch. How the Masons drifted into the business of grumblemag distribution under the auspices of Larry Flint. How that business expanded when the local gay bookstore couldn't pay its bills and needed new owners. How that bookstore became a meeting place (with all that entails) for LA's gay community. How they diversified from there into video distribution. And most extraordinary of all, how the Masons managed to compartmentalise their work and home lives to keep the business a secret from their kids, and the way that compartmentalisation eventually collapsed.

For all the lurid subject matter, this is an utterly charming documentary, because Rachel Mason knows full well that her parents are utterly charming people. Keeping a hands-off approach to the material they sell, but retaining a close professional fondness for all the people they encounter, they’re a joy to spend time with. You’d think that the only card this film has to play is 'nice old people are unflummoxed by naked horny men', and you’re probably right, but somehow it still surprises you every time that card's played. Rachel assembles her footage with all the affection it deserves, even when her mother keeps telling her on camera that this will be an underground movie with very little appeal to the general public. Um, does she know it’s going to be on Netflix?