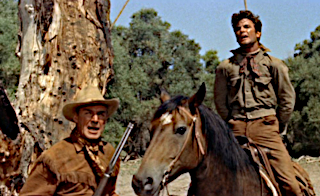 GROVER CRISP KLAXON. The man in charge of Sony Columbia's restoration department has been introducing archive films at the LFF for about 20 years. Hey, he's been coming nearly as long as me! At the turn of the century, Crisp turned up here once a year to present an ongoing series of restorations of the Westerns directed by Budd Boetticher and starring Randolph Scott. I saw and reviewed Decision At Sundown in 2003: I missed out on Ride Lonesome when it was shown here in 2001, but Crisp admits now that the restoration was below par, using a chemical process that wasn't quite up to the job of bringing back the film's faded colour. Eighteen years later, he's bringing it back after a digital cleanup that's been much more successful.

Ride Lonesome is, by all accounts, one of the best of the half dozen Boetticher/Scott collaborations. It grabs you from the word go with a beautiful shot of Scott's character, Ben Brigade, riding through a rocky landscape on the way to apprehending bad guy Billy John (James Best). Brigade's plan is to take Billy to Santa Cruz for a bounty and a hangin’. But they pick up three other passengers along the way - a station master's wife, and two crooks who see Billy's capture as a way of getting amnesty for their crimes, if they can just get Brigade out of the way. Lurking in the background is another problem: Billy's brother, who's so big a problem that they had to get Lee Van Cleef to play him.

Part of the fun here is seeing what a couple of future stars looked like back in 1959: not just Van Cleef, but also a surprisingly scrawny James Coburn as one of the outlaws. But the main thing that impresses you about this film sixty years later is its darkness, in every sense of the word. The nighttime scenes are beautifully layered - moonlit sand, silhouetted foliage and exquisitely lit people in the foreground. These are precisely the sort of shots you can imagine being wrecked by a bad restoration, and they look lovely here. But it's also dark in narrative terms: Brigade just looks like a rum 'un from the moment we first see him, and every character’s morals turn out to be dubious or flexible as the situation demands. Historically, you don't expect westerns to show this degree of ambiguity until the mid-sixties, but this feels like a point where the dividing line between goodies and baddies begins to get interestingly blurred.

Ride Lonesome is a perfect bit of entertainment for a Sunday afternoon: it rattles through its plot in a speedy hour and a quarter, culminates in a satisfying image that ties everything up, and then stops. You can tell several members of the audience are here out of pure nostalgia: for us, the nostalgia doesn't really kick in until several minutes after the screening, as we spot Grover Crisp and Clyde Jeavons having lunch together in the BFI restaurant. It's lovely to see the old team back together again. 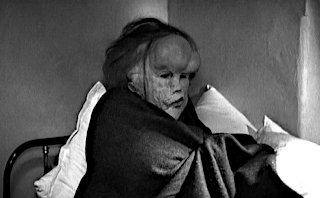 TOBY JONES KLAXON. If I'd made it into the NFT2 gents just thirty seconds earlier, I would have been having a wee next to him. As it goes, sitting in the row behind him at our second archive presentation of the day is an acceptable alternative. He's here representing his dad, the late Freddie Jones. Meanwhile, two of the living cast members of The Elephant Man give us a few words beforehand. Helen Ryan (who played the Princess of Wales) tells a silly story about trying to explain the Milk Tray adverts to director David Lynch: while Hannah Gordon, who has mysteriously become a little old lady in the forty years since this film was made, is a little wobbly to begin with but perks up delightfully after thirty seconds in front of an audience.

So, once again, The BBG and I have to come to terms with the idea of the restoration of a film that was originally released in our lifetimes. We're going to be seeing a lot more of this in the future, aren't we? To be fair, though, this 4K restoration (supervised by Lynch himself) polishes up Freddie Francis' photography so that it's never looked better. And just as importantly, it’s never sounded better either. One of the interviewees on the documentary Making Waves cited The Elephant Man as the film that showed her what sound design was capable of, and you can see - well, hear - her point. The industrial soundscapes that roared through Lynch's earlier Eraserhead now have a visual context to them: he's obviously fascinated by the heavy machinery of the industrial revolution, and the sounds of clanging metal and hissing steam become a constant undercurrent on the soundtrack, building to gut-shaking intensity whenever the film ventures outdoors.

It seems too obvious to point out the magnificence of John Hurt's performance as John Merrick, the hideously deformed man given a new lease of life by Dr Frederick Treves (Anthony Hopkins). It's possible, though, that in recent years you may only have experienced it in isolated clips of individual scenes. It's only when you see the whole film from beginning to end that you realise how extraordinary it is: Merrick's gradual transformation from circus freak to society darling is perfectly calibrated. Everyone else in the cast from Hopkins down is great, particularly villains Freddie Jones and Michael Elphick: playing their roles without tipping the film into cheap melodrama, which would have been so easy to do.

It's been a long time since I last saw The Elephant Man, and I've seen a lot more David Lynch since then. It's possibly the straightest story he's ever told (even including the most obvious candidate for that accolade). There are distinctive Lynch touches for sure - the impressionistic opening and closing scenes, and that soundtrack - but unlike virtually everything else he's done, there's never a sense of him being ironic or faking naivety. He means this, and it feels all the more special for that. 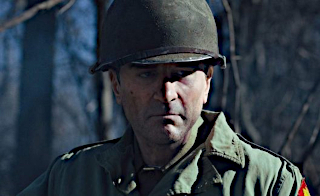 AL PACINO KLAX - no, that's not going to happen, sorry. As has become the norm in recent years, tonight's Closing Gala has been split across two locations: the Odeon Leicester Square for the film industry crowd, and the Embankment Garden Cinema for those BFI members who were lucky enough to win in the raffle. We’re neither: but outside of those locations, the Gala is also being screened simultaneously in multiple cinemas around the UK, and those don't require connections or luck to get into. It takes a bit of effort, but we manage to dash from BFI Southbank to Curzon Bloomsbury in under half an hour, and get there just after the start of tonight's supporting programme: a twenty minute collection of interview clips beamed from the red carpet outside the Odeon.

So we're not there to see any of the big names personally: but it turns out that in thirty years of going to see LFF screenings, I've already been in the same room with most of the people Edith Bowman is talking to on screen. There's Martin Scorsese, who was last at the LFF in 1995 with Casino, not in 1980 with Raging Bull like he says in his interview. There's Harvey Keitel, who was here in 1992 with Reservoir Dogs, giving moral support to the mouthy kid with him who turned out to be its director. There's Robert De Niro, who brought his own directorial debut A Bronx Tale here in 1993. And there's Al Pacino... no, I've never been in the same room as him. However, the surprise film at my first LFF in 1989 was Sea Of Love, which starred Pacino. At the last gasp, the cliffhanger's resolved, and I’ve finally found someone who links the 1989 and 2019 festivals. Thanks for playing, everyone!

Which just leaves us with the matter of the Closing Gala film itself. And it’s fascinating to see that Scorsese is trying anything he can at this late stage in his career. At first glance, The Irishman seems like well-worn territory for the director - the true story of gangster Frank Sheeran (De Niro), and his changing relationships over several decades with mob boss Russell Bufalino (Joe Pesci) and union leader Jimmy Hoffa (Pacino).

But there are two new things he’s trying out here. First, can he make a film that’s specifically designed to be viewed on Netflix? Everyone’s talking about The Irishman’s three and a half hour runtime, but that’s no longer than all eight episodes of Russian Doll run together. This film's effectively structured as a self-paced binge watch - built around a set of flashbacks embedded into a road trip, you can take a break at various points throughout the story, or watch the whole thing in one go, like we’re forced to in a theatrical setting. In terms of pacing, the first three hours or so fly by, but they're then followed by a deliberate dying fall: it’s a feature rather than a bug, but an awkward one to deal with so late in such a long film.

Scorsese’s other experiment is this. The kids these days have superhero epics that span generations, and use digital technology to make actors look much younger in flashbacks. Could you do that in a serious drama, having your main characters age convincingly over a forty-year timeframe? I had my doubts (and suspected this may be part of the reason why it’s effectively been made for television), but on a cinema screen it looks subtly done and works just fine. The one bit that fails is the earliest flashback in the film, a war sequence in which De Niro's face has so much digital Botox fired into it that he literally looks like an Action Man. God knows why Scorsese put the film's worst effect in its trailer, unless it was a sneaky way of lowering expectations, in which case well played, sir.

Experiments aside, The Irishman’s a great piece of entertainment, balancing its sudden moments of violence with some comically evasive dialogue - frequently scenes go round in circles, as everyone keeps on using euphemisms, rather that simply demanding someone be killed. (Pacino's scenes with Stephen Graham as Tony Provenzano are a brilliant example of this.) It's not got the full-throttle brilliance of a Goodfellas, but it's trying to do different things: it's an old man's story, told by old men, which kind of justifies it narratively giving up the ghost in its final couple of reels. Watching it on Netflix may be the best way of coping with its epic scale, but don’t expect to get free bottled water and sweeties like the Curzon gave us tonight. Ah, I remember when all the big LFF films used to have freebies with them...

Well, enough of the nostalgia, that's my thirty-first London Film Festival done and dusted. All that remains now is the Wrap Party, so come back at some unspecified point in the future when we can weigh up what's been going on for the last twelve days.