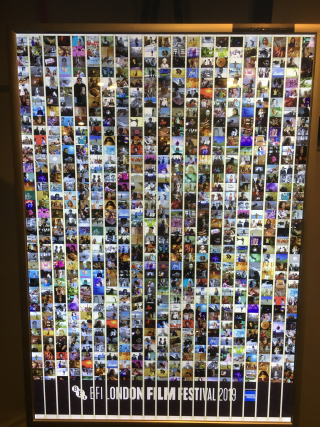 No love at the London Film Festival 2019 for me, I'm afraid. Have a look if you don't believe me:

Of course, The Belated Birthday Girl keeps hoping that Tricia Tuttle will eventually ditch her predecessor's category system for something less chundery, but for now it's all we've got. It's always an interesting way to break down what I've seen, anyway.

As usual, we're here far too long after the fact to talk a bit about what was good and bad at the LFF this year. So first off, here's The BBG to reveal her thoughts. 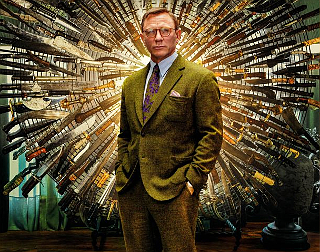 Bubbling under: Circus of Books, Shooting the Mafia, Workforce, The Cave, Recorder: the Marion Stokes Project

A new category for my wrap is films that were nearly great, but for just one thing.

Worst of the Fest: Waiting for the Barbarians
Disappointing: Guest of Honour

Archive Special Mentions: The Finishing School, The Masque of the Red Death, The Elephant Man

So another good LFF, although we spent most of the festival waiting for something to leap out as being a great film we’d want to tell everyone they should see. But that finally came on Day 8 with Knives Out. We’d enjoyed the Rian Johnson screen talk very much, and I’d left that hoping he’d managed all he’d set out to do with the film, and indeed he had. This was one which had leapt out to me from the LFF preview we went to, and it delivered. It’s in UK cinemas very soon: we’ll be seeing it again, it’s that good that it deserves a second viewing that soon. Monos was also very good, and as it’s in cinemas already as I write, I’d definitely recommend it.

Only one film I wanted to call out as bad, which was Waiting for the Barbarians, and that was all the more disappointing for me when thinking about how much I’d enjoyed the previous film we saw by the director. Guest of Honour was mainly disappointing because it didn’t leave enough hanging in viewers’ minds, with the plot taking a few very silly and unnecessary turns to get to the unsatisfying outcome. I’d almost put Family Romance LLC in the “disappointing” category, as I’d expected more from Werner than another “look-at-the-funny-Japanese” film, and I do think a straight-up documentary, not shoe-horning things like the robot hotel in, would have worked better.

Apart from the films on my Top 5 and bubbling under lists – any of which really could have made the Top 5 – I’d also like a shout-out for The Lost Okoroshi. The low production values have probably kept it out of those lists, but it definitely had a lot going for it, in terms of wit and intelligence, and it was a pleasure to watch.

So a good first year officially in charge for Tricia Tuttle. Although I criticised Clare Stewart for coming in and stamping her mark on the festival in one go with those meaningless categories, I think we could do with Tricia now starting to put her mark on it a bit more. Maybe the pulling out of Picturehouse was part of that: I don’t know. Although the loss of anything outside the central London areas is a bit of a shame, and maybe we could get Rich Mix back in future years – although it did make it a bit easier for those of us who fit 3 or 4 events into a day for them all to be pretty close together. And I’d still like the animated shorts programs for adults back: watching I Lost My Body made me think that even more, even if it did mess up the ending a bit. But regardless, we’ll be back in 2020 for more: maybe we’ll get to more than one live event next year.

I'm writing this bit before looking at The BBG's own wrapup, to keep it as unaffected by her opinions as possible. Nevertheless, I know we both have the same favourite film this year, so you can have a look at the LFF 2019 trailer instead of another still from Knives Out. (For anyone out there who sat through the trailer as many times as we did and wondered about the song in the background, you can license it yourself from here.)

At the time, I said how disappointing it was that a big Hollywood flick was going to be my favourite one at this year's festival. On the other hand, it's made those Monday morning post-fest conversations at work a lot more straightforward: and as this is the first year I've had to do it at this particular workplace, maybe that's not such a bad thing. Ease them in gradually, I think. And there's a definite sense out there that Knives Out is going to be a biggie: just a couple of days ago, in the foyer of my local Vue, I watched a pair of young guys go apeshit over the trailer. "Wait, he's in it? And her? And them? What is this?"

What do the rest of my top five have in common? Nothing much, really, except that they all surprised me one way or another, and that's one of the reasons why I keep going to film festivals. I went into Jallikattu prepared to give its director Lijo Jose Pellissery one more chance after his disappointing debut, and it was a gamble that paid off spectacularly. Workforce was The BBG's choice rather than mine, so it amuses me that I seem to have rated it higher than she did. The Street had so many ways in which it could have botched its handling of its subject matter, but ended up being a thoughtful piece leaving plenty of room for discussion afterwards. And maybe my enjoying the new Takashi Miike may not seem like such a surprise, but I'm just glad to see that his reduced workrate appears to have tightened up the focus of First Love, compared with some of the more rambly tales he's told in recent years.

On the subject of surprises, if you'd told me at the start of this festival that Werner Herzog would have been responsible for my least favourite film, I'd have looked at you like you were Klaus Kinski. But Family Romance LLC, with its bewildering conceit of a potentially interesting subject made to play out Herzog's own stereotypical views of the Japanese, is well below his usual standard. A decade or two ago, I'd have been alarmed by the suggestion that Atom Egoyan could fall similarly from grace: hard to see Guest Of Honour as anything other than a weak parody of his former glories, though. As for White Snake, well, I only really went to see it because it was on at the IMAX, so it serves me right that all the increased screen size did was make me more annoyed with it.

So that's it for another year. Thanks to Tricia Tuttle and her excellent team for making my 31st LFF such a delight overall. Thanks to The BBG for ensuring that the first sentence on this page was a lie really, and to the various people we shared cinemas with along the way: Lesley, Stephen, Phil, Matthew, and nearly Seapea. And thanks to all of you for reading, particularly the ones who sent me supportive likes on Twitter during the festival. During the twelve days, I got likes from LFF staffers Tricia Tuttle (for this), Manish Agarwal (for this), and Kate Taylor (for this), which was nice. But I also got a couple of thumbs up from people involved in the making of the films: one from the official account for The Street, and one from the actual star of Family Romance LLC, who I suspect may not have read the review I linked to.

Do it all again next year? I don't see why not. Although it suddenly strikes me that as the curtain goes down on the last London Film Festival of the tenties, I'm now obliged to write volumes four and five in my series of LFF review books. Given how long it's taken just to get this single page together, I wouldn't hold my breath waiting for those. Being a monkey, and all.