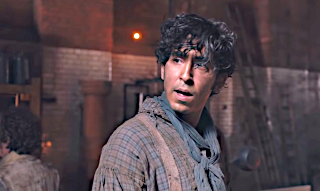 Once again, instead of going to the Opening Gala, we’re catching its overflow screening on the following afternoon at the Embankment Garden Cinema. And once again, none of the guests who were at the Gala can be bothered turning up the next day. They’re probably all still drunk from last night! It’s disgusting.

Anyway. It's usually the case that the Opening Gala has some sort of connection to London, and David Copperfield certainly has that: “There’s St. Paul’s,” says Mr Micawber (Peter Capaldi) helpfully, pointing as he runs away from another set of debtors. It's hardly worth summarising the story here, as we all know it: young David (Dev Patel) is born of a mother who’s fallen on hard times following the death of her husband. He spends his life oscillating between fortunes and classes: but whether he's working as a child slave for his wicked stepfather, or trying to fit in with the toffs at his school, he always maintains a writer's fascination with the people he meets along the way.

What should we expect from an Armando Iannucci film? Based on his past form in the cinema, you’d expect it to be funny, but deeply cynical with it. But some of his earlier TV work - I’m thinking of The Armando Iannucci Shows in particular - has had a sense of pure freewheeling joy in there too. He’s managed to recapture that in this adaptation, which twinkles with delight from start to finish. It feels like a very modern take on the story, despite all the period trappings on the surface: together with co-writer Simon Blackwell, he's made the odd tweak here and there to streamline the story. They don't sugarcoat the subtext of homelessness and poverty, but they do soften one or two of Dickens’ more melodramatic touches (Dora Spenlow’s revised fate, in particular, is a neat postmodern twist on the original).

Copperfield is Iannucci’s most cinematic film to date, as much of a leap forward from The Death Of Stalin as that film was from In The Loop. Which is odd, because there’s a lot in here that feels theatrical, from the casually colour-blind casting to the practical magic of the scene transitions. But all of these devices work in the service of capturing the huge scope of the novel, without descending into mere spectacle for its own sake. The cast is uniformly splendid, but it has to be said the women come off best: notably Tilda Swinton as Betsey Trotwood, Morfydd Clark as Dora, Rosalind Eleazar as Agnes and Nikki Amuka-Bird as Mrs Stanforth. There was a time not so long ago when all British cinema was costume drama set in the past, and it was dull as hell: Iannucci's Copperfield shows that with a bit of imagination, it doesn't have to be that way.

(Useful tip: if you're seeing a film at the Embankment Garden Cinema during this LFF, show your ticket on the same day at ramen joint Ippudo on Villiers Street and they'll give you ten per cent off the bill. Result happiness.) 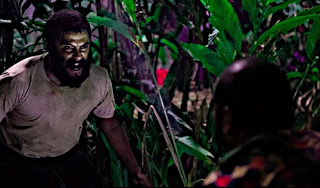 The LFF programme listing for this film opens with the phrase 'Kerala’s bad boy director Lijo Jose Pellissery'. I thought I recognised that name from somewhere, and I was right: back in 2015, while I was visiting Qatar, I caught his debut feature Double Barrel there. As you can see, I didn't enjoy it that much, but I was vaguely curious about whether he'd improved in the four years since. It turns out that he's developed a bit of a following in that time, at least if the audience of young Indian men at this screening is anything to go by: they're boisterous and vocal throughout, and give their first big cheer of the night at the logo card for Pellissery's production company.

Part of the appeal of Jallikattu is its simplicity. Following a careless slip by a village butcher, a buffalo is running wild and destroying everything in its path. The police are powerless, so it’s up to the villagers to sort it out themselves, with Antony (Antony Varghese) kind of acting as their leader. But they turn out to be just as incapable of solving the problem, and there's a growing demand for them to bring in former villager and legendary badass Kuttachan (Sabumon Abdusamad) - much to the annoyance of Antony, who was responsible for running him out of town in the first place.

Sure, there are attempts at subplots involving the conflict between the police and the villagers, or an upcoming wedding. But there’s really just one story here - there’s a beast on the loose, it has to be stopped, and people are going to go nuts in the process. The film is reduced to a single ninety-minute chase setpiece, which turns out to be a better structure than Double Barrel's three short setpieces and lots of padding. Pellissery rises to the challenge, starting off in-your-face - the sound of a loudly ticking clock circles around the audience, with a cut to a new extreme closeup at every tick - and then gets even in-your-facer after that, alternating rapidly edited sequences with long complex steadicam shots.

It’s neatly structured as a three act chase, with the second act only feeling like a lull in retrospect because the third goes so utterly flat-out insane. But Pellissery paces it all terrifically, with the crazed finale feeling earned after the gradual buildup. It's worth noting that this LFF screening comes with a warning poster about scenes of animal abuse, and you do find yourself wondering if the warning's there because someone thinks we can't trust Indian cinema to fake those scenes properly, or whether you'd have to put a similar warning these days on something like Jaws. Or you could put all that to one side and just strap in for the ride, realising that it's a story as much about human abuse as anything else. 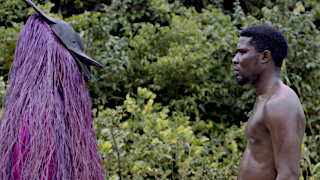 I don’t have much experience of African cinema in general, apart from the odd thing at this festival, or those action movie trailers that everyone was giggling at online a few years ago. And it’s worse when you get onto Nigeria specifically: Nollywood is one of the biggest film markets in the world, but apart from the odd time I've stumbled across the Nollywood channels on my telly, that’s about it. Anyway, a couple of weeks ago we went to the LFF preview show, made up of clips of a few dozen of the films to come. You know how I said in the intro that I was seeing a couple of movies here purely on the basis of clips from that show? Well, The Lost Okoroshi is one of them.

It starts off looking deceptively like the sort of thing I’ve seen during those channel hopping sessions - flatly shot scenes of the lead character Raymond (Seun Ajayi) bickering with his wife at home, or bantering with his mate in his Lagos security guard job. It’s all perfectly normal, except for the dream he keeps having where he’s being chased by masquerades - bizarrely costumed dancing monsters, led by the giant purple Okoroshi. He tells his village chief, who suggests that these monsters represent his ancestors, and that instead of trying to escape them in his dream he should embrace them. So he does. And the next morning, Raymond’s wife wakes up to find an Okoroshi in her bed where her husband used to be.

It's a slightly rough-looking film, there's no doubt about that. Part of it's deliberate: director Abba Makama has shot in a boxy 4:3 aspect ratio to recreate the look of the VCDs that Nollywood cinema emerged from. But part of it is just down to limited resources, notably the grungey sound editing and cheap-looking sets. But if you look past the surface scruffiness, there's interesting stuff going on here, with imaginative use of colour grading and editing giving the film a dreamlike quality. The dialogue is in a dialect-heavy form of English - you only really need around 50% of the subtitles, but it'll be a different 50% for every viewer - and justifies its place in the Laugh section of the programme with several decent jokes. Underneath the laughs, though, is a sombre subtext about what’s been lost in Nigerian culture in the rush to embrace what the western world has to offer.

The Lost Okoroshi presents the history and myths of the Igbo people, and balances them against the way modern Nigerians live today. The result is both a snapshot of a way of life many of us have never seen before, and a calling card for a much-maligned national cinema's next generation of filmmakers. Both of those are causes for celebration.

The Belated Birthday Girl - It is 1975, the year after Portugal’s Carnation Revolution replaced more than 40 years of authoritarian dictatorship in a military coup that became a popular revolution. In the south of the country, co-operatives are being established to turn seized farmland into clinics and schools. Young Portuguese returning to the country, having fled conscription into the Colonial war, along with idealistic foreign youth, respond to the call to help out at the Southern co-ops. A Pleasure, Comrades! recreates these events on one such co-op, using a mixture of actors and people who took part at the time.

The device of recreation, rather than talking-head recollection or narration, is not one I think I have seen used for a documentary film before, but it makes for a very effective and hugely entertaining exploration of a period of history so recent and yet so unknown to, or rather forgotten by, many of us outside Portugal. Watching the actions and debates of their younger selves carried out by the participants now in their 60s is both moving and illuminating. The innocence and naivety, and passion and hopefulness, of the young people is made so much more immediate by the manner of re-telling, and all the frustrations and desires, both social and sexual, are brought to life, with warmth and humour. The cultural clashes between the local southern Portuguese and the foreign young men and - particularly - women at the co-op, give rise to some of the film’s funnier moments, and also to some of its more revealing ones. The film explores attitudes to women’s position in society and especially to sexuality through the experiences of the women on the co-op, with an immediacy and directness. But it also reminds us of how short a time ago Europe had dictatorships and revolutions, and how precious and precarious is our current situation.

At a very interesting and entertaining Q&A after the screening, the film’s director José Filipe Costa went into more detail about the process of workshopping the script with the participants, building from ideas that he wanted to explore but firmly grounding it in the experiences and memories of the people who lived it. “Show, don’t tell” is often used as a guide for writers of narrative fiction. A Pleasure, Comrades! applies it to documentary, and the result is an original and highly recommended film.