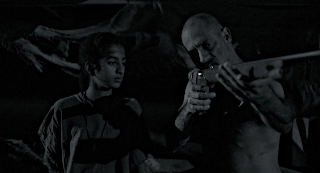 It’s only a two film day for me today, so we've got room to digress a little. By the time this page goes up, both screenings of the Surprise Film will have taken place, so it’s now safe to say out loud that it was Uncut Gems. We didn’t attend it this year, partly because of the usual not-being-able-to-get-tickets reason, partly because of our disappointment at last year’s choice. Purely on the basis of the trailer, I think I might find it hard to get past the whole Adam Sandler thing, but the reports out of the screening have been overwhelmingly positive. I always think you can tell a lot about a festival director from the way they introduce a Surprise Film, and the quote that everyone’s sharing from Tricia Tuttle’s intro this year - “Hands up if you like musicals? Hands up if you like cats?” - suggests we’re currently in very good hands. We’ll try harder to get into next year’s Surprise, I think.

Anyway, onto today's programme. To pick on the hints from my own introduction eight days ago - God, was it only eight days ago? - Scales is one of a pair of films where my decision to see them was purely based on a clip showed at the LFF preview night back in August, the other one being The Lost Okoroshi. In both cases, it was the very distinctive look of the clips that drew me in. With Okoroshi, it was the way it looked like a cheap straight-to-video production, 4:3 aspect ratio and all, but with a unexpected imagination and approach to colour in the images themselves. Scales was, perhaps, the more traditionally interesting of the two, with its island settings shot in beautifully high-contrast black and white (although it was a surprise to learn that they didn't decide to go monochrome until partway through post-production).

The photography was the hook that drew me in: and then I discovered that for the second time this week I'd be watching a film by a female director from Saudi Arabia. Like The Perfect Candidate, it's inevitably about the role of women in Arabic society: though this one is, to say the least, a lot more allegorical in nature. On an island where only humans live, there are two long-standing traditions. One is that each family has to sacrifice a girl child to the sea maidens: the other is that the men have to go to sea on a regular basis to catch the only source of food open to them. Young Hayat (Basima Hajjar) is a living transgression of both of these traditions. Her father refused to drown her as a baby, making both him and her outcasts. When she’s eventually chucked into the sea at the age of twelve, she comes back with a catch that effectively qualifies her to go out on fishing expeditions with the men, whether they like it or not. And they don’t.

It's obvious that under the fantasy surface, there are things being said here about the way Saudi women are treated, although writer/director Shahad Ameen has to admit that the situation has moved forward a lot just in the time it's taken her to make this feature debut. For a western male viewer (that's me), it all dangles tantalisingly out of reach: you feel there’s a tale being told here of a culture you can’t quite grasp, made all the more complex by being represented in a set of symbols you’re even less familiar with. It doesn't help that the story is completely pared to the bone (it's all over in 75 minutes): Ameen has said that she was keen to take out any exposition that was too obvious, but it does make what's left a bit impenetrable to those of us outside of her cultural frame of reference.

Nevertheless, it's impossible to take your eyes off the screen, for two reasons. The first is Basima Hajjar's performance: her sheer determination in the face of, let's be honest, a huge bunch of terrible men is the narrative thread that keeps you connected even as the rest of the story moves into its own private mythology. The second is João Ribeiro's cinematography, all the more astonishing for not being originally planned as black and white - you're vaguely curious about what his images would look like in colour, but the extraordinary use of contrast gives a grounding to Ameen's occasional flights of fancy. I didn't find Scales an entirely satisfactory experience while I was watching it, but it's grown in the memory since, and that's generally a good sign. 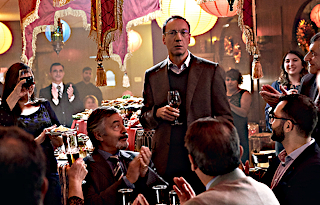 Ooh, so close. You'll also remember from my introduction (eight days, bloody hell, it feels like eight weeks) that I was trying to work out if there was anyone I saw at my first LFF in 1989 who would still be there this year. And it strikes me partway through this film that its director Atom Egoyan could have been there. I mean, I know that the first Egoyan I saw personally was Exotica back in 1994, after which I went back and tracked down his earlier work on video. One of those early films, Speaking Parts, was released in 1989 - did that make it to the LFF that year? I've just had a quick look through my old programmes, and no, it didn't. False alarm, move along, as you were.

Egoyan was a darling of the arthouse scene back in the nineties, but has drifted out of favour since then. The last time I saw one of his movies was Chloe at LFF 2009, a remake of a French film that felt a bit more conventional than the multi-layered narrative we'd normally expect from him. On the surface, Guest Of Honour feels more like a return to his usual subject matter, focussing as it does on a character with a slightly unusual job requiring an obsessive attention to detail. In the past we've had an insurance loss adjuster and a film censor, now we've got a food health inspector to add to the list.

In a clumsy framing device, Veronica (Laysla De Oliveira) visits Father Luke Wilson to arrange a funeral service for her dad Jim (David Thewlis). Jim wasn’t a regular churchgoer, so Veronica has to tell the priest his life story: a former restaurant owner from England (cue unexpected Billy Bragg needle drop) who never really seemed to be happy in his later career as a health inspector. Because this is Atom Egoyan, most of that unhappiness is inevitably tied up with secrets in Jim's past, and a few of those secrets - unknown to him - are tied up with Veronica.

The way I used to remember Egoyan films working is this: we’d get a series of interwoven stories about people broken in apparently unconnected ways, who would gradually mesh with each other. What we get here is like a TV movie version of the same approach - we flip between the stories of Jim and Veronica, and they don’t so much mesh as collide into each other in increasingly contrived and irritating ways. While things remain a mystery in the first half, it’s interesting: but as time goes on, the characters have to behave more and more ridiculously to keep the suspense going, making them feel less like people and more like plot generating algorithms.

Guest Of Honour isn't entirely irredeemable, and most of that's down to the excellent performance by David Thewlis in the lead role, playing Jim with just the right combination of officiousness and vulnerability. But even an actor as fine as Thewlis can't pull off the overlong, overexplanatory scenes at the climax that come perilously close to undoing all his good work. You could say the same about Egoyan, who's made a film here that's so disappointing that it makes me start to doubt how good his earlier films really were.

The Belated Birthday Girl - The film opens as a man arrives at the island of La Gomera, in the Canary Islands. He is met on arrival and told to turn off his mobile phone, as police may be listening. He is then taken to meet a beautiful woman, Gilda, who tells him to forget about what happened in Bucharest, as that was just for the surveillance cameras. We then flash back to a rainy Bucharest, to see that previous encounter unfold. The man is Cristi, a corrupt cop working with the crime gang of which Gilda is a part. The Whistlers of the title are a reference to how the gang communicate using the silbo whistling language of La Gomera, perfect for a setting where everyone seems to be spied or listened in on, even the police themselves, and where corruption is rife and police are happy to plant evidence to get their arrests.

The Whistlers is a film with plenty of visual flair, colour-coding characters who each have their own chapters, moving back and forth in time and switching between the island and Bucharest, and with a plot full of double-crosses and betrayals. It’s also a very entertaining film, far more of a commercial crime caper than the sort of serious art-house movie usually associated with Romania, although the prevalence of surveillance and police misconduct of one sort or another could be seen as giving it something of a political edge. But really it’s just a modern day pulp fiction (with a small “p” and “f”) in a less familiar setting.