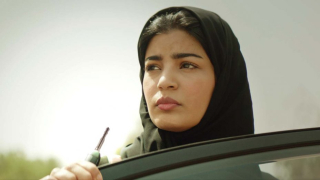 Here's a useful indicator of how quickly things change in the world (albeit after staying the same for a ridiculous amount of time). Back in 2012, The Belated Birthday Girl filed a report from a screening of Wadjda, the first Saudi Arabian film by a female director, Haifaa Al Mansour. She was touched by its story of a young Saudi girl trying to obtain a bicycle, and encountering predictable resistance. Seven years later, Al Mansour is back at the LFF, and her new film opens with a Saudi woman driving a car. She's literally brandishing the key in the main publicity photo.

The woman in question is Doctor Maryam (Mila Alzahrani), who despite her undeniable expertise still gets grief from stubborn old men at her clinic, who refuse to let a female doctor touch them in case they get cooties. Maryam's clinic has bigger problems to deal with, though, most notably an entrance road that's almost constantly flooded. Frustrated with everything, she plans to travel to a medical conference in Dubai to interview for a better job: but a series of mishaps sends her down an entirely different career path, as she finds herself instead running for office in the local elections. Yeah, those old men worried about cooties are going to love that.

I never saw Wadjda myself, but I'm keen to watch it now if this is an example of what Al Mansour can do. Her film is delightfully humanistic, never painting the conflicts as Maryam against moustache-twirling bad guys: rather than set up obvious antagonists, we're kept aware that the villain is a frustrating system doing its job. As if to placate Saudi male viewers, there's a second story of rebellion running in parallel: Maryam's father (Khalid Abdulraheem) is a musician on a tour around the country, travelling through some regions where the act of playing music is as radical as the act of being a woman in politics. It's a reminder of how entrenched the Saudi mindset can be, and how far it's still got to go.

You do find yourself wondering, though, how much of this is for the benefit of international audiences. There's a lot of screentime dedicated to Arabic rituals and culture, from wedding parties to concert performances. It's all detail that would be utterly familiar to a home audience, which makes you wonder if it's aimed at them (and, given that Saudi Arabia has only just allowed cinemas to be built in the last year or two, whether a domestic audience would even be able see it in cinemas anyway). How much of this is an accurate depiction of current change, and how much is selling the promise of change to people outside the region? These questions don't stop The Perfect Candidate from being enjoyable to watch, but you end up asking them anyway. 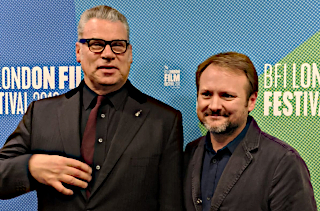 We've only got one live on-stage event in our schedule this year, but it's a good one - Rian Johnson, the director of the upcoming comic whodunnit Knives Out, interviewed by none other than Mark Kermode. It's a fast-paced session, possibly because the festival has carelessly scheduled another live interview (with Atom Egoyan) in the same room just 100 minutes later - by the end, Kermode is setting 30 second deadlines on both audience questions and Johnson's answers. He keeps things moving fluidly, but it strikes me after the event that he doesn't really delve into Johnson's background: to listen to their conversation, you'd imagine that the first thing the director ever did in his life was make Brick in 2005.

"Pitch me Knives Out!" is Kermode's opening gambit, and Johnson obliges: he's always been a big fan of Agatha Christie, and wanted to recreate the feel of the 1970s films that starred Peter Ustinov as Poirot alongside an all-star cast. Christie's characters were larger-than-life caricatures of personality types from her period: he wanted to create equivalent types for the 21st century, featuring huge but grounded performances. Don't worry, I'll report back soon on how successful he was with that.

The format of a Screen Talk is generally locked down - start by discussing the new film, then go back to the beginning of the subject's career and work through it chronologically. Kermode deviates from the format at this point, and instead steps back to the one Johnson made before Knives Out, because it's the ninth highest grossing film in the history of the world and probably needs to be talked about a bit. Johnson insists that the process of making The Last Jedi wasn't that different from the one he used for Knives Out - it all still comes down to shooting a scene, maybe "in bigger rooms and with better catering", but the actual work you do is the same. It led to some hair-raising conflicts with Star Wars fandom, and Kermode is impressed with how Johnson "engaged with people's engagement" over the film. Johnson's a big fan of Twitter ("I'm on it too much, but anyone who's on Twitter is on Twitter too much") and has a nice line about the "pattern of gamified outrage" it generates - it can be entertaining to become part of that, but it also gets boring after a while.

The rest of the talk returns to the standard format, looking at the three films Johnson made before Last Jedi: Brick (an attempt to recreate his experience of what it was like to read Dashiell Hammett for the first time, but in a contemporary setting), The Brothers Bloom (much maligned in many quarters, but he has fond memories of being given lots of money after his first hit and writing himself into lots of exotic locations) and Looper ("it's very hard to make an audience not stick with Bruce Willis: you could have him kill a child and they'll still find a way to justify liking him"). There's also a brief discussion of his work on a few episodes of Breaking Bad, given an added edge by Kermode's confession that he hasn't seen the final season yet and is desperate to avoid spoilers.

Johnson's an entertaining interview, and you suspect he runs a happy set. He sees his main job as a director is to be the audience: to react to what the actors do ("I'm constantly trying not to ruin takes by laughing"), and correct things if his reaction isn't good enough. He's generous with praise for his collaborators, and with his time for fans: after this talk, there's a queue of a hundred or so people in the BFI lobby, and he's cheerfully signing stuff for anyone who asks. Who knew there was so much Brothers Bloom memorabilia out there? 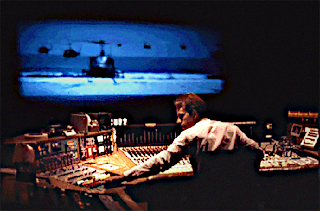 Was that really Daniel Kitson hovering around outside the Prince Charles before this started? I do hope so. Putting aside Mike Leigh because he's just so damn ubiquitous, it used to be the case that you'd see the odd celeb who'd turn up regularly in the audience at LFF screenings. For me, Neil Pearson and Michael Nyman are the two names that immediately spring to mind, but you never see them here at all nowadays. It'd be nice to have a new name on the list.

This film certainly feels nerdy enough to attract the attention of Kitson: a study of the history and practice of cinema sound design. Famously, we've had talking pictures since The Jazz Singer in 1927, but it's surprising to realise that cinema sound barely changed at all in the four decades after that - it all still came down to a collection of mixed sounds being pumped through a single speaker behind the screen. Midge Costin's documentary talks to lots of people working in sound (she was a sound editor herself on several Jerry Bruckheimer blockbusters), and focusses on three pioneers in particular. Walter Murch, whose work on Apocalypse Now led to the surround sound format still in use today: Ben Burtt, providing the Star Wars films with a believable audio world: and Gary Rydstrom, innovating digital sound alongside Pixar’s digital images.

Alongside the history, the film also goes into the nuts and bolts of how sound works on a modern picture. Costin and her screenwriter Bobette Buster use the neat visual image of a 'circle of talent': arranging the different components of a soundtrack in an arc similar to the physical arrangement of an orchestra, and examining each one in turn. We see how production recording, ADR, effects and music all play different roles in enhancing what we see on screen, and how it's the sound mixer's responsibility to balance the proportions of each component.

The film uses hundreds of clips, all hopefully covered under Fair Use law, to provide great examples of the different techniques used through the whole history of cinema. It's therefore working on multiple levels - a showcase of great audio moments from the movies (this film really needs to be heard on a cinema sound system to make any sense), and an education into how they were created. If there's one flaw to be noted, it's that the film doesn't take its own advice about the dangers of putting in too much music: the syrupy score used here is dolloped all over virtually every moment where we're not trying to listen to a specific bit of sound mixing, and reduces it to the level of a cheap TV show. If you can get past that - and you should - then this is a terrifically informative film, which turns the spotlight on a group of people who would previously only be known about by the sort of movie nerds attending this screening. We know who we are. You too, Dan.