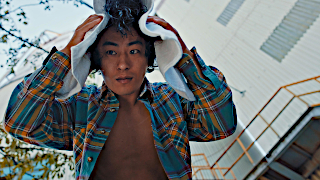 It's funny how, in recent years, so many of my London Film Festivals have started off at the ICA, as a cheaper and more interesting alternative to the glitz of the Opening Gala across town. This time last year, for example, I was seeing a quirky small-scale Asian movie here - Asako I & II - and this year's much the same, only this time it's from South Korea rather than Japan. It's not until Kate Taylor's intro that I learn about the background to this particular movie: it's a production of the National Human Rights Commission of Korea, who since 2003 have been commissioning films with a vague human rights theme. Up until now, they've been multi-director portmanteaux such as If You Were Me, If You Were Me 2 and whichever one the short Soju And Ice Cream was extracted from. (I've just checked, and it turns out it's from If You Were Me 9. Titles aren't their strong suit.)

Maggie is the first feature for both the NHRC and for director Yi Ok-Seop, although to be honest it's got such a fragmented plot it might as well be four or five shorts run together. Initially, it seems to be about the scandal that breaks out in a hospital when compromising photos are found inside the x-ray machine. Nurse Yoon Young (Lee Ju-yeong) has been using the x-ray room for out-of-hours hookups with her slacker boyfriend Sung-wan (Koo Kyo-hwan), so she decides to pre-empt the scandal by going to work with her resignation letter already written. But when she arrives at the hospital, she discovers that the situation is a lot more complicated than she thought.

This storyline quickly fizzles out, only to be replaced by several other similarly half-hearted ones, all playing in a highly whimsical register: for a while, the frequent chapter breaks and narrative digressions make it feel like a Korean version of Amelie, albeit one with more x-ray photos of erections in the first twenty minutes. It’s the resolution of the x-ray plot that gives you the first clue as to where the film’s ultimately heading, and why a human rights organisation is behind it: it turns out to be a parable about trust, and all the other subplots end up being variations on the same theme. Unfortunately, the enforced wackiness ends up undoing a lot of the film's good moral work, from the character of Maggie herself to the arbitrary bit of CGI nonsense the film has in lieu of an ending. It's not unwatchable, but it's frustrating seeing obvious talents being frittered away on a basic idea that has potential on paper. By the time The Belated Birthday Girl and I make it into Leicester Square, all the VIPs are securely locked inside the Odeon watching their Opening Gala, leaving just the usual wandering tourists and a lone woman performing a nightmarish John Lewis Christmas advert version of You’re The One That I Want. As for us, we're here to visit the Prince Charles and catch the return of director Alexandre O. Philippe. Two years ago he was here with his mesmeric documentary 78/52, a detailed analysis of the shower scene from Psycho. At the time, he mentioned that his next film was going to do something similar with the chestburster scene from Alien, and I said in my review "it looks like we may have a new candidate for 'the geekiest thing you could possibly imagine' showing at LFF 2019."

Well, I was wrong about that. Partly because Memory: The Origins Of Alien ended up focussing on more than just that one scene, and partly because it was released a month or two before the LFF and is already available for home viewing. Still, Philippe has come along to LFF 2019 anyway, bringing yet another one of his deep-dive film documentaries: this time, he's looking at The Exorcist, in a film that's largely based around a six day interview he shot with its director, William Friedkin.

Philippe's very keen to point out at the start is that this isn’t a making-of documentary. Plenty of those already exist, including the inevitable one hosted by Mark Kermode. This isn't going to be a look at how they made the pea soup come out like that: Philippe's more interested in Friedkin's process, and how he developed what turned out to be one of the all-time horror classics. The director goes into great detail about the choices he made and why he made them - the epic prologue in Iraq, the counter-intuitive casting, the arguments with writer William Peter Blatty, the even bigger arguments with his score composers. (One of the funniest sequences describes his falling out with some of the biggest names in film music, before he ended up cobbling together his own score out of classical recordings and bits of Tubular Bells.)

You sometimes hear the complaint that modern movie directors only really know other movies, and nothing about anything else. That's certainly not the case with Friedkin: his breadth of cultural experience is evident, and Philippe includes several illustrations of it. He’s rock solid on the films that influenced the look and the feel of The Exorcist, but also describes the many ways he was influenced by art and music. At the same time, he was working as a director in the seventies, and cheerfully admits that there were several occasions where he achieved his effects using methods you simply couldn't use now: shooting guns on the set to startle the actors, for example.

It's this contrast - a man who's intensely passionate about art and culture, but is also capable of literally punching a priest in the face to make him act better - which makes Friedkin a fascinating subject for a documentary. It also helps that he's one of those people who has anecdotes happen to him all the time, and is able to tell them beautifully. He does lose a bit of momentum towards the end as he starts drifting away from the filmmaking process into questions of interpretation, which are less interesting - though his thoughts on the ending are definitely surprising. But the film rallies for an unexpected coda that illustrates one of Friedkin's running themes: for all of the big set-pieces everyone remembers from The Exorcist, it's the tiny details that have the most emotional impact, the things that he calls 'grace notes'. The grace note Phillipe chooses to end the film on is a delightful example of this.

After Psycho, Alien and The Exorcist, Phillipe's next goal is to produce a regular TV show called The Process, which would perform a similarly forensic examination on a different film each episode. If he gets the money to do it, count me in.

In the old days one used to be able to click onto the next day's LFF reviews from the page you were originally reading without returning to the main menu. The fact that one can no longer do this has completely spoiled ones enjoyment of the whole thing.

This'll blow your mind: scroll down any amount from the top of any page, and watch out for the blue arrows that appear at the bottom left and bottom right corners...

Do you know, one thought they were something to do with Motorway driving, and best left alone. One now knows what one can do.