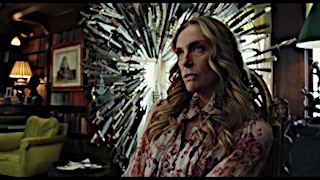 Just a couple of hours after yesterday's Screen Talk with director Rian Johnson, he was back in town introducing two separate gala performances of his new film. We're here for the overflow screening the morning after that, but he hasn't bothered showing up to that one. Probably still drunk from last night, disgusting, you know the drill. Mind you, given that it's an 11.30am start, I really can't blame him.

Mystery writer Harlan Thrombey (Christopher Plummer) is dead, and it's almost certainly suicide. People slit their own throats all the time, don't they? His family certainly agree - notably his daughter Jamie Lee Curtis, son Michael Shannon, daughter-in-law Toni Collette, and their miscellaneous spouses and children - although that may have something to do with how they all could profit from the old man's death. Still, the police think it's suicide too, and that should be the end of it. So why is gentleman sleuth Benoit Blanc (Daniel Craig) hanging around the house asking awkward questions?

Johnson's very much his own man as a director, but it's hard not to be reminded of the work of the Coen brothers when watching Knives Out: it's the combination of the dynamic camerawork (virtually every second shot feels like it's pushing in ominously on someone's face) and quirky characters. Daniel Craig's outrageous Southern accent makes you think about Blood Simple, and a one-scene cameo by M Emmet Walsh just emphasises the comparison. There's a big difference, though: at some point, no matter how much they admired the genre, the Coens would eventually find some way to take the piss out of it, and Johnson never does that. As he explained at yesterday’s interview, he didn’t want to send up the murder mystery, he just wanted to make a fun one.

And damn, this is good fun. Which is annoying. At some point next week I'll go back to work and people will ask me what was the best thing I saw at the LFF, and obviously what I'd want to recommend is a charming little allegorical fable from Kyrgyzstan that probably won't get UK distribution and it's a shame that they missed it. Whereas at the moment, the one I'm most likely to be recommending to them is a machine-tooled piece of Hollywood entertainment starring every famous person they could think of and made by the director of the ninth most popular film in the history of the world, and it'll be in their local Odeon from November 29th. But it's true.

Knives Out is a perfect example of the whodunnit genre which respects everything we love about it, while finding new ways to keep it fresh. It keeps the audience guessing from one minute to the next, but never resorts to narrative cheats: it's played at such blistering speed that even the hard-of-hearing subtitles at this screening don't distract you: and it keeps all the plates spinning right up to the quietly magnificent final shot. Not bad for an 11.30 start on a Wednesday morning. 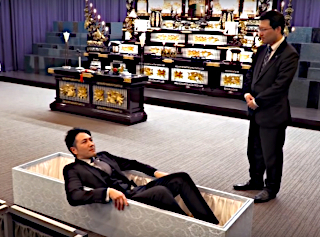 Werner Herzog turned 77 last month, but he still likes to keep busy. When we caught him speaking at Sheffield Doc/Fest a few months ago, he had three films concurrently on the go. One of them was the Bruce Chatwin documentary Nomad which he was presenting at the festival: it was on telly recently, and should still be on the iPlayer if you hurry. One was the self-explanatory interview piece Meeting Gorbachev, which is getting a preview later this month at BFI Southbank. And then he talked briefly about the one he'd recently been filming in Japan, giving some useful hints on how to film on railway station platforms without permission. The trick is, as soon as you see station staff coming towards you, everyone involved should immediately walk away in different directions. It's a lovely anecdote, but I don't recall Herzog saying much on what his film was actually about: and now I've seen Family Romance, LLC, I can understand why.

At the centre of the film is Yuichi Ishii, whose face looked disturbingly familiar to me until it suddenly clicked: if you shoved Werner Herzog himself through Martin Scorsese’s Irishman Machine, and turned the dial labelled 'Japanese' up a bit, he'd look like this. (It's something to do with the nose and chin, I think.) Ishii is the boss of a company called Family Romance, which hires out people who can act as substitute relatives and friends to anyone who doesn't have access to the real thing. Most of the time we see him with Mahiro, a teenage girl whose father walked out very early in her life: her mother has hired Ishii to present himself to Mahiro as her long-lost dad, though it's unclear whether Mahiro is in on the deception or not. We also see some of the other roles Ishii takes on in his job: taking the heat for a man's screw-up at work, or organising fake paparazzi to follow a vain girl around town. Very occasionally, he has a wee think about the negative aspects of what he’s doing.

Herzog has, in his time, made both fiction feature films and documentaries. I haven't told you yet which one this is, have I? Part of the problem here - or the point, perhaps - is that you're not given enough information on screen to work out what level of reality the film is operating on. It's filmed in a loose, rambly style that makes you assume we're watching actual events, or at least hearing spontaneous dialogue: but then at one point Ishii visits Tokyo's famous robot hotel and asks its manager if he believes robots will one day dream, and you suddenly think "yeah, Werner wrote this."

If you dig around, things become a little bit clearer. Ishii is a real person, and Family Romance is his real company. Herzog has taken Ishii and built a script around him, treating him as a character in a series of vignettes, without making it clear at any point how true this is to what Family Romance actually does. Once you realise this, Herzog's motives become a bit more suspect, as he's staging sequences that match his idea of what Japan is rather than observing what actually goes on. There's the thinnest of lines between what we see in this film, and the content of any oh-those-wacky-Japanese TV show. Any insights into the Japanese character are purely at surface level, and get disturbingly close to caricature: it wouldn't have surprised me if at one point Herzog had got Ishii to buy some schoolgirl pants from a vending machine. I’m kind of baffled by Family Romance, LLC, and still not sure if it's in a good way or not. 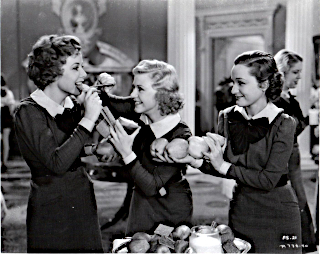 In the old days, Clyde Jeavons used to be the public face of the LFF's archive presentations. He was always happy to acknowledge that there was a full team of archivists working alongside him, but he was the one who did most of the on-stage introductions before the screenings. Over the years, you could work out the sort of films he enjoyed introducing the most: musicals, westerns, pre-Code. The Treasures section (as it's now called) got shunted into the sidelines a little after Jeavons retired from the role, but now it's returned to its prominent position in the programme, and it's time we found a new public face for it. I propose that Robin Baker, the head curator of the BFI National Archive, should introduce all the LFF Treasures from now on: he’s got huge enthusiasm for the films, and puts them into context beautifully.

Like Jeavons, Baker's a fan of the pre-Code era: those few years in the early 1930s when Hollywood films flirted with all manner of unsuitable subjects, before the Hays censorship code came in and spoiled everybody’s fun. Jeavons’ parting gift was a full season of this stuff at BFI Southbank which seemed to drain the supply for a couple of years, so finding a new restoration like this one is very welcome indeed. In a concise 75 minutes (slowed down by some slack sequences of real-time handwriting) we follow young society lass Virginia Radcliff (Frances Dee) as she's sent to a fancy girls' school to be taught how to behave like a proper lady. You know what's coming: in no time at all, Virginia and her best mate Pony (an early role for Ginger Rogers) are sneaking into the big city at the weekends to hang out with totally the wrong class of men.

For me, the class angle is the most surprising element of Wanda Tuchock and George Nichols Jr's film: one of the worst crimes Virginia commits is to meet a man who works part time in the service industry. It’s interesting to note that even before the Code, her worst crime couldn’t be spoken of out loud - though I’d imagine the way its aftermath is handled is precisely the sort of thing that would have been banned outright afterwards. As for everything else, it’s all as you’d expect, and good transgressive fun with it: all the best ways of behaving badly get screen time, from schoolgirl cat fights to women loudly announcing their plans to get drunk. There’s a plethora of hilariously cheeky lines, and everything’s wrapped up satisfactorily and shockingly by the end credits. Have a big old finale spoiler to wrap up your day (though they've cut an even better exchange of dialogue from the very end).