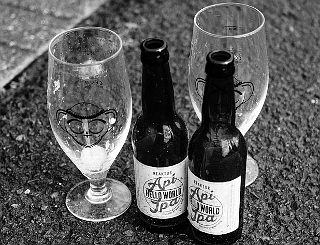 Comedy: Happy New Year, readers! Here comes the traditional hungover review of the New Year's Eve comedy show we watched last night. This time round, our options were limited: Ivor Dembina's Hampstead Comedy Club was taking one of its irregular years off, while Monkey Business was going for a more cabaret/burlesque approach which didn't quite fit our needs. So we chose for the first time to spend NYE with our chums at Good Ship Comedy, who've become our favourite London comedy club over the past few years. Ben Van Der Velde did his usual miraculous job as compere, spinning all manner of crazy nonsense out of his banter with the audience, and presiding over a bill that got better and better as the night went on. Josh Howie had some good lines that he was a little too keen to throw away casually: Jenny Collier had a nicely consistent set that built to a couple of great extended anecdotes: and Nathan Caton justified his headliner status by somehow being relaxed and hard-hitting at the same time. All this happened, as is usually the case with Good Ship nowadays, in the upstairs room of the Colonel Fawcett pub in Camden, where we got free entry to their end-of-the-decade party afterwards to see us through to midnight and beyond. Their intriguing promise to only play music from the Tenties broke down into a collection of old Motown and disco classics as we crossed into 2020: my attempt at a foolproof request to the DJ - "hi, I'm the oldest guy in the room right now, have you got any Janelle Monae?" - was met with blank incomprehension. Well, maybe next year.

Food & Drink: For those of you who like to keep tabs on it, The Bermondsey Beer Mile - the website co-run by The Belated Birthday Girl and myself, which documents London's most beard-and-vape-heavy bar crawl - continues to do a lot better than this one, even though it's updated even less frequently. We currently seem to be in some sort of two-updates-a-year groove, but hope to be more reactive to changes in the future. Anyway, we've just tweaked a few pages for the end of the year. A quick summary of news highlights for you - uBrew, the borrow-our-kit-to-make-your-homebrew outfit, has finally gone bust after several months of uncertainty: the cafe Secret Goldmine has just transitioned into a taproom for New Zealand brewery Yeastie Boys: and The Kernel is back in full force on the Mile with a new dedicated taproom of its own. As I said, we're hoping to update the site a bit more frequently in 2020, but just be warned that our plans for a dry and vegan January may initially have an impact on that.

Travel: At some point - maybe even this month, hopefully - I'll tell you all about what we did for Christmas. Suffice to say that we spent one night in Brussels immediately before it, and a full day and night in Brussels immediately after it. So: let's talk about Brussels. Inevitably, we spent some of our limited time there revisiting old haunts: a couple of visits to BrewDog Brussels (still surprisingly quiet), a night in Hotel The Moon (still cheap and cheerful, and their four euro breakfast is even more so), a stroll around the various delights of Christmas market extravaganza Winter Pret (though The BBG drew the line at this year's new attraction, The Kindness Machine - "by being scanned by a huge camera, the spectator will receive a personalized prediction of their altruistic acts"), a lunch at traditional favourite A La Mort Subite (so traditional I can't even qualify it with a parenthesised aside), and a visit to Bozar (the current Keith Haring exhibition predictably had gigantic ticket queues, but the free show of Yves Zurstrassen's work made up for that quite nicely). We also found two new beery places to add to our collection: The Hoppy Loft is a surprising craft beer outpost located above the Delirium Village complex of bars owned by the makers of Belgium's most famous loopy brew. while Nuetnigenough is a lovely restaurant with both an epic bottle list and a menu of dishes using beer. Culturally, our best discovery was the Fondation Jacques Brel, a multi-stranded archive of the great man's work: if you're limited on time, just go for the section Brel Chanteur, which lets you see three short documentaries and a concert film. Finally, our new favourite hotel within walking distance of BrewDog Brussels (sorry, The Moon) is 9 Hotel Central, which offers designer style at Premier Inn prices. Next time we visit the city, The BBG has asked me to remind her that she wants to check out the interesting-looking places on Rue de Flandre, which is why I'm mentioning it here.