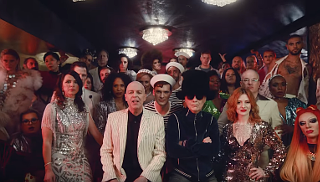 Art: I periodically maintain a small but perfectly formed list of the world's most outrageous disclaimers. To be fair, up until recently it only consisted of the opening caption of the 3D film Tron: Legacy, which waits until your ticket money's been successfully banked before telling you that only half of it's in 3D. But I can now add the publicity material for the exhibition Tutankhamun: Treasures Of The Golden Pharoah. Buried in the small print is a note explaining that the Pharoah's death mask - the image that comes into your head when you think of King Tut - isn't actually in the exhibition at all. The thing that looks like it on the posters is in fact a small replica used to hold some of his internal organs. Get past that disappointment, and this is actually a pretty great collection of beautifully detailed artefacts, making their way around the world one last time before they take up permanent residence back home in Egypt. Tutankhamun's visit to London in the 1970s was one of the first blockbuster gallery events, and the queues for this one initially appear just as hellish. But the material is ingeniously arranged around the Saatchi Gallery in a series of display cases with descriptive notes placed above them, allowing you to read the historical background as you shuffle towards the actual case itself. They say it's a 60-90 minute route around the gallery, but allow yourself two hours and you'll get to see everything without too much hassle. It's running in London till May 3rd, and then continuing its world tour from there.

Telly: I believe BBC Three is what the young people today have instead of actual television. (Or at least that's the BBC's plan, which may not quite live up to reality.) I'm here for Blindboy Undestroys The World, a series of four documentaries (plus a pilot made a year earlier) by Blindboy Boatclub of Rubberbandits and podcast fame. They're a fascinating collection of Blindboy's patented Hot Takes on the problems of modern life - the internet, modern slavery, work, anxiety - tricked out with undercover reporting, surreal pranks at the expense of wrongdoers, and a bastard of a talking fish called The Trout Of No Craic. It's a very similar mixture to the one Blindboy and his director/co-writer James Cotter were using on RTE a few years ago with their series of Rubberbandits Guides, reaching a peak with their show marking the centenary of 1916. My main concern here is that Cotter appears to have been forced to work to the BBC Three Yoof TV template: hyper-fast editing, gratuitous on-screen text, and a tendency to blow some of an episode's best surprises in an opening 'coming up...' montage. The result is a show designed to be split into bite-size shareable content, which I guess is what those young people want, but seems to be missing the point of making a half-hour show. Nevertheless, if you can get past the style, it's a good attempt at converting Blindboy's inquisitive podcast approach into a visual medium, although this apparently requires several minutes of legal disclaimers to be inserted after some of his strongest claims. We may not have realised that we needed a Dadaist John Oliver, but it's good to know that we have one now.

In the meantime, your Simian Substitute Site for February 2020 is Monkey Business, the new video from Pet Shop Boys, taken from their recently-released album Hotspot. I'm not going to lie to you, it's far from being one of the best tracks on the album, but you're getting it here because a) hey, it's the Pet Shop Boys! and b) hey, monkeys!

January's been a quiet month around here, I know: you may have picked up on the mention last month that we were just about to start a Dry Veganuary, and assumed that the lack of animal products and booze has made me too feeble to write anything. Not true, honestly: we've been busy. So busy, in fact, that our Dry January has somehow managed to take in one bar launch, one pub crawl and two beer festivals. (Don't worry, this doesn't mean that our Veganuary included a visit to a slaughterhouse.) Hopefully, you'll get to hear about all that here this month, as well as the delayed report on what we did at Christmas, and possibly a couple of movies as well.

Because we started our Dry Veganuary on January 2nd, we've decided to be good and let it run on into the first day of February to compensate. So we'll theoretically be falling off the wagon tomorrow. Any suggestions from you on what we should start off with? Comments in the box below, please.