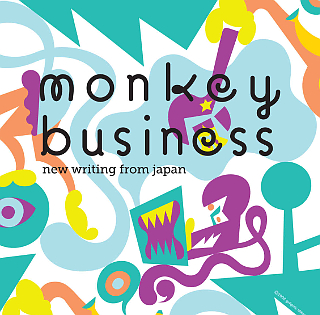 In the meantime, your Simian Substitute Site for March 2020 is Monkey Business. This is not the same Monkey Business that was the Simian Site a month ago: this one's a Japanese literary magazine, written in English, that I discovered at the same Japan Foundation event where I saw Ten Years Japan. The evening's free entertainment started with a panel discussion on current Japanese literature, and the challenges of making it accessible to English speakers. All three participants on that panel can be found on the website: Motoyuki Shibata is the journal's editor, and you can also read the work of translators Polly Barton (with two stories by Aoko Matsuda) and David Boyd (with a story by Hiroko Oyamada). If your curiosity is aroused by the samples on the site, then you can buy the seven volumes of the journal published so far, either on paper or as e-books.

As for what you can expect here this month: well, as you can see, it's been a slow start to the year, but things should hopefully speed up a bit from now on. Lots of February was spent in cinemas, and hopefully during March I can tell you about what I saw there - the previously mentioned Japan Foundation Touring Film Programme, and also another mini film festival making its way back into these pages after several years absence. And as I've already described what it was like to spend January off the booze, I should also write a bit about what it was like being vegan at the same time. Let's see how far through this backlog I can get by the end of March: place your bets in the comments box below.

Yea we love slow TV in our neck of the woods; especially the one with the reindeer.