Simian Substitute Site For May 2020: Primates 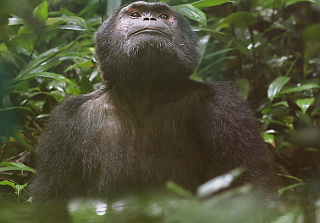 Books: The Belated Birthday Girl and I have started reading before bedtime, on the assumption that it's probably more conducive to a good night's sleep than our previous regime of drinking tea and staring at screens. To make it a more sociable activity, we're reading out loud to each other, taking alternate chapters in the book of our choice. This month's choice has been What Does This Button Do?, the autobiography of Iron Maiden singer Bruce Dickinson. The BBG can actually claim to know Dickinson a little bit - back when she used to fence, he regularly turned up at her club to practice. He's famous for dabbling in a wide range of fields, and this book is largely a list of things he's tried that he's turned out to be successful at: singing, fencing, flying planes, brewing beer, beating cancer and so on. When it comes to things that haven't been so successful, such as writing screenplays, the stories tend to quietly fizzle out. Still, that's the nature of autobiography these days, and Dickinson's entertaining way with an anecdote stops it getting too much into 'needless to say I had the last laugh' territory. By the end I'd become rather fond of his inquisitive nature, which explains why he feels the need to dabble in almost everything - hence the title.

Comedy: Online comedy's going through a curious phase. Podcasts are carrying on much as before, and several of them have pivoted to video without breaking a sweat, such as RHLSTP, The Bugle and Vitriola. But what I currently find really interesting are the various attempts out there to recreate stand-up comedy shows in a world where no more than two people can be in a room at the same time. For a while, Saturday Night Live At The Stand (Saturdays at 8.30pm) was the one to beat, with live compere Mark Nelson doing a terrific job holding together various pre-recorded routines sent in by comics, and even encouraging online heckles along the way. It may still be the one to beat, but they're relaunching this weekend (May 2nd) with some format tweaks, so we'll have to see how that goes. In the meantime, a couple of other comedy clubs have been pushing the idea a bit further and having the acts perform live as well, Zooming in from their own homes. XS Malarkey in Manchester (Tuesdays at 8.00pm) runs a weekly two-hour show held together by the chatty charm of host Toby Hadoke, who spends as much time nattering to the guests as they do performing. But it's also worth keeping an eye on Good Ship Comedy's HMS Unprecedented (Mondays at 8.00pm), which after a month of false starts has finally hit a winning formula - book five acts, leave their microphones on throughout, and use the unparalleled banter skills of Ben van der Velde to get them all sparking off each other.

Food and Drink: As mentioned previously, we were meant to be spending the Easter weekend in Aberdeen for the BrewDog AGM, and that didn't happen. But what happened a couple of weeks after that was the Intergalactic BrewDog AGM, an attempt to migrate the whole event (or at least selected bits of it) to an online environment, because that's how everything works now. Surprisingly, it all worked pretty well, and you may even still be able to watch the whole thing here until they take it all down again. In the space of 105 minutes we got an abbreviated business update from James Watt and Martin Dickie (the section on 'things to look forward to in the next twelve months' was a lot more tentative than usual), live music performances by Yonaka and Blaine Harrison, a delightfully chaotic pub quiz pitting James and Martin against fourteen thousand or so punters in the YouTube live chat box, and - best of all - an online tasting session featuring four beers you could order in advance from their online shop. No queuing to get the beers, and the toilets were in decent nick throughout, so I'd say in some areas that counts as an improvement on previous years.

In the meantime, your Simian Substitute Site for May 2020 is Primates, the official homepage of the new BBC documentary series currently showing on BBC One, Sundays at 8.15pm (in that handy gap between the shows at The Stand and Good Ship Comedy). You can watch entire episodes from this page (UK viewers only, I presume), or just pick out a few clips and read some behind-the-scenes material.

We're all still holding up here, since you ask. Over the last month I've got a better handle on my time management, but I'm afraid to say I haven't really been using it to update things more regularly on the site. Instead, roughly a decade or so since I last did this, I've been working on packaging up various reviews from the site into book form. Of course, this is precisely the point where my publishers lulu.com perform a catastrophic site upgrade that they're still trying to fix a week later. Have a quick look at the right sidebar - are most of the links to my books knackered? Well, they still haven't fixed it, then. It's merely frustrating for me as a hobbyist, but I feel for the real writers out there who are losing actual money while the site's broken.

Anyway, I'll keep on playing with the Edinburgh and LFF reviews for a bit, and you can expect to see the book versions on sale later this year, possibly to coincide with the festivals that may or may not happen. I've also still got those five outstanding pieces to complete that I mentioned a while ago, and I'll try to get those to you at some point as well. But I think we all realise by now that normal service may not be resumed for quite some time. Look after yourselves until it is. Let me know how you're getting on in the comments, anyway.