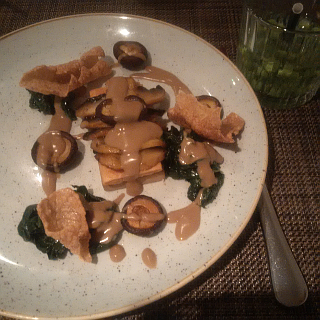 The fascinating thing about suddenly becoming a Person With Dietary Requirements is having to come to terms with the stuff you put inside you without thinking. I assumed that giving up dairy would be the most awkward part of the deal, and it was, but not in ways I'd considered.

The obvious change I'd have to make immediately was in my use of milk - splashed all over my breakfast muesli every morning, and dribbled into my tea at various times during the day. So the first major challenge was: find a milk substitute that doesn't taste like crap in either of those situations. The either turned out to be the hard part. Mylk worked acceptably with cereal, but curdled into a horrifying mess on contact with hot liquids, when it wasn't coming out of the carton in thick lumpy globs because I'd forgotten to shake it. The milk substitute of choice at my office, meanwhile, turned out to be Alpro Soya, and that seemed to work just fine in tea, but had a more caramel tinge to it when I tried doing the same at home (though it's possible that may be due to the difference between the chilled and non-chilled variants: the nut-based milks in their range seem a lot more consistent). Rude Health's coconut 'drink' was basically like skimmed milk that had been watered down even more than usual, and barely worth bothering with. What ultimately worked best was Oatly's oat-based substitute - not the organic one (ridiculously thin apart from at the bottom of the carton), but the semi-skimmed variant that was the most acceptable in both cereal bowl and mug. Plus, it even worked in my usual soda bread recipe, providing you added a tablespoon of lemon juice to get the baking soda doing its thing.

The real dairy problem was with lunches at work. [Pauses to remember the concept of going out somewhere to work, moves on.] It was one of those occasions where a perspective shift suddenly reveals a hidden truth that was staring you in the face all along, which was this: every day at work, my lunch is some sort of variant on a cheese sandwich. Over the course of January, I played around with the various vegan takeaway options available within walking distance of the office. Costa made a big fuss about their vegan ham and cheese toastie, but it didn't work for me - the Quorn ham had a disturbingly squidgy texture, while the 'cheeze' was the colour of the run-off from Donald Trump. (I still can't get over the idea that to name the vegan equivalent of a foodstuff, you just get Noddy Holder to write a song about it.) Caffe Nero's vegan meatball panini was a much better attempt at mimicking a hot meat sarnie, beating the living daylights out of Subway's meatless marinara. For more traditional sandwiches, I rotated between Sainsbury's, Pret and Marks and Spencer's. The latter was the biggest surprise of all: their Plant Kitchen range is almost entirely made up of faked-up versions of classics like No-Duck wraps and No-Tuna Sweetcorn sandwiches, but they're just like the real thing. My one lunchtime regret is that I never got to encounter the mythical Greggs Vegan Steak Bake in the wild, as my local branch kept selling out of them.

So yes, cheese was always going to be the issue: doubly so when it came to pizza. Our once-a-week call to our local delivery outlet wasn't going to cut it - the only vegan option on their menu was potato wedges, and you couldn't be entirely certain about those. One of the biggest surprises of the month was discovering that vegan cheese technology has progressed in leaps and bounds when it comes to pizza. Purezza in Camden, Hawkes in Bermondsey, White Rabbit at home - they're all pretty tasty, and you never feel that any of them are a compromise. (Especially Hawkes, who've realised that the thing that makes vegan cheese on a pizza work is MOAR VEGAN CHEESE.)

When we were cooking at home, things were less problematic. The general rule is that I can dabble in meat when I'm out of the house or ordering in the occasional takeaway, but all cooking done at home is meatless so it can be shared between us both. It only took the smallest tweaks to make those meals vegan. Often The BBG will pull recipes out of her head, so there were a few soups and stirfries that weren't much different from what we normally have. But we had two huge bits of help for the other evenings in the month. I bought Meera Sodha's cookbook East for The BBG's birthday, as she's a big fan of her vegan recipes in the Saturday Guardian, and we definitely grabbed some inspiration from that a couple of times. In return, one of The BBG's Christmas presents to me was Rukmini Iyer's book The Green Roasting Tin, which is conveniently divided into veggie and vegan halves, and provided us with several excellent dinners. Mind you, given that our established division of labour is that she does the chopping and I do the stirring, she found it a bit irritating that she'd bought me a book of recipes that basically go "spend ages cutting up loads of vegetables, then chuck them into a pan and roast them".

Eating out [pauses to remember the concept of etc] generally wasn't too much of an issue either. The three previously documented outings to BrewDog AF that month, not to mention a separate pre-theatre trip to their Seven Dials bar, allowed us to binge on their various vegan burgers, all the better for BrewDog running a half-price deal on vegan food for the whole of the month. Mind you, vegan burgers seemed to be everywhere that month - we also had some pretty impressive ones at Leon (Love Burger) and Honest Burger (a ridiculously good fake bacon affair). We also had a couple of decent meals at Mildreds (the Camden veggie restaurant going full vegan for the month) and Pastaio (just a general pasta chain, but with a dedicated vegan menu with some very nice options).

To be honest, going vegan for a month wasn't particularly difficult. There were, in total, two meals out where we left the house without any real plan as to where we would eat. (For one, we ended up having baked aubergines and a vegetarian mezze at Kilis Kitchen in Islington: for the other, we grabbed a couple of vegan piadinas on the fly from Breadtree in the Southbank weekend market.) The one time I was at a lunchtime work meeting where food was brought in, they happily got me a vegetable gnocchi while everyone else munched on Pret sandwiches (even though, as previously established, Pret's vegan sandwiches are just fine). And on the final night of the experiment - February 1st, because we had unavoidable plans involving both cheese and booze on New Year's Day - we went for a full-on blowout at posh veggie place Vanilla Black. Jacket potato cake, the mushroom pate shown in the picture up top, vegan banana ice cream, all washed down with Seedlip fake gin garnished with your choice of a blood orange slice or frozen peas (because we were still doing Dry January in the middle of all this).

That was nearly four months ago, and the world's changed a tad since then. Did I fall straight off the wagon the day after? Well, there's no denying that my breakfast on February 2nd involved large quantities of buttery scrambled eggs. But since then, I've certainly thought twice about what I'm putting inside myself, taking the vegan option a bit more frequently than I used to. With virtually all our meals being home-cooked at the moment, my meat consumption is still pretty low. And there's one dietary change that has become more permanent: because it can be kept in cupboards for months on end, I've been drinking a lot more vegan milk in these one-big-trip-to-the-shops-a-week times. Who knows, I may even try this experiment again in January 2021, assuming that the food chain's still a thing by then.