Home Archives/Categories About Me RSS Feed Mailing List Email
BrewDogging #71: Cambridge
22: The Death Of All The Romance 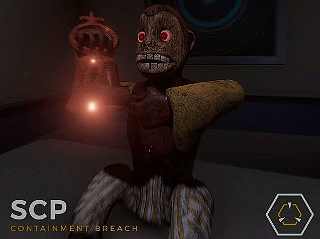 In the meantime, your Simian Substitute Site for July 2020 is the SCP Wiki entry for SCP-983. Strap in: this is going to get peculiar.

SCP stands for Secure, Contain, Protect. The SCP Foundation is an organisation dedicated, according to its mission statement, to identifying objects which "pose a significant threat to global security by threatening either physical or psychological harm," and doing everything possible to reduce the harm they cause. To that end, they're building an enormous database of such objects, classifying them and identifying how they can be secured, contained and you get the idea.

Object SCP-983 is described in the database as follows: "a vintage mechanical monkey with a faded date located on the bottom of the left foot, placing its manufacture at some point in the 1940s by an unknown person or company. The monkey is dressed in the remains of what used to be a popular vest design for circus ringmasters. In the monkey’s left hand, there is a lightly tarnished brass bell. In the right hand, the monkey holds a small brass striking rod... Once SCP-983 physically comes into contact with an individual on their birthday, it will spring to life and do a single back flip before raising its bell and singing a simple song. 'A RING DING DING DING IT’S YOUR BIRTHDAY!'"

Obviously, this is terrifying, so the rest of the article documents various experimental activations of the monkey and what was observed in each instance. And by the end of the page, you might think that would be that. Except that The SCP Foundation has a lot of fans on the internet. A lot of fans. The sort of fans who produce artwork. And videos. And songs. And much, much more. How far down this rabbit hole you go is up to you from this point onwards, as I'm going to run away from it quite fast.

Coincidentally, birthdays will be on this site's mind at some point during the month to come. But also, now we've cleared down the backlog of Tales Of The Before Times, it's time we got some virus-appropriate contemporary content on here. A couple of online film festivals, perhaps? One of them I mentioned here this time last month, and I'm currently finishing off writing it up. The other one is ongoing, and I'll get around to that once it's done. (And no, it's not Edinburgh. Some grudges are too much fun to give up, even after 13 years.)

Comments in the box below, as ever. And keep looking after yourselves.

Well I have just latched onto BUDGIE (Adam Faith) on Talking Pictures at 2100 on Tuesday nights, which was suitable (according to my parents) viewing for 9/10 year old's back in 1970/71.

Not sure however was this strictly a cockney LWT thing back then.