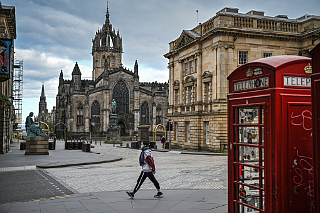 Some festivals have been and gone already. The wholly imaginary Edinburgh International Film Festival - which, as we know, ceased to exist in 2007 - went digital back in June with a programme of a dozen films, offered for a limited period via Curzon Home Cinema. A couple of them have already been released into the wild since, like the Dardenne Brothers' Young Ahmed and - to be honest, the only one in the programme that really interested me - Jóhann Jóhannsson's Last And First Men.

You've also missed the Edinburgh Jazz and Blues Festival, but on another level you haven't missed it at all. Over four days in July, they streamed a collection of archived performances from previous festivals for free, and then left them all up on YouTube afterwards. So if you've got a couple of dozen hours to spare, you can relive day 1, day 2, the first half of day 3, the second half of day 3, and day 4. A couple of low points from our dipping into the programme: The Gil Scott-Heron Songbook largely ignores the man's verbal genius and uses his songs as an excuse for endless tedious guitar solos, while Samedia Shebeen's world-music-influenced DJ set irritates purely because it's obviously being mimed to a pre-recorded mix. Highlights include the proper DJing of Rebecca Vasmant, the noisy syncopation of Graham Costello’s Strata Expanded, and the sheer entertainment value of Katet attacking the movie themes of John Williams for an hour.

That covers Edinburgh's non-August festivals - now let's look at the stuff that would have been happening around now if it wasn't for that meddling virus. In fact, if you're reading this on the day it goes up, then you're just in time for the start of the Edinburgh International Book Festival, which kicks off on August 15th. A festival that's largely based around face-to-face interviews seems like an ideal candidate for a pivot to video, and they've even managed to find some sort of digital equivalent of the signing table for after the talks, with the chance to get a one-minute Zoom chat with your favourite author. Of the events in the programme, we're most interested in Joshua Wong and his tales from the frontline in Hong Kong: Mieko Kawakami, because we've already been to a couple of events this year about Japanese authors in translation: and Stories and Scran, an event that's being accompanied by actual food (if you live in Edinburgh) or recipe cards (if you live elsewhere).

The Edinburgh International Festival, meanwhile, has got its own thing going on. The main thread of their activity this year is My Light Shines On, a series of online filmed performances (available August 8th-28th) which started with an eponymous opening ceremony of sorts. It's based around the tradition of the 'ghost light', the single light left on in unoccupied theatres to let people know that they'll be back. Meanwhile, for lovers of the Queen’s Hall Festival Series - the cheap set of morning classical concerts that have become a habit for myself and the BBG - a series of archived performances is being played on Radio 3 every morning at 11am, and presumably hanging around on BBC Sounds for some time after that.

And so we come to the Edinburgh Fringe, where it begins to get complicated. At one stage, it was looking like the only person who'd have a live show on in Edinburgh this year would be Arthur Smith: you can watch his plans develop and fall apart in this sequence of five tweets. (It's a shame that he couldn't find a coronavirus-safe way of organising a walking tour around a city: after all, other people have managed it just fine.) But instead, the 2020 Fringe is a right old mishmash of online and real-world events, summarised in an official Fringe listings site that's a nightmare to navigate. It's a list of several hundred events just dumped across five pages in no particular order - genre, date, real/virtual, there's no structure in there at all. Still, we can try and pick through it as best we can.

There are a couple of biggish events organised by the Fringe itself. The highest profile one is AJ Bell Fringe On Friday - and be honest, had you heard of this year's Fringe sponsors before they announced these shows?  The principle is sound enough: every Friday in August at 9pm, there'll be an hour-long live-streamed comedy show featuring nine acts, and it'll cost you £9 to watch it. You can either book your virtual ticket through the Fringe box office, in which case your money goes to a central fund for struggling artists: or you can book it though one of your favourite Fringe venues or acts, and the money will go to them instead. Where it all seems to fall down a bit is in the actual show itself, which early reports say is rather bitty and unsatisfying. Still, it may improve over the duration of the run, so it should still be worth a look. Running alongside that is AJ Bell Fringe Pick & Mix, a randomised YouTube playlist featuring a selection of 60 second clips, a mixture of short punchy performances and trailers for shows you'll never get to see.

Meanwhile, buried in the mess of those Fringe listings, a lot of familiar names are doing their own thing. It's no surprise that the Laughing Horse Free Festival has a series of real and virtual events available - after all, all stand-up comedy has been working to the collection-bucket-on-the-way-out funding model since March. (It looks like the PBH Free Fringe is sitting this one out, though.) A couple of the venues are running their own video-based minifests, such as Zoo and The Space. The Traverse Theatre are cunningly reviving their Breakfast Plays as a series of daily audio-only podcasts called New Tracks, dropping daily from August 24th to 28th at wherever you normally get your podcasts from. Surprisingly The Stand, who've been smacking it out of the park with their weekly Saturday night stand-up streams (regular compere Mark Nelson should be considered a key worker for what he's been doing), are keeping relatively quiet for the Fringe: their Saturday stream's been relocated from Edinburgh to Glasgow for the whole of this month, and they're apparently thinking of knocking it on the head after that. But if you want to give one of the world's best comedy clubs some love, you could consider buying an audio download of Daniel Kitson's 2007 show It's The Fireworks Talking: if you do that in August, half the money will go to the club.

There are even a couple of new festivals popping up in the middle of the Fringe. Shedinburgh is a collaboration between the aforementioned Traverse, London's Soho Theatre, and a bunch of acts willing to stream their live shows for one night only from a shed - either one they own themselves, or a custom-built one on the premises of one of the theatres. (Inua Ellams' Search Party is the one that stands out for us, given how much we enjoyed his An Evening With An Immigrant a couple of years ago.) There's also the Just Festival, a week-long "social justice and human rights festival" (August 16th-23rd). At first glance it looks heavily lecture-based like the Cabaret Of Dangerous Ideas, but its closing night sounds irresistable, with a concert by The Countess Of Fife - "an insurgent country outfit featuring Fay Fife, best known as singer with The Rezillos."

Finally, if you want to take the idea of a virtual festival as far as it can possibly go, let me introduce you to Improvbot on Twitter. A computer has been fed with the entire Fringe programme listings for 2011-2019: every hour, it juggles around that collection of two million words and burps out a randomly generated listing for a show that will never exist. Here's the most recent one it produced as an example: "THE WHISKY TORRES: This interactive recording of the scandalous world, troubled beliefs and gossel and the topic and surprise this horror tale about their darkest loves. With loss and cannibalism." To be honest, I've seen weirder.

So even if you can't make it physically to Edinburgh (and most of us can't), there's still plenty of things happening. How many of these The BBG and I are actually going to see this year is another matter entirely, of course. Still, as I usually say at this time every year: watch this space.