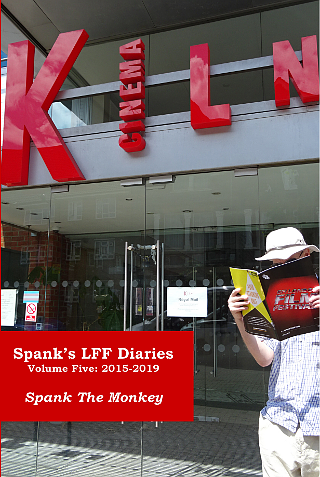 What's there to say about Spank's LFF Diaries Volume Five: 2015-2019? Not much, really. Like the previous four volumes, it's a collection of London Film Festival reviews, all written the morning after I saw the films and slapped straight onto this website. For the book, I've taken out all the stuff that wasn't by me (guest reviews and photos, basically), tidied up a couple of howling mistakes in the text, added a ton of hindsight in the form of 47 footnotes, and asked The BBG to take a nice picture for the cover (requiring a location shoot during the height of lockdown in glamorous Kilburn). And now you can buy it from lulu.com for eleven quid plus shipping.

So, at the end of a period that I'll grudgingly admit is closer to six months than six weeks, The Furlough Trilogy is now completed. And, possibly more impressively, I now have five volumes of London Film Festival reviews available to buy, covering 31 years of my attending the event. Just in the nick of time, really, seeing as my 32nd one starts tomorrow...