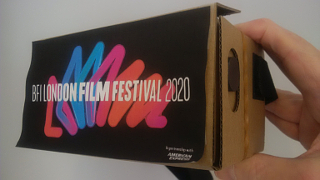 The story so far:

Coronavirus disease 2019 (COVID-19) is an infectious disease caused by severe acute respiratory syndrome coronavirus 2 (SARS-CoV-2). It was first identified in December 2019 in Wuhan, Hubei, China, and has resulted in an ongoing pandemic. On 5 October, the WHO said that one in ten people around the world (around 800 million) may have been infected with COVID–19. As of 7 October 2020, 35.8 million cases have been reported across 188 countries and territories with more than 1.05 million deaths; more than 24.9 million people have recovered. Common symptoms include fever, cough, fatigue, shortness of breath or breathing difficulties, loss of smell and taste, and the wholesale disruption of film festivals worldwide.

For some reason, that last bit never stays on the Wikipedia entry for long whenever I try to add it. Some people just have no sense of perspective.

My 32nd London Film Festival - running from October 7th to October 18th, 2020 - is going to be a bit different from the previous 31. We've all known that for some time now: we just didn't know how different. As it stands, the premier event on the UK film lover's calendar has ended up opening in the same week that the release of the new James Bond film has been knocked back by another five months, resulting in Cineworld and Picturehouse closing all of their cinemas while Odeon moves to a weekend-only schedule in many of its locations. It's either the worst time for a twelve-day celebration of cinema, or the best time.

Of course, we've been rehearsing for this for several months now at Château Belated-Monkey. Thanks to We Are One and Sheffield Doc/Fest, we've seen how film festivals can be successfully held entirely online, using online chats and filmed Q&A sessions in an attempt to recreate the interactive element of a real-world festival. But the LFF is taking it one stage further, creating a hybrid event - part online, part in cinemas.

The cinema strand is the most uncertain factor in all this. At any moment, a sudden announcement could put us all back into lockdown and kill off any chance of us being in cinemas at all. With that in mind, the LFF has played it relatively safe, with just a dozen or so films making it into cinemas. To take account of social distancing, the screening policy has changed dramatically - films are playing in all three screens at BFI Southbank (with staggered start times), plus in half a dozen other London cinemas, plus in a similar number of arthouse venues across the wider UK. Sadly, the Welsh screenings at Cardiff's Chapter Arts Centre have already had to be abandoned because of the extended restrictions there - it's anyone's guess as to how many other venues will have to pull the plug before the end of the festival, and we'll just have to wait and see about that.

The Belated Birthday Girl and I have been making the occasional visit to the pictures since the end of lockdown in July - four films so far, plus one caught in an open-air screening - so we're not averse to the idea of spending time inside a cinema these days. However, it does depend very much on the cinema. When we were planning exactly which real-world LFF screenings to attend, we looked at the various cinemas on offer and their policies regarding keeping their customers safe. At one extreme you've got BFI Southbank, who've gone as far as physically ripping out every other seat from their auditoria (apart from 32 in NFT1 that have been left configured as 16 pairs). At the other extreme you've got the ICA, the only London LFF cinema not offering reserved seating at all, instead assuring you that their staff will position you in a suitable section of the auditorium. From personal experience, the staff at the ICA can't be trusted to serve you coffee within an hour of you entering their cafe bar, so I don't think I'd want to trust them with anything regarding whether or not I survive my visit there.

Either way, for anyone who's unable or unwilling to enter a cinema right now, the good news is that the majority of the festival will be held online, as a series of pay-per-view screenings via the BFI Player - so you don't even need to be in London to attend this year. (Though I don't think it'll work outside the UK, sorry.) One look at the programme shows you what a contractual nightmare it must have been getting the streaming rights to the fifty-odd films they're showing. Some of them have to be watched at a precise screening time: some of them are available for 72 hours after they initially go online: one of them is available for 96 hours. It's made planning our schedule for the next twelve days a messy affair, but we think we've got a rough idea of what we're seeing.

But there's more! Those fifty-odd films are just the feature-length ones that you'll have to pay to see: in addition, there's a ton of stuff you can watch online for free. The Archive, Experimenta and Shorts sections of the programme don't require any payment at all this year. The same applies to the new Expanded strand, a selection of virtual reality films that can be watched on a variety of devices from a full-blown Oculus Rift to a web browser with a pair of functioning arrow keys. (Here, we'll be experimenting with a £3 pair of cardboard VR goggles, but have no idea yet if they'll actually work with our phones or not.) And there's a full series of talks and other live events that will be slapped onto YouTube for everyone to enjoy, although personally we'll be catching up with those later on rather than watching them live. (As usual, all the talks were announced after the rest of the programme went on sale, and they all clash with films we've already booked to see...)

At one point, it looked like this would be a fairly quiet festival compared with previous years: now, if our spreadsheet's anything to go by, it might actually be one of our busiest. The one regret I have is that this year's terrific promotional artwork - a bulgy neon reworking of the arrowhead design from previous years - is barely getting seen out in the real world, mainly because the festival didn't produce a hard copy programme this year. I suggested to the fest's artistic director Tricia Tuttle on Twitter that LFF artwork facemasks might be a good idea, and despite her liking the tweet nothing came of it. It didn't take me much effort to customise my cardboard VR goggles to use the logo, so maybe she could consider that instead: there's still time.

So, despite everything, it's business as usual, and it all starts now. Twelve days of me seeing stuff at the LFF, and writing about it for you here the morning after. At least, that's the plan - given the current state of the world, anything could change at any minute. Watch this space.