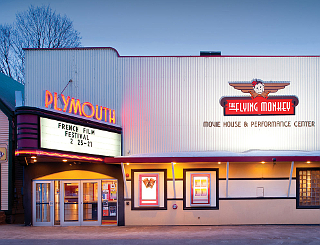 In the meantime, your Simian Substitute Site for October 2020 is The Flying Monkey Movie House and Performance Center, a fine-looking arts complex located in Plymouth, New Hampshire. The programme's a little sparse at the moment, because of, you know, everything, but there's still stuff going on. If you're interested in film, they've got a screening of the original Nosferatu in the runup to Halloween: while if music's more your thing, on October 9th they've got Pink Talking Fish, a tribute band that plays the music of Pink Floyd, Talking Heads and Phish, possibly even simultaneously.

Regular visitors to this site will know that at this time of year, I'm going to be heading more in the direction of film. Yes, despite it all, October is still London Film Festival season, and that's pretty much all that's going to be happening here for the next few weeks. We'll start off with one more book publication announcement, meaning that I'll have 31 years worth of LFF movie reviews available in print. Then just a couple of days after that, it'll be time to start work on reviewing year 32. As ever, expect daily reports of screenings: this year I'm hoping they'll be a mixture of both virtual and physical events, though obviously everything could change at the drop of a facemask.

Continue to look after yourselves, and all that. How are you keeping, anyway? (Space for answers below, as usual.)

The BBG has pointed out that I forgot to mention one of the highlights of Japan Matsuri Presents. Minyo Crusaders are a band that performs old Japanese folk songs, but in the musical styles of every country in the world other than Japan.