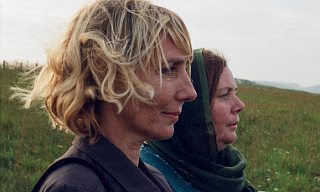 There are some people - admittedly, they all have connections to commercial property landlords, so 'people' may be too strong a term - anyway, they're currently suggesting that having a large chunk of the country's workforce working from home is reducing their productivity. Which is bollocks, as anyone who's actually working from home these days will tell you. The lack of physical boundaries between home and working life means that, if anything, most of us are spending more hours on the job than we were pre-pandemic, and using them more effectively. And I suspect it's a similar story with our London Film Festival this year. With reduced travelling times, reduced film prices and little incentive to spend too much time out in the plague-filled world, a four-event day has become our norm this year, rather than a little indulgence we allow ourselves at the weekends.

Today turns out to be our second and final four-feature-film day this year, in case you were wondering. (With the exception of last Sunday, most of the rest have been three features plus an event or a shorts programme.) And we start off with this debut feature from writer/director Aleem Khan. Mary (Joanna Scanlan) and Ahmed (Nasser Memarzia) are a happily married mixed race Muslim couple living in Dover. But when Ahmed dies suddenly, Mary discovers that he'd been keeping a mistress in Calais for several years. She travels over to Calais herself, hoping that once she gets there she'll work out what to do with this information.

I've only really known Scanlan from her comic roles in things like The Thick Of It, so her performance in this film is a revelation. She nails the sheer numbness that grief brings, rather than playing it in a huge overemotional way. This is crucial, because it makes it totally believable that when the time comes to confront Genevieve (Nathalie Richard), she finds that she can't do it, and instead takes an easy way out of the confrontation. Which, inevitably turns out to be much harder in the long run.

Khan's screenplay is full of telling little details that surprise you and help us understand these characters a little better. From Mary absent-mindedly making two cups of tea long after the death of her husband, to the crass subtext of the misunderstanding Genevieve makes which effectively sets up the rest of the story, we gradually piece together a full picture of the two women. Khan takes a beautifully humanistic, non-judgmental approach to all his characters, and brings them - and us - to a satisfying conclusion. Another fine debut film for this year's festival, and another name to watch out for in the future. 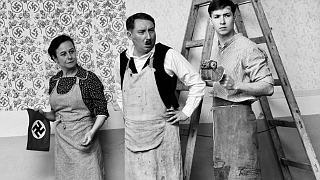 A quick sidenote here - if it's still available when you read this, press the 'Film introduction' button on the BFI Player page for Shadow Country, and marvel at its host Peter Hames' spectacular shelving background. But I digress.

1938 is a bad year to be a village on the Czech-Austrian border. At the start of Bohdan Sláma’s film, the village of Vitorazsko is currently under Czech rule (having changed ownership a couple of times before then), and many of the locals feel that they're getting a raw deal. Seeing that the Germanic countries are doing quite well for themselves, a lot of the villagers think that being part of the Reich will solve all their problems. Unfortunately, many of the others disagree, with the result that the village splits into two violently clashing factions. While the war is on, the Germanic faction holds sway: once it's over, the pendulum swings back in the most alarming fashion possible.

Shot in pin-sharp widescreen black and white (by Diviš Marek), Shadow Country is another one of this year's LFF films that cries out for a rewatch on the big screen. The claustrophobia of the village setting is maintained for almost the whole running time, emphasising that these are close neighbours who've ended up going to war with each other. Ivan Arsenjev’s script has a huge number of characters in it, and even though you might not catch all their names, you're hooked into their stories from start to end.

If you're not familiar with the history, you may think that once we get a title card reading 1945, we're over the worst of it. But that's the point where Sláma doubles down on the intensity, resulting in a study of human inhumanity that bears closest comparison to City Of Life And Death, the 2009 Chinese movie about the Nanjing massacre. Like that one, this is bleak viewing, but kind of brilliant with it. 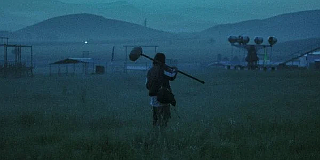 We find out what sort of guy Kun (Zhou You) is from the first two scenes of Striding Into The Wind. In the first one, he's noisily and messily failing a driving test: in the second, he's buying a knackered old 4x4 for very little money. Technically he's a Beijing film student, who always causes trouble at the few classes or film shoots he can be bothered to attend. Most of the rest of the time, he's hanging out with his even less driven mate Tong (Tong Lin Kai) as they make plans for a road trip somewhere. Inner Mongolia, perhaps, though they're not fussy.

Wei Shujun’s film starts well: you're quickly hooked by the main characters, and enjoy the episodic scrapes they get into. For a film festival audience, this is especially the case when we're watching them doing their coursework, which catches the tone of pretentious student filmmaking perfectly. The problem is, once it's set up this situation, it doesn't quite know what to do with it.

Part of the problem is that at 130 minutes, Striding Into The Wind is the second longest film we're seeing this festival. We saw the longest one just a couple of hours ago - it was Shadow Country, which at least had a meaty historical subject and a solid two-part structure to justify its length. Here, we have a road movie that doesn't even get onto the road until well into its second hour. It has quite a few amusing ideas scattered through the full length of its running time, but it really needs to cut out some of the flab in between them. Anyway, you'll be pleased to hear that our run of Final Films Of The Day That Are No Fun At All has finally been broken. For a very specific definition of Fun, perhaps, but still. Brandon Cronenberg’s film stars Andrea Riseborough as Tasya Vos, a hitwoman of the future with an absolutely foolproof method of killing people untraceably. It's basically Quantum Leap, but if Sam Beckett was female and psychotic. Her latest job requires her to temporarily inhabit the body of Colin (Christopher Abbott), and will put that theory about it being an absolutely foolproof method to the test.

You could argue that it's massively presumptuous to think that Brandon Cronenberg's films will be as violently messed up as David Cronenberg's: just the first few minutes of Possessor should put you straight on that score. This is a dark, brilliantly thought-through piece about the way we construct our identities, and how fragile they can be. Along the way, there's some smart satire on modern technology, with the office where Colin works doing some of the most perverse data mining you'll ever see. And yes, there's quite a lot of spectacular gore, all done with practical effects just like in the old days.

Andrea Riseborough is as extraordinary as usual in the lead: she's one of those actresses who looks entirely different in every single role, which suits the chameleonic nature of Vos down to the ground. But for a good chunk of the movie she's effectively replaced by Christopher Abbott, who's equally impressive. The two actors have to mirror each other's mannerisms without it looking like an obvious impersonation, and they both rise to the challenge. And there's an excellent supporting cast behind them, with Sean Bean in particular doing what he does best. If this was specifically added to the LFF schedule as a Friday night film, with all that entails, then it's done its job just fine.