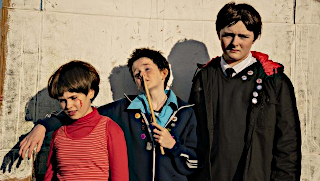 <Peter Kay voice> Hey, anyone here remember rabies? </Peter Kay voice> For those of us of a certain age, fear of rabies was one of the key pillars of 1970s British racism: countless scary adverts on the telly convinced us that foreign animals were queuing up to come over here and kill us all with their mad spit. So it's totally believable that in 1979, three kids whose primary source of information was the TV would come up with a song like Rabies. Apologies if, now you've heard it, you're singing it to yourself for the rest of the day. I know I will be.

Sound For The Future is the story of a child band called The Hippies, except they weren't really a band. They were three siblings - Matt, Toby and Polly Hulse - who were bored during the 1979 summer holidays and decided to make up some songs. They didn't really have access to musical instruments, and didn't know what they were doing, so they assumed they were punks. They recorded one EP - well, a few songs on a cassette that they titled Sound For The Future - and then broke up shortly afterwards. Forty years later, Matt Hulse is now an artist and filmmaker, and wants to make a movie about The Hippies. His original plan was to get the three members of the band back together for a reunion, but Toby doesn't want to be involved. So he holds auditions with a Glasgow youth theatre company to create a facsimile of the band. Then he sets up a rival band with the kids who failed the audition. And he talks to his parents, whose divorce seems to have been part of the trauma that resulted in the band being formed. And he takes his Snoopy doll to China to have a suit made for it, and he films the last ever performance by Gang Of Four's Andy Gill, and he dances on Malcolm McLaren's grave, and...

During Sound For The Future, Hulse threatens once or twice that this will be his last film. In the Q&A afterwards, he says it probably won't be - this was more of a strategy to help him focus on telling the story. Unfortunately, there's a side effect to this approach: if you think you're making your last film, you're going to try to cram in everything, in case you don't get the chance to do it again. Because Hulse is more of an artist than a filmmaker, and he's more interested in the process than the finished product, this is largely a film about how he made the film - and as long as you're comfortable with that degree of self-indulgence, it works well on that level. (If you're not, then you shouldn't be going near the Experimenta strand of the festival in the first place.)

But at the same time, he's still trying to tell the story of the band, and a memoir of his life to date, and work through some of his own personal demons on screen. Each of these threads would be a decent enough subject for a movie, but putting all four of them in the same one means that none of them are given enough time to develop. The energy of trying to keep all these plates spinning keeps it going for a while, but the film's run out of puff some time before the end. Shame, that. Still, at least we have the songs. 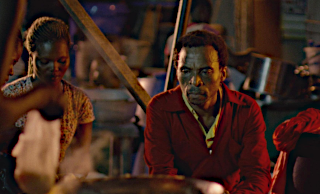 Migration is going to be a hot topic in cinema for some time to come, and Arie and Chuko Esiri’s debut feature has the advantage of coming at it from a different angle than most. Set in Lagos, it's a film of two distinct halves, following two characters as they independently make plans to move to Europe. Mofe (Jude Akuwudike) is an engineer at a printworks, while Rosa (Temi Ami-Williams) is holding down a couple of jobs at a hair salon and a bar. Both of them are scraping together the cash to pay for a visa: in each case, external pressures involving family, health and sheer bad luck will make that process much harder.

We go to film festivals to find out more about foreign countries and how they do things, and my main takeaway from Eyimofe is that I now know what a Nigerian Ken Loach film would look like. The similarities are there: a naturalistic look (it's visibly shot on celluloid, which helps), an interest in the lives of ordinary working people, and an assumption that seeing them fail makes for good drama. The details may vary, but the basic problems they encounter are more or less the same as ours. And inevitably, the women get it worse: the male section of the film is driven by Mofe's work ethic, but the female half is driven by Rosa's sexuality. You can't be sure if this is a failure of narrative imagination, or just a statement of the way things are everywhere.

I wasn't quite sure about Eyimofe immediately after seeing it, but it's lingered in my memory since, which is usually a good sign. The little details of daily Lagos life are fascinating - the selling of official documents in open-air markets, the matter-of-fact treatment of Americans as sugar daddies, the rickety nature of its electrical system. (At one point during a dinner party scene, the power goes off for 15 seconds, and nobody even stops talking.) From the British perspective, when we talk about migration these days it's all about the people arriving here, and how we can stop them cluttering up our culture with their alternative perspectives and interesting food. But this film shows the start of the journey rather than the end, and how the desire to have a better life has to include the option to try and make it elsewhere. And it highlights a rather sad paradox: the sheer number of hoops you have to jump through to get out of a country can make you want to stay there even less. 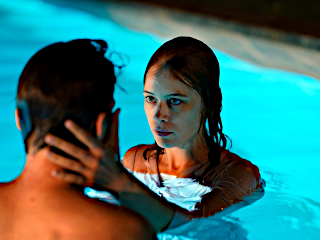 We're back at BFI Southbank for yet another screening that isn't happening on our telly. We're doing this to demonstrate our support for cinemas in general, and the ones which have put visible effort into making audiences feel safe in particular. We're so committed to doing this that tonight, against all our better judgment, we're seeing a film that's been selected by Jonathan Romney, the LFF's lead programmer for European Art Films That Are Never Quite As Good As He Says They Are.

This one's the latest by Christian Petzold, whose reputation is solid - although I've managed to avoid all of his films up until now. It starts off, more or less, with an elaborately engineered meet cute between town planning historian Undine (Paula Beer) and industrial diver Christoph (Franz Rogowski). The two of them fall in love and get to know each other, but Undine has a secret that Christoph will take a very long time to discover.

Unless, of course, Christoph reads the synopsis of the film on the LFF website, which spunks away Undine's secret in literally its first sentence. (Sure, lovers of mythology and Neil Jordan's less popular films might suggest that there are other clues available, but shush.)

It's a tricky one, I know. I'm reasonably certain that Petzold intends the key fact about Undine's past to come as a surprise, given the way that it's drip-fed to you throughout the duration of the film. But publicists need a hook to draw in audiences, and that fact gives people a one-word reason to see it. For once, I don't want to blame Romney, as he's been put in an impossible situation here, as has anyone who wants to talk about the movie. But your reaction to Undine's story as it unfolds is inevitably seen through the lens of what you've read about her before the film started.

Still, in his filmed introduction Romney refers to Petzold as a master storyteller, and based on the evidence of Undine I can't argue with that. The opening ten seconds are a perfect example - two static, wordless closeups of faces, and once you've seen them you know exactly what happened just before the start of the film. You also have to admire the chutzpah of his focus on Undine's day job: a full fifteen of the ninety minutes of the film is dedicated to lectures on the history of Berlin's urban planning, which is either fascinatingly informative or a provocative waste of the audience's time. Or both.

There's an awful lot to enjoy in Undine - the refusal to tie up every single loose end in the story, the unexpectedly up-and-down pacing, and the charming performances from the two leads. But if I'd been trusted with all of the film's surprises, I could have enjoyed it even more.

My take on the bifurcated endings of Eyimofe is that it acknowledges that women get the shitty end of the stick, FWIW. Like you, I wasn't initially very taken with it, but it stuck with me.

Giving away the supernatural twist in films is something of a mini-theme this year.