Reviewed today: Chess Of The Wind, A Day Off Of Kasumi Arimura, Siberia, Wolfwalkers. 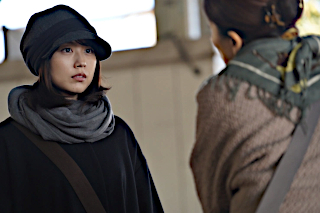 I'd imagine that I wasn't the only person who read the writeup of A Day Off Of Kasumi Arimura on the LFF website, and assumed that Hirokazu Kore-eda, the most consistently brilliant director in the world today (not counting The Truth, which I haven't seen yet), now has a TV show. As Rowan Woods points out in her introduction, the LFF has been sneaking episodes of television series into the programme for quite a few years now, acknowledging that more and more film directors are dabbling in the medium. But in the same intro we discover the full story: Kore-eda's only directed the first and third episodes of this series of eight, and hasn't written any of them. What we've actually got here is a situation that's been a thing for quite some time now: a big-shot movie director being brought in to shoot the pilot episode of a show, so that a safe (and marketable) pair of hands can set its overall tone. It's what Martin Scorsese did for Boardwalk Empire, or Lord & Miller (the Lego Movie guys) did for Brooklyn Nine-Nine.

It's an intriguing premise for a show, anyway, once you get past the clumsiness of the translated title - I always think of 'off of' as one of those standard bits of comic bad English grammar, as used in the sentence 'I'm a big fan of Kasumi Arimura off of A Day Off Of Kasumi Arimura'. Arimura is an actual Japanese actress playing herself here, although there's a very insistent disclaimer at the end saying that this show has nothing to do with her real life. Anyway, at the start of the episode the film set she's working on is closed down because of flu, meaning that she's got an unexpected day off work. She uses it to take the train down to see her mum, who chides her about how infrequently she visits, as mums do. As for Arimura, she's more concerned about the male friends her mum's made in her absence. The second one, in particular.

Obviously, you can't go into this expecting a forty-minute version of a Kore-eda film. It's a very typical Japanese light TV drama, and you can find quite a few of those on Netflix these days (I can recommend Midnight Diner as a good place to start). You can tell it's television rather than cinema, as the quieter moments are underscored by sad acoustic guitar, rather than the sad piano you get with Japanese movies. But even within this slightly cliched framework, Kore-eda still shows his influence in his non-judgmental handling of the characters, and his use of long takes to give the actors something to chew over. There's a sweet rambly atmosphere to the whole affair, which gets through at least half its running time before anything resembling a plot starts to make its presence felt.

The result is a pleasant enough bit of telly: more or less self-contained, but with one or two strands left dangling for future investigation, just like a good pilot should do. I'd be curious to see how Arimura's future days off pan out, though I'd hope that they don't use the 'set closed down due to viral infection' excuse too many times in the current situation. 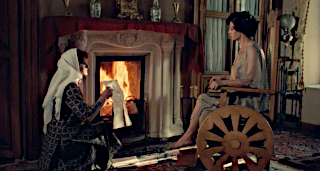 The archival Treasures section is one of my favourite bits of the LFF, partly because it's always been run by people with a palpable love for the medium - Clyde Jeavons in the old days, Robin Baker now. The chance to see old films in better condition than you've ever seen them before is one of those things that will always lure me into a cinema, which makes it a bit of a shame that the few films in the strand this year are all being restricted to online screenings. They could have given one of those dozen cinema slots to an old classic, surely?

Well, here we are anyway, spending another weekend afternoon in front of a restoration of an old film - although this one's from Iran in 1976, which may be some sort of first for me. Chess Of The Wind tells the story of a rich family and their battles over an inheritance. The wheelchair-bound woman of the household (Fakhri Khorvash) was expecting to get it all after the death of her mother, but her terrible husband has grabbed everything for himself instead. It's a messy situation, but it's nothing that a fatal blow to the head can't fix. Or can it?

The Treasures strand has always prized films with a convoluted history, and Mohammad Reza Aslani's film has a more convoluted one than most. Its first festival screening in Iran was either jinxed or sabotaged (depending on who you talk to), possibly the victim of a general backlash in the country against art cinema. It sat on the shelf for a couple of years, and then the Iranian revolution provided a whole new set of reasons for the film never to see the light of day - there are a couple of scenes in Chess that they might just have got away with before the change in regime, but not after. For years it could only be seen in a terrible bootleg version on YouTube, fuzzy as hell and with all the contentious material removed from it. (As the bootleg was mentioned in the Q&A, I don't feel too bad about linking to it above.) The final twist is that the original negatives were eventually discovered in a junkshop, and since then Aslani has been co-ordinating the restoration of the film with the help of his daughter in France (because it's still banned in his home country).

Somehow, at the end of all this we have a glorious looking film to watch. The interiors - most of the film takes place inside a single house - are beautifully designed and lit, and make you wish that the LFF had found a way to get this onto a big screen. They look so good that one of the structural conceits of the film - regular cuts to a Greek chorus of washerwomen outside - becomes annoying every time it happens, because you just want to get indoors again. The plotting is enjoyably melodramatic, but a little bit too slow for my liking: and inevitably, there are historical aspects to the details that a Western audience simply isn't going to get. Still, it works for me on the levels of simple eye candy and of a glimpse into an unfamiliar period of a nation's cinema. 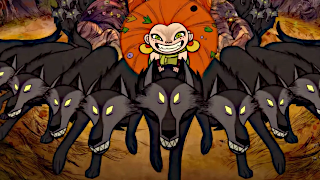 We're in Kilkenny in the 1600s, and the English are in town. Oliver Cromwell himself (Simon McBurney) is looking to make his presence felt, and as he can't tame the local population he decides to try and tame the wildlife instead. Bill Goodfellowe (Sean Bean) is one of the English soldiers charged with hunting down and killing the wolves that are threatening the town. His daughter Robyn (Honor Kneafsey) is initially keen to help him in this task, but she changes her mind when she encounters a wolfwalker - a mystical creature that's human when it's awake, but a wolf when it sleeps.

Wolfwalkers is the latest film from Cartoon Saloon, the Irish animation studio previously responsible for The Secret Of Kells and Song Of The Sea: directors Tomm Moore and Ross Stewart consider the three films as a linked trilogy based on Irish folklore. I haven't seen the other two films, and I think that's a fault I should rectify very soon. In an age where animation seems to be aiming for photorealism and computer perfection, Wolfwalkers feels like a throwback in its determination to not only look hand-drawn, but to revel in the stylisation that hand-drawing allows you to get away with as standard. The film uses every graphic expressionist device you can think of - comic-book style panels, distorted backgrounds, changing aspect ratios, rough-edged frame borders - whatever it takes to get the desired effect for that particular shot, before moving on to the next one.

There's a danger that all of these stylistic devices will clash against each other alarmingly. Nothing wrong with that per se - Spider-Man: Into The Spider-Verse did just that and made a feature of it - but here all the visual elements combine perfectly to result in a film that simultaneously looks like nothing you've ever seen before, and everything. Having a strong story and characters helps with that, as well as being proudly Irish without descending into Oirishry. If nothing else, Irish audiences will love the crowd-pleasing climax - hopefully English audiences will, too. 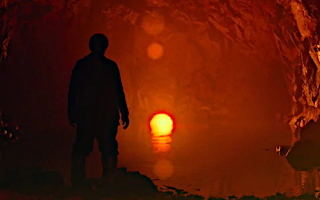 The LFF sent me an email the other day, warning me that Siberia contains 'scenes of a graphic nature'. What? Really? An Abel Ferrara film contains graphic scenes? Presumably when they showed The Two Popes last year, they had a content warning about scenes of Catholicism.

Anyway. Clint (Willem Dafoe) is running a bar on a Siberian mountain, which he describes as 'the end of the universe'. He spends part of his time serving an unlikely set of customers, few of whom speak English, and the rest of his time going nuts. One day he takes his huskies out on a journey, so he can dedicate more of his time to the 'going nuts' part of his life. What follows is an episodic mixture of flashbacks, fantasies and who knows what else. It's best summarised by the scene where Clint is invited on a fishing trip by his father, and has to tell him "Dad, you know what the doctor said... he said you were dead."

Sadly, that's the only joke in the entire film (apart from the one-off coincidence of seeing this back to back with Wolfwalkers, and finding we've programmed a Simon McBurney double bill by accident). Far too often, Ferrara just falls back on Lidl quality surrealism to depict Clint's state of mind - it's all caves full of naked people, or a cabin full of skinheads shooting guys in the head. Despite the content warning, the problem here is that the scenes aren't graphic enough - even the ending raved about in the programme notes turns out to be a little burst of whimsy rather than a big finish. If Ferrara had really gone for broke, this could have been quite something, but these days he's not as provocative a provocateur as he used to be. Mind you, he can still talk a good game, so the Q&A session attached to the film is worth a look, even if the film isn't.