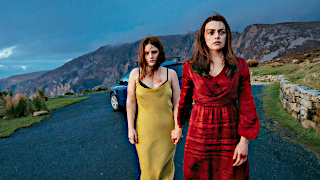 Today's broadcast is brought to you by the letter B, for 'borders'. As The BBG astutely observed once, the signing of the Good Friday Agreement is Britain's equivalent to the fall of the Berlin Wall: a huge political action that finally brought a resolution to decades of conflict. The idea that there are people in our government who are currently willing to treat it as minor collateral damage on the route to Brexit is nightmarish to those of us who remember what Ireland - and for that matter, the British mainland - used to be like.

Cathy Brady's debut feature is set in a Northern Irish border town in the present day, but the weight of the past and the threat of the future are a constant background hum throughout. After running away from home for several years, Kelly (Nika McGuigan) has finally come back, to the initial discomfort of her sister Lauren (Nora-Jane Noone). Kelly brings back with her fond memories of their late mother: they're memories that Lauren is keen to avoid, especially given the circumstances of her death, and the growing fear that history might be about to repeat itself.

The politics of the border are kept very much at the level of subtext, so it worried me at one point when the appearance of a couple of ex-IRA men threatened to turn this into yet another post-Troubles thriller. Thankfully, that's not the case: Wildfire is much more interesting as a carefully drawn study of two sisters and the trauma that ultimately binds them. (It's interesting to see the Wellcome Trust mentioned in the opening credits, apparently for their help in researching the mental health aspects of the story.) The two leads are utterly believable as sisters (a scene of them dancing drunk to Van Morrison is a joyous highlight), and it's tragic to learn that Nika McGuigan passed away shortly after the shooting: this was her first feature film, and I'd like to have seen more of her. But hopefully we'll get to see more of the director, as this is a blisteringly confident start to a feature film career. 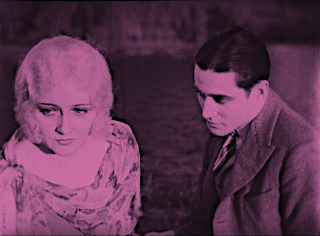 It's archive time again: and I guess in a real world festival The Cheaters could have been an Archive Gala, as it's a silent film from 1929 with live accompaniment. In a nice touch, we get what Briony Dixon describes as Piano-Cam: a small livestream of Cyrus Gabrysch playing the keyboard accompaniment, tucked into one of the windowbox bars to the left of the main picture. He does a fine job, and it's a shame that the camera is angled such that he can't give us a wave at the end.

To be honest, the backstory of The Cheaters may be more interesting than the film itself. It's an Australian silent film, which is quite a rare find these days (not that rare, though): and it's the one surviving feature by the McDonagh sisters, which is definitely rarer. There were three of them: Paulette wrote and directed, Phyllis produced and did art direction, and Isabel acted under the stage name Marie Lorraine. In these F-rated times, that's quite an achievement, and it was even more so a century ago.

Bill Marsh (Arthur Greenaway) is caught on the fiddle by his boss John Travers (John Faulkner), and sent to jail for it. We jump forward two decades (represented by a once-in-a-lifetime dissolve shot of the Sydney Harbour Bridge being built), to a point in time where Marsh is now the head of a major criminal organisation dedicated to getting his revenge on Travers. His daughter Paula (Marie Lorraine) is one of his gang's best assets: but as she's the star, you know that at some point she'll have doubts.

I've seen quite a few silent films over the years, and I know for a fact that they don't need to be as slow as this one. The combination of over-expository intertitles and the cast's slow reaction time make this film a good three quarters of an hour longer than it really needs to be. But its melodramatic storyline keeps you hanging on through the dull bits, and if you make it to the end you'll at least be rewarded with a genuinely unexpected conclusion. 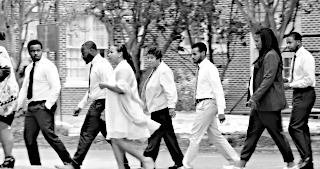 Bonjour à Ciné Lumière, the second of the small number of cinemas we'll be visiting during this LFF. And as is usually the case, we won't be seeing any French films in one of the Frenchiest buildings in London: possibly the only place I've been to so far where the coronavirus advice includes the specific warning 'don't shake hands or kiss people on the cheeks', and I'm not even making that up.

No, today we're seeing an American documentary: the third one I've watched this year about problems with the US penal system, after belatedly catching up with 13th and seeing Bring Down The Walls at Sheffield Doc/Fest. Like those two films, Time argues that for African-American men, the penal system is effectively slavery under another name. It follows the case of Robert Richardson, who was sentenced to sixty years for attempted armed robbery. His wife Sibil Fox Richardson (aka Fox Rich) knows he's guilty - hell, she did a short stretch in prison herself for being the getaway driver. But since getting out, she's dedicated 18 years of her life (and counting) to campaigning for her husband's early release, all while raising a family of six children.

To hear director Garrett Bradley tell it in the Q&A, she'd shot all the material she wanted and was getting ready to edit, when Fox suddenly dropped a huge bag of tapes in her lap: fifteen years worth of video letters to her husband, which she'd been saving up to give him when he eventually got released. It's Fox's personal archive that elevates this above the basic story of an activist: it becomes an epic tale of how she brought up her family at the same time, and the creation of half a dozen smart and articulate young men. (You could argue that the main thing she's taught them is how public image is everything: an early sequence when she suddenly turns on her 'TV voice' for an advert for her car dealership shows that she's well aware of the power of how you present yourself.)

Fox is the sort of subject who would be an absolute dream for any documentarian, even before she presented them with over a hundred hours of archive material. Her focus and determination throughout are extraordinary: a key motif recurring throughout the film is her waiting in silence for agonisingly long periods of time, waiting for someone to talk to her on the phone, maintaining her patience and poise throughout. (She only explodes once in the film, and when she does you'll know you've been exploded at.) Shot in black and white, switching seamlessly between glossy contemporary footage and Fox's fuzzy videos, it's a fascinating portrait of how one black woman's done everything she can to make a difference to the world. 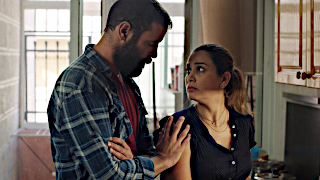 The final film of the day, and we're back to the borders. The BBG and I have been guzzling all manner of online content since the world got shut down back in March - a lot of it's been written about on here, but some of it hasn't. One of the things I haven't mentioned was a recent stream of Mark Thomas' Walking The Wall, a show we originally saw in Edinburgh back in 2011. In that show, he told the story of how he walked the 750km length of the wall between Israel and Palestine for a giggle, as well as to chat to people along the way. A lot of those people seemed to be Palestinian construction workers, who had to sneak across the border every day just to earn a living on Israeli building sites.

With that show fresh in our minds, you can see why 200 Meters felt like a film we should see. Mustafa (Ali Suliman) is in a rotten situation: his wife and kids are in Israel, while he's living in Palestine with his mum. Their houses are literally 200 metres apart (to use the proper spelling, Americans): but as there's that bloody wall in between them, and Mustafa currently doesn't have a full set of papers, it might as well be a thousand times that distance. When his son goes into an Israeli hospital for emergency surgery, Mustafa needs to get across the border fast: the only option open to him is to pay a ludicrous amount of money to a people smuggler, and travel the long way round.

Like Mark Thomas' show, Ameen Nayfeh's film concentrates on the small personal stories arising from the division between Israel and Palestine - the many reasons why people need to cross the border, and the many strategies they use to do it. It doesn't need to ramp up the conflicts to show this: it just shows people trying to get by, and sometimes getting in the way of others as they do so. Nayfeh's helped by a lovely performance by Ali Suliman in the lead, an everyman type whose decency and desire to do the right thing make him the perfect centre for this story. (Getting back to British comedians, Suliman looks a lot like Dave Gorman to me, which is ironic given that a few years ago everyone was insisting Gorman was Jewish.) And as Liverpool reportedly hovers on the brink of being cut off from the rest of the UK with another lockdown, the city can take comfort in this film's assertion that love for Mo Salah has become an international language.