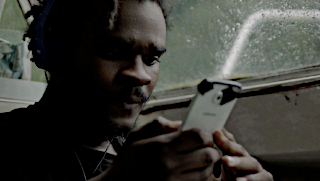 It's the final day of the 2020 London Film Festival, and there are no new films left. No, really. The BFI Player is only showing movies that have been put up there in the last couple of days and are still inside their 72 hour window: as for the cinemas, today's a day for overflow screenings of films that have already premiered here. When they said yesterday that Ammonite was the closing film, they meant it. But it's not our closing film.

And neither is this. African Apocalypse is a documentary about colonialism, via Joseph Conrad's Heart Of Darkness. The central character of the novel is Kurtz, an ivory trader who's taken control of an area of the Congo through a campaign of violence and terror. (The loose movie adaptation of the story is hinted at by the title of this film.) At the time Conrad first published the story in 1899, there were many Europeans running riot throughout Africa in a similar fashion. Over a century later, Femi Nylander, of Nigerian descent and living in Britain, follows the route through Niger taken by one of the most notorious of those Europeans - French captain Paul Voulet - and meets some of the descendants of his victims.

Director Rob Lemkin came up with the original idea, and brought on Nylander as a collaborator - nevertheless, Femi is the public face of the film, and he's put his own personal stamp on the story. It's very much a documentary about his reaction to the stories of what Voulet did. Having said that, one of the most surprising moments comes when he's told off by his local guides for effectively not looking sad enough when he hears these stories, as if he's treating them as academic research rather than having a more visceral reaction. Perhaps to compensate for this, Nylander's imagined correspondence with Voulet in voiceover has plenty of emotion in it. At the same time, he makes sure that we never forget that this wasn't an isolated case: Conrad wrote his novel because at the beginning of the 20th century, all of the major European nations were carving up Africa between them, and they all have murky stories in their past that never make it onto the history syllabus.

The film isn't all gloom and doom: we also get to see how Niger, despite being one of the poorest nations on earth, is leading the way in technologies like solar power. And a smart coda brings the story right up to the present day, addressing the current state of the world in a way that no other film in this festival has done. It's a powerful, important piece of work, which will probably turn up on the BBC's Arena slot at some point in the future, but should be seen theatrically if you get the chance. 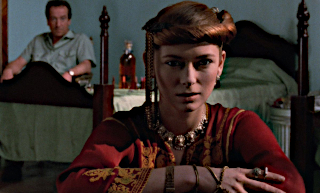 The BBG has been having a jolly old time singing that to herself over the past few days. Myself, I've been more preoccupied by the knowledge that once again, the Treasures archive section is presenting a restoration of a film that I can remember from when it first came out in cinemas. Although I've never actually seen it, which is surprising: by 1987 I was firmly in my Peter Greenaway fanboy phase, so austere BFI-funded pseudo sci-fi would have been right up my alley. Still, at least I can see it now in a fancy new 4K remaster.

We're in Jordan in 1970, in the middle of Black September, and Sullivan (Bill Paterson) is a British journalist covering the story and trying not to get killed. He finds himself helping out Friendship (Tilda Swinton), a mysterious young woman who claims to have lost all her papers and luggage in the few hours she's been in the country. Sullivan doesn't believe this story for one minute, and Friendship eventually has to come clean: she's actually a robot from another planet sent as an envoy to make peace with earth.

There's a whole programme of supporting talks in the LFF this year about Peter Wollen, for whom this was the only feature film as writer and director. He's best known as a film theorist, so it's all the more surprising that this feels more like theatre than cinema. Until we get into the last five minutes - and the main thought I had about those were 'why does nobody talk about fractals any more?' - it's shot like a stage play on a series of basic sets, with Friendship's quick-changing wardrobe the only thing that couldn't be easily replicated theatrically.

Anyone who ever sat though a BFI-funded film in the 1980s could make a few easy assumptions about Friendship's Death: it will be incredibly wordy and cerebral, and have no jokes. They'd be wrong, though. Yes, there are some big ideas on offer, but there's also a dry wit to Wollen's script: whether it's Sullivan's world-weary take on life, or Friendship's bewilderment at televised soccer. "Surely the ball's the least interesting part of the game..." Some bits have dated, sure: the pro-Palestinian subtext is as unsubtle here as it was in most other left-wing drama of the period. But in the end, it's the twin lead performances that make this work, as well as the tension between them: Paterson keeps the dialogue grounded in reality, while Swinton and her utterly unplaceable accent send it somewhere into space.

In the post-film Q&A, Swinton tries to suggest that nobody else was making films about self-replicating AI in the 1980s, a point of view that somehow ignores the existence of The Terminator. This is a very different film from that one, but it's surprisingly entertaining in its own delightful way. 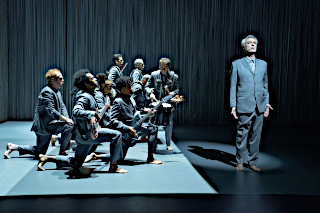 For our real closing film, we return one last time to Cine Lumiere, with their ushers who assume that you'll understand your seat number when they say it to you in French, and their appellation contrôlée hand sanitiser, and - perhaps most importantly - their clear and well-organised Covid safety policy. I'd kiss them on both cheeks for it but, well, you know.

Plus, this seemed like a sure-fire bet as a great way to wrap up a festival - Spike Lee's film of David Byrne's most recent stage show, which was in the middle of a Broadway run when the hammer came down in New York in March. You've heard about yesterday's Screen Talk with Byrne, so you know the headline details: twelve performers, all working with hand-held instruments allowing them to roam freely around the stage, playing songs from the album American Utopia and other classics from Talking Heads and Byrne's solo career, all while trying to make people forget briefly that Stop Making Sense also exists.

Jonathan Demme's job when making Sense, widely regarded as the pinnacle of live concert films, seemed to be to keep out of the way of Talking Heads: simply shoot what they did, and present it without any gratuitous flourishes. Spike Lee isn't that sort of director. As if to compensate for the bare-bones staging of Byrne's show, he has cameras shooting it from every possible angle, including a magnificent view from directly above the performers: he even manages to come up with a justification for a Dutch angle, pulling it out at precisely the point that the entire cast runs from one side of the stage to the other. His most direct intervention into the source material comes towards the end, a simple touch that adds even more power to Byrne's incendiary cover of Janelle Monae's Hell You Talmbout - a song that sadly includes a postscript pointing out what's happened since it was originally filmed earlier this year.

American Utopia may be filmed in a different style from Stop Making Sense, but the two shows have a similar structure. They both start with Byrne on his own, gradually accumulating more musicians with each song, until there's a point - in Sense it's Found A Job, here it's I Zimbra - where there's almost an audible click as the musicians suddenly become a band, and everything just runs on rails from that point up to the end. Utopia's big difference is that it has more of a social conscience it wears proudly on its sleeve, which requires Byrne to talk directly to the audience on a number of occasions. These interludes are fun, but you sometimes feel there's a lack of sincerity there - maybe he's just the real-world equivalent of that character Rob Newman used to do, who could only speak in a sarcastic voice. But if you get past the tone, the things Byrne's saying genuinely add to the show's overall theme, which is coincidentally the same as Nomadland's: people working together can do good stuff.

The big finish of American Utopia is a hilariously hokey bit of Broadway business, but dammit, it works: by the end, you're left wishing you'd been in that theatre on that night. But in these circumstances, being in a French cinema in London feels perfect enough. As far as the LFF goes, we're done here. 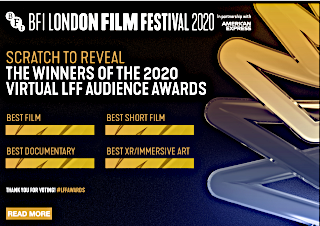 Well, we're almost done here. In previous years, a fancy celebrity jury would have watched a dozen or so of the top films, picked a winner, and announced it at a secret ceremony that none of us would have been invited to. This year, the audience got to vote online at the end of every film (though I had some qualms about the process myself), with the results to be announced in a ceremony to be broadcast on YouTube.

The 40 minute awards show is notable for two things. Firstly, it manages to namecheck literally every film showing this year, as it leads into the announcement of which one is best. And secondly, there's a montage in the middle highlighting the most popular films, accompanied by tweets about them from audience members. Earlier in the week, I got a message from the BFI suggesting they might want to use my tweet with the picture of my customised VR goggles, and would I mind if they did? I gave them permission, but they didn't use it on the night after all. So it's official: that Google Cardboard headset was a waste of three quid. (Actually, six quid, because I bought one for The BBG as well.)

There are four audience awards this year - best film, best documentary, best short film and best immersive art - plus a bursary that's entirely out of our control. You can find out the results of the vote in the YouTube video linked to above, or just read the press release if you're lazy. Some of the winners I highly approve of, some of them I'm just indifferent to. But which is which? Well, come back here in a few days and I'll tell you my final thoughts on LFF 2020 in The Wrap Party.