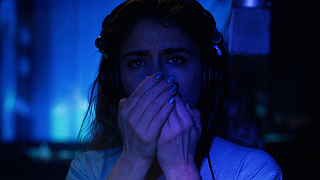 The LFF's surprisingly limited this year when it comes to Japanese cinema. Apart from the bit of Kore-eda directed telly we saw at the weekend, the closest we're going to get may well be the grungey sex 'n' gore flicks that play a surprisingly large part in this Argentinian movie.

Inés (Érica Rivas) has a regular job redubbing Japanese trash for the local market, and sings in a choir in her spare time. The one downside in her life is her boyfriend Leopoldo (Daniel Hendler), who is a dick: from the moment we see them going off on holiday together, we suspect something bad's going to happen. Something does, and Inés goes into a downward spiral from there: her dreams get even more nightmarish than usual, her singing voice is shot to hell, and she causes electrical interference in dubbing studios. Is there a coherent explanation for all this? Well, sort of.

Natalia Meta's film is described in the programme notes as a 'genre-bender', which these days tends to be shorthand for 'at some point this is going to go off the rails completely, and it'll be your call as to how you feel about that.' For myself, I think I'm okay with it. Meta's completely in control of the tone and atmosphere throughout, starting in a realistic register and dialling up the crazy as slowly as she can, leaving it till at least the halfway point before she brings on a mad-haired old woman who explains the idea behind the title.

From that point onwards, it starts getting sillier and sillier, but never loses you completely. It's partly down to that initial grounding in reality, and also because of Érica Rivas' empathetic work in the leading role. For a film festival audience, having it set with one foot in the movie business isn't going to hurt: we get to see some of the tricks of the trade of Inés' day job, and it's a clever touch to have a major chunk of exposition delivered during a recording session of background chatter. And it all wraps up with a smartly staged musical number that The BBG insists will be her earworm of the day, at least until I remind her about that rabies song from yesterday. 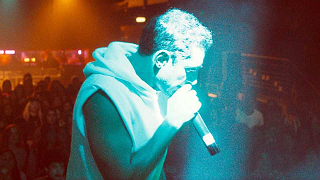 Off to BFI Southbank again for a cheap afternoon matinee, just like I regularly used to do for the 31 years before this one. It's the first half of a self-curated double bill featuring Riz Ahmed, who not only stars in Mogul Mowgli but co-wrote it with director Bassam Tariq. It feels like a very personal piece for the actor: when we get a flashback sequence featuring home movies from a couple of decades ago, it looks to me like we're watching actual film of Riz as a kid. It's the ears that give it away, I think.

Ahmed plays Zed, known to his parents as Zaheer: he's a British-Pakistani rapper who's starting to get a bit of success. He's just landed a support slot on a major tour, though his dad, as ever, isn't impressed: "do people ever remember who the first act is?" But with the tour just a week away, Zed is hospitalised with a degenerative disease, and the possibility that he might never recover. What follows is a long dark unspecified time period of the soul, where Zed is forced to reflect on where he's come from, who he is and what he wants to be.

It's frustrating just how close Mogul Mowgli is to being really great. Its visuals are imaginative and free-associative, its ideas on race and identity are big and chewy, and the performances - from Ahmed downwards - are all excellent. But there's a sense of constraint throughout the film, of things being hemmed in and not given the chance to grow, as symbolised by the tight 4:3 aspect ratio that the action is squished into. The same applies to the story, which feels bigger than the ninety minutes allocated to it - we seem to reach the climax much sooner than we'd expect to. I'm normally in favour of movies that manage to wrap things up within an hour and a half, but this particular one feels a bit rushed, and some more room to breathe wouldn't have done this any harm at all. 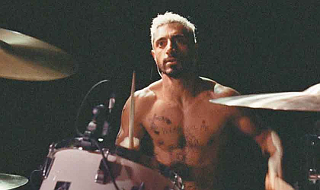 Mogul Mowgli is immediately followed by the second part of our Riz Ahmed double, because we can. Obviously, the Screen Talks are a very different animal this year - far from being the prestige events that everyone's fighting to get into, they're now livestreams that anyone can watch for free on YouTube. Ahmed actually had his chat with Kaleem Aftab last Sunday, but because it's on YouTube rather than the time-limited BFI Player we could watch it any time we liked, so we've chosen to see it straight after the film it's tied in to. To be honest, you don't really need my synopsis of what was said, because the link to the whole thing is right up there. But here goes anyway.

Aftab takes the traditional chronological approach to these things, starting with Ahmed's childhood and working forwards from there. He was attracted to the worlds of music and film from an early age, in both cases from sources outside of his rather traditional parents: his elder brother's collection of hip-hop records, and his uncles' habit of showing him films he was far too young to see. At the time, there weren't that many role models out there for a young British-Pakistani kid wanting to work in the arts. But when he was at university, he was scouted by the National Student Drama Festival, and he ended up hanging out with a new group of people for whom drama was their life, bringing with them the revelation that "you could just do this all the time." That university was Oxford, and he's well aware - not to mention apologetic - that his was a position of privilege that isn't open to everyone.

After drama school, it all came together in a bit of a rush. His first movie, Michael Winterbottom's Road To Guantanamo, introduced him to both the film set and the wider world beyond it. He won an award for it at the Berlin festival, but on his way back from there he was detained by UK immigration for the usual reasons. It inspired him to record Post 9/11 Blues, the record that kickstarted his parallel musical career as Riz MC. He continued to make movies in the UK, getting lucky with good directors such as Chris Morris: although he was initially worried about taking on Four Lions, thinking "this is like fatwa, mate."

This leads into an interesting discussion regarding Ahmed's thoughts on representation. As he sees it, he spent the early part of his career playing racial stereotypes, then playing roles like the one in Four Lions which subverted those stereotypes. He then sees the third stage as moving on to characters that aren't defined by the actor's race - stretching the culture by playing roles that people like him wouldn't have been given in the past. It explains why his career came to a bit of a standstill in the UK, where he feels there's "a short ladder for people of colour" which stopped him from hitting that third stage: "I needed to get out of the politics column and into the arts column." Like many others before him (he namechecks 'Idris' as one of the people who gave him advice), he went to the US and effectively started his career all over again.

These days, his approach to representation is that it should be about unapologetically presenting your personal experience: not about reconnecting to a place, but to people. This year, he's doing that with a pair of films that mix his twin passions of music and acting: as well as the aforementioned Mogul Mowgli, he's also playing a heavy metal drummer in Sound Of Metal. In both cases he related to their central character, a control freak who suddenly discovers he can't control everything and has to reassess his life  - a bit like the pandemic has forced us all to do, coincidentally. Mogul Mowgli is obviously the more personal project of the two for him, but even then it seems to have been a close collaboration with director Bassam Tariq - the director tried to make it more esoteric and mystic, while Ahmed tried to make it more comical and clear, and he's happy with the way the film balances the two. "Make our identity from the old and the new," as he sums it up right at the end of a smart and articulate session. 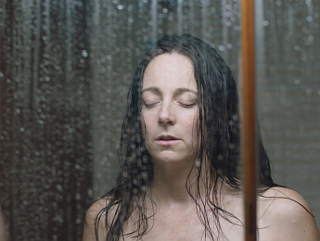 We don't deliberately programme these things thematically, but there turn out to be several odd links between A Common Crime and the other films we've seen today. This one's another subjective view from inside the protagonist's head, watching their connection to reality become increasingly tenuous. It's also our third film today to come in at around the 90 minute mark, though it's The Intruder that makes the best use of its truncated running time. Like The Intruder, it's from Argentina. And like Mogul Mowgli, it's inexplicably shot in 4:3. To be fair, the aspect ratio here isn't as distracting as it was earlier today, but I'd imagine the manufacturers of widescreen tellies would be keen to have a word.

A Common Crime is a bit more obviously Argentinan than The Intruder, in that it acknowledges some of the murkier political aspects of the country. It's the story of college lecturer Cecilia (Elisa Carricajo), a single parent bringing up a son with the help of housekeeper Nebe (Mecha Martinez). When Nebe's own son is taken in by the police, and later turns up dead in a river, it's a traumatic time for Cecilia's household. Particularly Cecilia, who knows a bit more about the boy's disappearance than she's letting on.

It seems a bit iffy to be using the known brutality of the Argentinian state as the starting point for a woman-on-the-edge thriller. Especially one like this, which despite its short running time takes an absolute age to set up its moral dilemma, and fails to generate any sort of tension or drama in its first half. Happily, once we've got past that point, director Francisco Márquez starts making things more interesting, with good use of creepy details in the sound design and a finely disintegrating performance by Elisa Carricajo. As with The Intruder, there's a satisfying degree of ambiguity as to what genre of film we're watching: is Cecilia at physical risk here, or is it all in her head? It's capped off with a particularly neat final scene, giving us a jolt of catharsis while making it quite clear that nobody in the film has earned it.