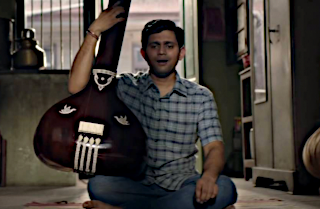 As has been the case since, ooh, 2009, the first film you'll be reading about here is not going to be the Opening Gala. I'm sure Steve McQueen's Mangrove is a fine piece of work, but it's going to be on telly soon enough, and I'm happy to wait until then to see it. So while others are watching Mangrove in cinemas across the UK, we're at home discovering how this whole online screening business is going to work.

If our experience with The Disciple is anything to go by, it should work pretty well. The film has its own dedicated page on the BFI Player, which also includes links to a short intro to be watched before it, and a 20 minute Q&A to watch afterwards. Having the links located alongside the film is a step up from what Sheffield Doc/Fest did with their online bonus material, which was all lumped together on one page - and if every movie at this festival is going to come with this level of supplementary content, it'll be rather impressive. The film itself plays well online, albeit with a couple of buffering hiccups (hopefully that won't be a regular thing), and a discreet anti-piracy watermark appearing every 20 minutes (although it can't be that discreet if I know it came every 20 minutes).

Let's talk about the film, then. Writer/director Chaitanya Tamhane tells the story of Sharad Nerulkar (Aditya Modak), a musician studying Indian classical singing under the tutelage of his Guruji (Arun Dravid). Through flashbacks, we see Sharad's introduction to the music from his father, and the strong influence of his father's own guru - an obscure female singer whose main legacy was a series of recorded lectures about what it takes to be a successful vocalist. Over a period of several decades, we see how Sharad draws on all these father (and mother) figures to work out what he wants to do with his own life.

In his introduction, Tamhane says that you don't need to know much about Indian classical music to enjoy the story. In one sense, being unfamiliar with the music could be considered a problem - there are a lot of scenes involving performances, and you can't tell whether what you're hearing is good or bad until you see how the people on screen are reacting to it. (On the day that we learned about the death of Eddie Van Halen, it's amusing to find out that what Indian classical audiences appear to enjoy most are huge squiggly clusters of notes performed at ludicrous speed: Guruji's speciality sounds like the vocal equivalent of guitar shredding.) But in another sense, not knowing much about the music makes the film work better dramatically, as it's more of a surprise when you find out where the story is really heading.

In a way, lots of aspects of The Disciple seem to be inspired by the structure of Indian raag music. It's a form that moves slowly and takes its own sweet time to reveal what it's trying to say. That's certainly the case here with the structure of the story, as well as the photography: one of Tamhane's favourite tricks is to set the camera way back in a static wide shot, and let the viewer work out for themselves what they're meant to be looking at. (Having said that, the amount of detail in some of those shots does make you wish you were watching this on a cinema screen.) Another recurring visual motif is a series of long shots of Sharad riding his motorbike through the unnaturally quiet streets of nighttime Mumbai, listening to recordings of his father's guru - these almost work like a musical refrain, and you feel a little burst of delight when you see another one of them approaching. And like a raag, the film comes to a satisfying conclusion without feeling the need to indulge in a big showy climax. As starts to a festival go, this counts as a decent one.