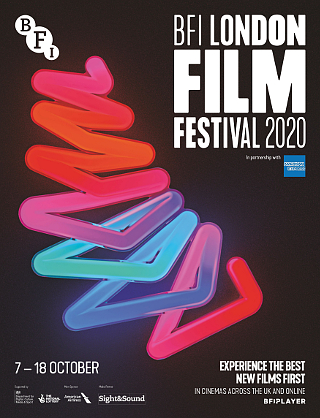 As is also traditional, this is the place where The Belated Birthday Girl and I look back on the festival just passed, and pick out our highlights and lowlights (even though the festival finished nearly three weeks ago now, and a few of the films have already been released in the UK). So: her first. The usual disclaimer applies - her roundup and mine were written independently while sitting at opposite ends of the sofa, and any overlap between the two is just down to the way we are. 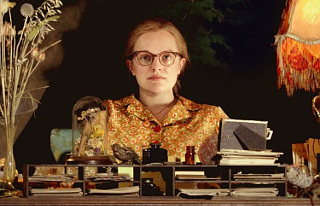 Top 5:
1. Another Round
2. Shirley
3. The Painter And The Thief
4. David Byrne's American Utopia
5. Wolfwalkers

Bubbling Under: The Reason I Jump, 200 Meters, Time, The Intruder, One Man And His Shoes, Possessor, Shadow Country, African Apocalypse

Not for me:
• Ammonite
• Delia Derbyshire: The Myths and The Legendary Tapes
• Sound For The Future

A grand total of 8 films in cinemas (plus a trip to the Blue Room to try out the LFF Expanded VR), and 26 online features, plus shorts and 3 screen talks, makes this the busiest LFF for some years. In the circumstances, I think the BFI made a very good job of running this year’s festival: it can’t have been easy negotiating all the different contracts for the combination of what was in cinemas, what would be online, with what period of availability, and what would be both. I am really glad that we managed to get to 8 films in cinemas, 3 of which made it into my Top 5, and only 1 of which is mentioned here for less positive reasons. The online experience was very good, though, particularly with the effort made to get intros for every film, and Q&As for all but one that we saw (and technically A Day Off Of Kasumi Arimura was a TV show rather than a feature film, so we could say for all of them). We all hope, of course, that the BFI don’t have to do this sort of thing ever again, but if they do, then I don’t think anyone could do it much better.

Moving on to what we actually saw. A pretty strong year, with a very solid Top 4, and a good “bubbling under” list that made it hard to pick 5th place. I have to admit some ambivalence in choosing to see Another Round in the first place, and that probably Mads was the main attraction, as I had a bit of a prejudice against Tomas Vinterberg because of Festen and the whole Dogme 95 thing. But I am so glad that I gave it a shot, because it turned out to be the best thing I saw. And also, so glad we went to a cinema for it and got to enjoy it with an audience (albeit a reduced and socially distanced one). And in fact the filmed intro and Q&A (which we managed to watch at home afterwards) really removed any lingering prejudice about Vinterberg: he and Mads Mikkelsen were an absolute delight to watch.

Shirley was a terrific film with very strong performances and a great story, proper entertainment. The Painter And The Thief was the best of a very good selection of documentaries that we saw, with an amazing story, and constructed so well that we had to check it wasn’t actually a reconstruction: see if it you can – it’s currently still available to stream, as I write. I went to David Byrne’s American Utopia confident in expectation of a great fun last night’s film, just for the music, but didn’t expect to be so emotionally involved and moved by it. And finally, I gave that last place in the Top 5 to Wolfwalkers, a beautifully animated tale, with a story and characters that really draw you in (pun intended).

Briefly to mention the few things I’ve called out on the down side. Ammonite was the only film that actually made me annoyed, because I went in there hoping to be told some interesting things about a woman who had an amazing story - a working class woman who made some momentous scientific discoveries in her field, and had to battle against prejudice because of her class and her sex – and I really would have liked to learn something about that. Instead we had an entirely fictitious and gratuitous film about her imagined sex life. The director has said people wouldn’t have made a fuss if the film had speculated that she was straight and made a film about that. Well, I cannot speak for anyone else, but for me personally I would have been equally as annoyed by a film that invented a heterosexual relationship and showed us sex scenes from that. Women are too often represented solely in terms of sex and their relationships, when there is so much more interesting about them. Delia Derbyshire was another woman with a lot interesting about her, who left an incredible archive, and I had hoped the film would be presenting us with that material. Unfortunately once again the film preferred speculation with reconstruction rather than presenting the archive, and poorly done reconstruction, at that. Sound For The Future was a bit too post-modernist in its approach for my taste, and although there were some interesting aspects to it, overall it just didn’t quite work for me.

To wrap up, I think congratulations to Tricia Tuttle and her whole team for pulling off such a good festival experience in such awful circumstances. And a big thanks to all the filmmakers who gave their time for the intros and Q&As that gave us experiences we couldn’t possibly have got from a regular festival. Let’s hope the world has sorted itself out a bit better by next year in terms of how to live with this bloody virus, because however good they make the at-home online experience, it can never replace seeing films in cinemas again on big screens with audiences. 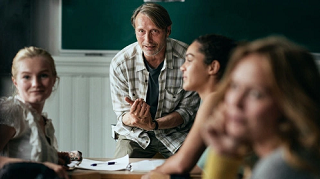 I don't know about you, but since March I've been living my life in two-weekly cycles of minor dread. Whenever I've had to leave the house to go out somewhere, I wait for the mandated 14 day period afterwards so that I can say at the end of it, "well, at least I didn't catch Covid that time." So, nearly three weeks after the end of the London Film Festival, this is the big success to report: neither The BBG nor I caught it that time, despite visits to three cinemas (BFI Southbank, Cine Lumiere and Prince Charles), seven restaurants (Wahaca, Strada, BFI Bar and Kitchen, Azzurro, Bosporus, Tapas Brindisa and Ceru), one cafe (Cafe Tangerine), one bar (Waterloo Tap) and a virtual reality salon (BFI Southbank again). Thanks to all of the above establishments for not killing us: I know all of you are closed right now, but we'll be happy to come back when you're not.

But, probably just as important as me not coughing my guts up, I can also report that the films were pretty good too. For me, the standout was Another Round, which made me realise that I've been avoiding Tomas Vinterberg's films for seventeen years now and probably shouldn't have been. It's possible that part of my response to it may come from the (still comparatively rare) experience of seeing a film in a cinema at this point in history, and feeding off the reactions of the total strangers sitting around me. It's a proper audience pleaser of a film, and it's a shame that thanks to the second lockdown (as predicted here), the original plan that English audiences would be able to see it from November 27th is no longer a viable one. As soon as they open up the movie houses again and let Another Round into them, you should see it - and quick, before the third lockdown kicks in.

Two of the other films in my top five were also seen in a cinema. Again, the shared experience of watching with an audience helped to enhance the basic human decency of Nomadland, and the sheer sense of life coursing through David Byrne's American Utopia. But of course, this was the year that the bulk of the LFF took place online, and it has to be said that worked brilliantly. The huge amount of effort put into the streaming presentations - with introductions and Q&A sessions topping and tailing every film - made this feel like an event, rather than a twelve day Netflix binge. Coincidentally, the two best films I saw online were both documentaries with a solid emotional core to them: The Painter And The Thief (now streaming) and The Reason I Jump. There are quite a few other films that just missed out on a top five place, notably Time (streaming on Amazon Prime), One Man And His Shoes (streaming on Curzon Home Cinema and elsewhere, with a telly screening planned later this month), After Love, Shadow Country and my favourite archive restoration of the year, Friendship's Death.

What was bad, then? Well, just one thing, really: Siberia was as much of a could-be-great-could-be-shit risk as any other Abel Ferrara movie, and it's just a shame that it ended up on the debit side of the ledger. Beyond that, there are a few other films that I'd class as disappointments simply because they didn't live up to expectations, notably Ammonite, Delia Derbyshire: The Myths and The Legendary Tapes and Mogul Mowgli. The latter is probably the one I had the highest hopes for, and I'm almost tempted to watch it again to see if its pacing works better for me second time around. (Thanks to the lockdown truncating its theatrical run, it's already available for streaming, so it'd be easy enough to do.)

Things being what they are, the chances of interacting with other human beings during this festival were virtually zero. So let's keep the acknowledgements short and sweet this year: thanks to The Belated Birthday Girl for allowing me to share the double seats at NFT1 with her, to the Pals, to the FU posse, and to Tricia Tuttle and her team for somehow pulling this festival off in ridiculous circumstances. I'm not going to make any attempt to guess how 2021's LFF is going to play out, but just a quick note to Tricia: I'd appreciate some sort of acknowledgement next time if you're going to nick my marketing ideas from these pages, such as the LFF logo facemask. Being a monkey, and all.