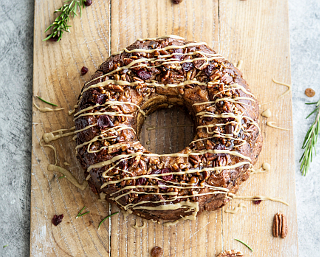 Comedy: November, predictably, has seen us all locked back in our homes looking for online things to do. Well, I say all: Daniel Kitson, equally predictably, had other ideas. Dot. Dot. Dot. is another one of those Kitson shows built around a slightly ludicrous set of constraints: for the whole of November he toured theatres around the country, performing nightly to empty auditoriums, and broadcasting the results in a series of pay-per-view livestreams where the maximum number of attendees was capped at the capacity of the theatre he was in on that day. It'll come as no surprise that this is a show specifically about the pickle we currently find ourselves in: over the course of 90 minutes, armed only with a huge collection of Post-It notes, Kitson tells a series of stories about how he coped during the first six months of the pandemic. It helps that he's found himself in many of the same situations that we have, though it's slightly distracting that most of his friends are people from the comedy circuit you end up trying to guess from first name references. ("I met up with my old friend Ivor... I haven't known him for that long, he's in his late 60s.") It's a lovely souvenir of a peculiar half-year, and you've missed all the performances on the tour (including a sold-out one at the Union Chapel tonight): hopefully he'll find some way of doing something else with the show, as it deserves to have a wider audience than the usual Kitsonheads.

Food & Drink: Regular readers will know that there are regularly occurring milestones in this site's year, and the one for November is usually Collabfest - the annual binge in which 80-odd BrewDog bars each get together with a local brewer to make a beer, and then as many of those beers as possible are released into all the bars over a single weekend. You'd think that all the bars in England being shut this month would have put a crimp in that plan, but you'd be ignoring the tenacity of BrewDog's management and staff: over a period of five days, they took the kegged Collabfest beers, filled 30,000 cans with them, and sold them all to punters via mail order. The kegs left over were sent to the various bars, who canned them up on demand for delivery to home drinkers by courier. So over Collabfest weekend The Belated Birthday Girl and I sampled 20 beers, and as usual drunkenly documented them on Moblog as we went: follow the links to read about the collaborations with the bars in (deep breath) Brighton, Manchester, Tallinn, Castlegate, Tower Hill, Shepherd's Bush, Brussels, Glasgow, Newcastle, Southampton, Sheffield, Dublin, Nice, Seven Dials, Lothian Road, Old Street, Carlisle, Le Marais, Sodermalm and Swansea. (I'd also recommend that you take a look at the Collabfest online beer tasting, which is possibly the best attempt I've seen at doing one of these things virtually.) We might fit in a few more yet, as there's still some beer left in those kegs in the bars, and they're still delivering. But twenty should do for now, I think.

Music: Let's define 'lockdown gig' as meaning 'a live musical performance filmed in an empty auditorium for subsequent transmission across the internet.' That way, the sweeping statement I'm about to make doesn't need to include Grace Petrie, whose livestream from her house in aid of Bush Hall was the most blissfully energetic online show I've seen this year. Put that aside, and there are three lockdown gigs that have made 2020 that bit more bearable. Nick Cave's Idiot Prayer, featuring him, a piano and nobody else in the middle of a deserted Alexandra Palace: Jarv Is... Live From The Centre Of The Earth, with Cocker and co performing his album from inside a beautifully lit cave: and now, Roisin Murphy's Roisin Machine, a one-off show presented via Mixcloud this month. If Nick and Jarvis were aiming for stylish minimalism in their staging, Roisin has gone completely in the opposite direction: occupying a giant warehouse, her set includes multiple costume changes, massive video screens, a dancer and an excellent four-piece live band. She's a full-on disco diva these days, and the set covers her whole range from a percussion-only version of Jealousy to a surprisingly effective acoustic reworking of Moloko classic Familiar Feeling. Unlike Cave and Cocker, who were planning brief cinema releases of their shows in November before the shit hit the fan again, Murphy has no plans to make this one available in any other form following its one-day-only transmission - "it is what it is," she says - so it's simultaneously disappointing and useful that this link was still working at the time of writing.

In the meantime, your Simian Substitute Site for December 2020 is Christmas Monkey Bread, or at least a recipe for it. Well, it's nearly Christmas, and breadmaking has been a common feature of many people's lockdown, and there's monkeys in it. Or something. Yes, I know that it's on the website of an appliance manufacturer, and the words 'Miele Steam Combination Oven' appear far too many times in the recipe for comfort, but you've got three and a bit weeks to come up with some sort of workaround replacement for the hardware. I'm sure you'll manage.

I was talking earlier on about the regularly occurring milestones in this site's year, and long-term readers will already know what the milestone for December is going to be. So this month you can expect that, plus a few looks back at how that milestone went in the previous 38 years. It's largely going to be recycling of pre-existing content, sure, but after a year like this one what else are you going to do? Let me know in the comments box below if you've got any better ideas...