Spotify Picks Of The Year: The Eighties 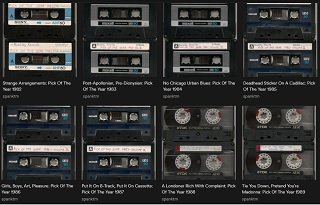 Did I imagine at the time that NEARLY FORTY YEARS LATER, I'd still be making these compilations? Probably not. Still, here we are. Long-time readers may remember that around the 35th anniversary of those first tapes, I copied all of my Picks Of The Year to date onto a new medium: streaming Spotify playlists. Over the next few weeks, I'll be reposting those lists up here, decade by decade.

Why am I reposting a series of pages I first published here in 2017? Well, three reasons. First of all, Spotify have completely changed the HTML embed code for their playlists, so the pages needed updating to include that anyway. Secondly, I can finally complete the page dedicated to playlists for the Tenties, to include the lists for 2018 and 2019. And thirdly, the world of streaming is a ridiculously fluid one, if you’ll pardon the pun. Tracks that were missing from the playlists three years ago are now available: but also, tracks that were available three years ago have now been withdrawn by the artists and/or record companies. The latter is a particular bugbear of mine, and is why I keep yelling at young people in the street that physical media will never die.

So these pages will never be definitively completed: much the same as their YouTube equivalents, the Spotify playlists are always going to have holes in them, and those holes will change every so often. But I'll highlight what the missing tracks are currently for each year, and there'll be links to the full track listing and description as well. So with that caveat in mind, welcome to my favourite songs of the Eighties, with the other decades to follow shortly. Don't judge me.

1982: Strange Arrangements.
There are a few completely unavailable tracks here, from Graham Parker, Moving Hearts and Not The Nine O'Clock News. The latter is particularly frustrating because in 2019, all the NTNOCN albums were re-released in a lovely box set on vinyl and CD, with no digital equivalent whatsoever. Meanwhile, the version of The Look Of Love isn't the deranged 12" remix assembled by an early incarnation of The Art Of Noise: I’ve had to make do with the original 7" single.

1983: Post-Apollonian, Pre-Dionysian.
The most regrettable absence is Cruella de Ville's Gypsy Girl, because that's where the title comes from. Also unavailable are Moving Hearts, with a politically dodgy unreleased song that I'd taped off the telly.

1984: No Chicago Urban Blues.
Missing out on The Flying Lizards, Yip Yip Coyote and a John Peel session from 3 Mustaphas 3.

1985: Deadhead Sticker On A Cadillac.
Gaps on here thanks to the non-Spotification of Godley and Crème’s History Mix mash-up album, and my live bootleg of The Flying Pickets.

1986: Girls, Boys, Art, Pleasure.
Omitting tracks from The Communards (a B-side that was on Spotify a couple of years ago but isn't any more), Rory McLeod, Jerry Dammers, Black Britain and Marianne Faithfull.

1987: Put It On 8-Track, Put It On Cassette.
Big old gaps courtesy of Beastie Boys, The Redskins, Justified Ancients Of Mu Mu and the Trevor Jones/Courtney Pine soundtrack to Angel Heart.

1988: A Londoner Rich With Complaint.
Missing a distinctive twelve-inch single from Stump, remixed to destruction by The Irresistible Force. There are also a couple of compromise substitutions on this list - The Blow Monkeys are represented by a slightly inferior mix of their best single, while Prince’s Anna Stesia is not the live bootleg that I made at one of his 1988 Wembley shows, but a similarish rendition recorded 14 years later. (To be honest, it's the coda of the 1988 version I liked best, which is nothing like the coda of the newer recording.)

1989: Tie You Down, Pretend You're Madonna.
Last one for this decade. Missing obscurities from 3 Mustaphas 3 and Real Sounds Of Africa (both of which have been removed from Spotify in the last three years): but the saddest omission here is De La Soul, as the digital rights for the whole 3 Feet High And Rising album look set to languish in litigation hell till the end of time. Like I said, kids, hold onto your physical media.