Spotify Picks Of The Year: The Nineties 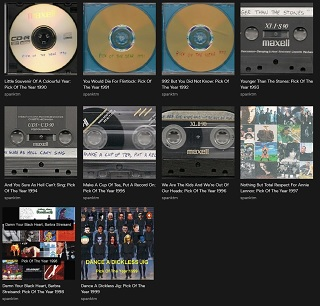 In the second of a four-part series - and it pulled me up short when I realised that before too long, this could become a five-part series - anyway, I'm continuing my decade-by-decade run through my Pick Of The Year compilations, this time presenting the ones from the 1990s as almost completeish Spotify playlists.

There's a major difference between these ten compilations and the previous set from the 1980s. Those earlier ones were purely made for my own benefit. The ones in the nineties, however, fall into three groups. The cassettes I made from 1993 to 1997 were specifically targeted at my mate Lou, following a session in a pub once where he grumbled that he couldn't find any decent new music any more. The CDs burned in 1998 and 1999 were also primarily made for him, but I now also had a website where I could tell the world about these favourite songs, so I was aware that I had an even wider audience. That also applies to the CDs for 1990-1992, the three years when I didn't make compilations at the time, eventually bashing them out nearly two decades after the fact to fill in the gap.

These selections may be a little more self-conscious as a result - not deliberately so, I think, but I'm sure there was some influence in my track selections because of that. There's still plenty of stuff on these lists that I can be embarrassed about now, though, so don't you worry about that. As before, some of the tracks aren't available on Spotify (and some have dropped off it again since I last wrote a version of this page back in 2017), so I've indicated that where appropriate and included links to the original pages discussing the compilations in full. In short: not so much the nineties, more the ja danketies! (One of my favourite Chris Morris gags of the period, there.)

1990: Little Souvenir Of A Colourful Year.
Missing a couple of tracks here, from Hoodlum Priest, Fatima Mansions and Jolene Jowett (the latter's actually Eddi Reader, performing as her character from the TV series Your Cheatin' Heart).

1991: You Would Die For Flintlock.
Just the one absence here: as The Justified Ancients Of Mu Mu (and all their pseudonyms) deleted their entire back catalogue in 1992, none of their work has ever been released in any sort of legitimate digital format.

1992: 992 But You Did Not Know.
Oh, this one's completely full of holes: unavailable tracks from The Adventure Babies, Johnny Marr & Billy Duffy, plus the KLF (see above) mean that this compilation doesn’t quite make it to the one hour mark. Good job that that 18 minute Piano Circus track is on Spotify, that's all I'm saying.

1993: Younger Than The Stones.
Fun fact: on the original CD release of World Party's Bang!, the track Give It All Away comes in two distinct halves with several other tracks in between them, and I was ludicrously proud of the edit I did on my tape to stitch them together. On the digital release, they've already done the edit for you. So you can hear that full version here: but you can't hear tracks by Blur, John Hegley or Pet Shop Boys.

1994: And You Sure As Hell Can't Sing.
Amazingly, everything from this compilation is on Spotify now, thanks to the long-delayed streaming release of Terry Hall's Home album finally happening in 2019.

1995: Make A Cup Of Tea, Put A Record On.
Only one track missing here, Edwyn Collins & Bernard Butler’s lovely rarity from the CD magazine Volume.

1996: We Are The Kids And We're Out Of Our Heads.
Another single gap here, thanks to Goldbug's pearlanddeantastic cover of Whole Lotta Love.

1997: Nothing But Total Respect For Annie Lennox.
And again, just one track missing from the whole ninety minutes: in this case, it's the cover of Love Rollercoaster that Red Hot Chili Peppers recorded for the Beavis & Butthead movie soundtrack.

1998: Damn Your Black Heart, Barbra Streisand.
The year I officially transitioned from cassette to CD, thus reducing the running time of these compilations. And yet somehow, even more tracks from this year can't be found on Spotify: step forward Vic Reeves, Dubstar & Sacha Distel, Noel Gallagher and Vitro & South Park Cast, reducing the running time of the streaming version even further to a pissy 54 minutes.

1999: Dance A Dickless Jig.
It's always a disappointment when I can't find the track that the title of the compilation comes from, and that's the case here with La Resistance (Medley) from the South Park movie soundtrack. Everything else is here, though, so hooray for that.

Man I get really depressed when I think back to 1992/3. Was life better then or was I just younger?

As for the Clash song, they didn't release their first live album until 1999, even though it was all recorded 1978-1982. Of course, it's possible it took them 17 years to fix all the bum notes in a studio...