Spotify Picks Of The Year: The Noughties 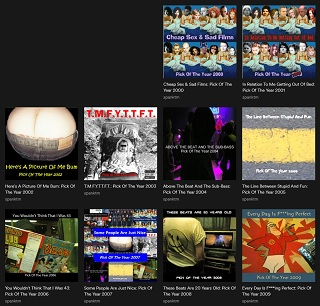 We're now at the halfway mark in this project to recreate all of my Pick Of The Year compilation CDs and cassettes as Spotify playlists - see also 1982-1989 and 1990-1999. And if there's one thing this exercise has taught me so far, it's that anyone who says streaming will eventually completely replace the physical ownership of music deserves a good slap. As you've probably noticed in the previous two articles (as well as the one that's due to follow shortly), most of these playlists are missing at least one song, if not more.

It's particularly noticeable here in the early years of the 21st century, largely thanks to my discovery of J-Pop in 2001. With a lot of Japanese music, it seems like nobody cares about granting the rights to stream it internationally. Things began to loosen up a few years ago, it's true - Ringo Shiina eventually made all of her records globally available, and Kyary Pamyu Pamyu has released everything worldwide from the moment Pon Pon Pon went viral. But all too often, you end up with bizarre situations like the Vanilla Beans collection, VaniBest II, where the iTunes export version was been stripped back from 18 tracks to five, and the Spotify version restricted even further to two.

So there are a few Japanese songs on these compilations that I can't track down on Spotify. In addition to that, this was a decade when I picked up a lot of music in all sorts of contexts outside regular albums - downloads of mashups that were too copyright-infringing to go on regular sale, CDs only available at gigs, even one track given away with a book. None of those are available for streaming, as you can imagine. And most frustrating of all, it's impossible to predict when songs will be removed from Spotify, or indeed added to it. There's at least one track here that wasn't available when I first started assembling these playlists back in 2017, but subsequently showed up a month later because the album it came from had just got a tenth anniversary rerelease. (It's Glamur by Amiina, from 2007.) And that's happened a few times over in the three years since I last wrote about these playlists, either because of changes in rights ownership or because the rival streaming service set up by one particular artist died on its arse.

So, in short: these playlists may have gaps in them, but I'll try to warn you here what's missing, and link to my original track-by-track discussions of the compilations as well.

2000: Cheap Sex & Sad Films.
Just one omission here: Otis Lee Crenshaw's He Almost Looks Like You, which you could only find on a live CD sold at the man's gigs.

2001: In Relation To Me Getting Out Of Bed.
The year of the Hong Kong holiday where I spent most of the flight listening to the J-Pop channel, and most of the holiday trying to track down the records I'd heard there. Sadly, one of the big discoveries I made that way - Tanpopo - aren't available for you to hear on Spotify. It was a similar story with Love Psychedelico three years ago, but someone eventually saw sense and now you can find them on there.

2002: Here's A Picture Of Me Bum.
And when I actually made it out to Japan the following year, it got even worse: so no Morning Musume or Yuki. Also missing: Elvis Costello's best album of the Noughties (When I Was Cruel), a rather good Polyphonic Spree b-side (covering Bowie's Five Years), and Freelance Hellraiser's cheeky mashup of Destiny's Child and Nirvana.

2003: T.M.F.Y.T.T.F.T.
A full house! Frenzal Rhomb have managed to get themselves global distribution since I last looked in 2017, while Paddy McAloon's lovely solo album has been cheekily rebranded as being by Prefab Sprout and re-released.

2005: The Line Between Stupid And Fun.
Here's the one where a missing song came from a book: The R Crumb Handbook, to be precise, which combined an overview of his artwork with a CD of his fun jazz covers. Surprisingly, The Legendary K.O.'s zeitgeisty rewrite of Kanye West into the track George Bush Doesn't Care About Black People has suddenly popped up on streaming.

2006: You Wouldn't Think That I Was 43.
Since the 2017 version of this article, Keito Blow has made it onto Spotify while Lou Rhodes has dropped off it (just her first solo album, though).

2007: Some People Are Just Nice.
A couple of reappearing Japanese tracks to report here (from Ringo Shiina x Neko Saito, and Halfby), with the only remaining absence being MySpace-only noisemakers Yoda's House.

2008: These Beats Are 20 Years Old.
Some useful holes have been plugged here: Dan le Sac vs Scroobius Pip's hidden album track Reading My Dreams is now available for streaming after a decade or more away, as is Byrne and Eno's album Everything That Happens Will Happen Today. Meanwhile, it looks like Kiyoshi Hikawa is obviously way too Japanese for anyone outside of the country to enjoy.  And Dizzee Rascal covering The Ting Tings on Radio 1's Live Lounge made onto one of their CD releases, but nowhere else after that.

2009: Every Day Is F***ing Perfect.
Another full house to end this decade. They Might Be Giants' charming album Here Comes Science eventually made it onto Spotify after all. And Jay-Z originally held back all his tunes from there so that he could keep them on his own streaming service Tidal. How did that work out for him? Oh.