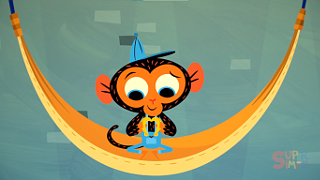 In the meantime, your Simian Substitute Site for February 2021 is Miss Monkey's Valentine's Day Problem, an episode of the web show Mr Monkey, Monkey Mechanic as seen on YouTube channel Super Simple TV. Kids' telly is shite now, isn't it? Not like in my day. Still, that's where we are.

January was a quiet month, I'll admit, but February should perk up a bit with the traditional February thrills of the Japan Foundation Touring Film Programme. And this year, inevitably, it's had to move online, so you can all get involved - especially with the new pricing structure they've come up with, which is that every film costs absolutely nowt (though you still need to book tickets). Visit the official site for details, and then come back here to see what I thought. I know that last year's JFTFP report went up four months late, but this year's should be a bit more timely. Hopefully. Feel free to nag me in the comments box below if it isn't.

(Oh, and in somewhat predictable news: Dave is, once again, the winner of 2020's Christmas Pick Of The Year competition. He realised that the correct answer to the question was Waking Up - a song title that appears on the compilations for both 2020 and 1995, but in this case they're two entirely different songs. Apparently, Dave spent part of Christmas building a structured database of all the POTY song titles to help him solve this puzzle. It'd probably be a bad idea to mention to him that I subsequently released a gigantic Spotify playlist of all the streamable POTY songs that'll do a similar job, so I won't.)

Ah, but, I don't think all the songs are available on Spotify, so that list isn't complete?(he says trying to justify time spent parsing html...)