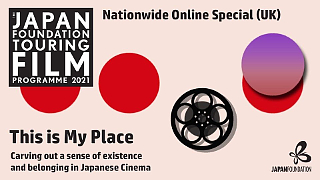 This year's JFTFP - to give it its full title, This is My Place: Carving out a sense of existence and belonging in Japanese Cinema - runs from February 19th to March 10th, and you're all invited. Actually, you were all invited a couple of weeks ago (see throwaway reference towards the bottom of this page), and if you haven't already booked tickets for films by now, then you've almost certainly missed out. Sorry about that. But I didn't, and over the next few weeks I plan to see several of the eighteen films on offer, and review them for you. To start off, let's look at those 18 films, through the medium of 18 trailers. No subtitles for any of these, but you'll get the idea.

First impressions, based on watching that lot back to back? We're looking at some violent mood swings here. Everything seems to be either dramatic and incredibly grim, or comic and incredibly goofy, with very few films not at one or other end of that spectrum. Is it just a consequence of these, as they say, unprecedented times?

On the opening night of JFTFP21, we find out from its organiser Junko Takekawa that the answer is yes - she felt that we needed a bit more fun at the moment. This emerges during the festival's first event, a Zoom discussion entitled The Place Of Japanese Cinema In The UK (which you can watch here). There are a number of discussions being held during the three weeks of the programme, all called The Place Of [something], which makes for some incredibly clunky titles. Most of them are lunchtime affairs, as they're live hookups with Japanese filmmakers and need to take place while Japan is awake. This one is the exception, as all its panel members are based in the UK. Moderator Alex Davidson is a curator at the Barbican: Jennifer Coates is in charge of Japanese studies at Sheffield University: Peter Mumford is a film programmer at Quad in Derby: Ren Scateni is a critic based in Edinburgh: and Junko Takekawa is representing the Japan Foundation itself, as she always does when the event takes place in the real world.  They're covering similar territory to another Japan Foundation event I reported on back in 2012, looking at the current state of Japanese film in the UK.

Effectively, the Japan Foundation programme has become one of the key ways in which new Japanese cinema gets introduced into the UK. As Mumford points out, back in the nineties and noughties the Asia Extreme brand/genre meant that there was a slow but steady stream of genre films that made it over here: these days they've been relegated to specialist video labels and streaming services, and only the likes of Kore-eda are guaranteed theatrical distribution. That's tricky for people like Mumford, who regularly programmes Japanese films in Quad's Satori Screen strand, but is largely limited to anything picked up by a UK distributor, who'll generally look for genre or name recogition and avoid films without an obvious sales hook. Dealing directly with Japanese film companies for one-off screenings is tricky and expensive, which is why the package deals arranged by the Japan Foundation have become a lifeline for UK fans of Japanese cinema.

It's an interesting and wide-ranging discussion. Coates, in her role as an academic, has noted that her students use film as a way to study issues in Japanese society, which has been one of the Japan Foundation's aims in promoting these programmes all along. Scateni suggests that streaming services may already have all the films we need, but you need to train the algorithm properly - the more Japanese content you watch on Netflix, the more you'll have recommended to you. She also recommends Mubi for the latest hits hot from festivals, and Arrow for a wide selection of films not available elsewhere.  All of the panellists would like to see a wider range of Japanese cinema on offer, mentioning LGBT films, mainstream comedies and documentaries as genres that tend to be ignored over here. Takekawa is taking notes all the way through this, presumably with an eye towards JFTFP22. 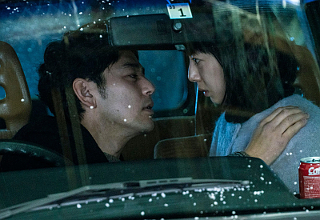 But let's put next year's programme to one side for now and focus on this year's, starting with our first film, Mishima Yukiko's Shape Of Red. It's meaningless, I know, but the original Japanese title is literally the English word Red, and presumably the distributors were worried that we'd think it was that film where Bruce Willis beats people to death with his pension book. Toko (Kaho) is a woman trapped in a loveless marriage to an absolute pig of an architect. (The BBG notes that it's a profession that seems to attract terrible people, at least in the movies.) At a work function, Toko bumps into Kurata (Tsumabuki Satoshi), an old flame of hers from a decade ago. Within seconds they're snogging in a stairwell: within a week or two Kurata has offered Toko a job, and the chance to resume her own career that she put on hold to raise a family.

This could all work out in the end, couldn't it? Well, no, because every JFTFP programme contains at least one cancer weepie, and I feel rather annoyed that we didn't find out that Shape Of Red was this year's until twenty-odd minutes into it. Mind you, there are other reasons to be annoyed by it. Messily structured rather than artfully non-linear, it goes down a couple of blind alleys involving yet another potential love interest for Toko, and adds portentous symbolism relating to the colour of the title that doesn't help matters in the slightest. Most frustrating of all, Toko is set up as a totally passive character who lurches from one man to another depending on who’s in shot at the time. Nevertheless, the film insists on judging her behaviour throughout, having her wedding ring visible in every single shot no matter what angle she’s filmed from. 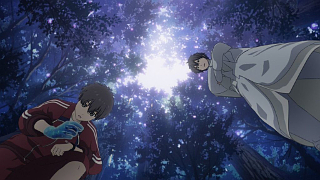 I've been to a few online film festivals now, and have a rough idea of how difficult it is for festival organisers to negotiate the short-term streaming rights for new films - inevitably, this involves limiting the amount of time they're available for streaming, the number of people who can stream them, or (in this festival's case) both. So the rule I always apply to JFTFP ticketing - The Anime Always Sells Out First - applies double this year, even when it's one with as berserk a premise as Ito Tomohiko's Hello World. It starts out as a standard teen romance, albeit with the twist of being set in Kyoto in 2027, with our hero Naomi having problems with indecisiveness and the lack of a girlfriend. But then a bloke suddenly appears claiming to be Naomi from ten years in the future, and saying he can help him on the right track with a relationship he hasn’t started yet. Actually, though, it’s more complicated than that: young Naomi discovers that he's really living inside a computer simulation of Kyoto, and adult Naomi is an avatar from the real world trying to atone for a mistake he made in his past. Actually, though, it’s even more complicated than that...

By the end of its pacy 100 minutes, what started as a high school romance has escalated into a full-on apocalypse resembling the climax of Akira. It's to Hello World's credit that the constant escalation of its stakes never feels forced, until you look back at the end and see how far you've come from where you started. (And don't get me started on the very final scene.) The secret appears to be a careful mix of real-world realism (hey, I've been on those station steps in Kyoto, although the closest I got to feeling threatened was when they turned off eight of the eleven escalators from the rooftop terrace to ground level) and eye-wrenchingly trippy visuals (another blend of hand-drawn cartoonishness with psychedelic CG enhancement). It's as rigorous a piece of mind sodomy as a Christopher Nolan film, except this one actually makes sense, so hopefully it'll get a wider screening in the UK beyond this.

I've got a couple more weekends of JFTFP21 to follow: expect to hear about those soon.