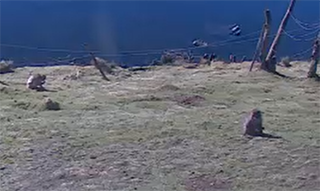 In the meantime, your Simian Substitute Site for March 2021 is RZSS Snow Monkey Cam. Highland Wildlife Park is in the middle of the Cairngorms in Scotland, and if the world wasn’t in such a state right now you could go there and watch their snow monkeys do their thing. But the park’s closed right now, and the snow monkeys are having to make do with video conferencing like the rest of us. They seem to be a little reluctant to get close to the camera, but keep your eyes open during daylight hours and you should be able to get to see them.

Meanwhile, elsewhere in Scotland, Glasgow is in the middle of its annual film festival, which is being held online this year like so many others. Inevitably, that’s what we’re doing at the moment. And yes, we’re also continuing to do the Japan Foundation Touring Film Programme at the same time. So you can expect lots of film reviews this month if you’re lucky, or a prolonged silence broken up with faint whimpers if you’re not. Place your bets in the comment box below.