Home Archives/Categories About Me RSS Feed Mailing List Email
Beerfests In A Box
Simian Substitute Site for May 2021: Hartlepool 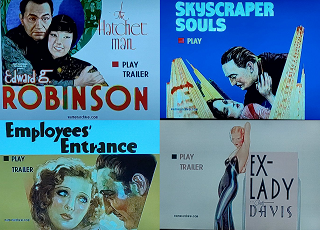 This isn’t our first encounter with the Hays Code. This was the document which came into force in 1934, and delineated precisely what sort of behaviour was unacceptable in Hollywood movies for the next three decades. It was also, by implication, the marker for the end of Hollywood’s Pre-Code era – that glorious four-year stretch between 1930 and 1934 when mild immorality ran wild on the big screen. It’s an era of filmmaking that’s been frequently celebrated by the British Film Institute, most notably in BFI Southbank's excellent 2014 season, Breaking The Code.

Shortly after that season took place, The Belated Birthday Girl bought me a four-pack of Pre-Code DVDs as a birthday present. Forbidden Hollywood Volume 7 was one of a small-run series of collections by the Warner Archive label. It contained one film from the BFI season, and three others that were unfamiliar to me. A lovely present, of course, but like most of the discs in our joint collection it was a question of when we would find the time to watch them.

I don’t really do film reviews on Twitter. So here they are. 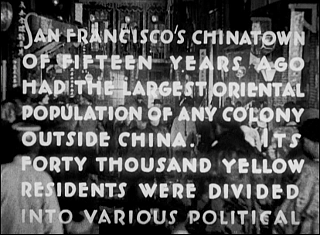 As has become a catchphrase on Talking Pictures TV, we have to accept that films made in the early 1930s will reflect the outdated attitudes of their time. So we chose to lean into this by starting off our binge with The Hatchet Man, featuring Edward G Robinson as a Chinese gangster alongside a couple of dozen other Caucasian actors in yellowface. The awkward thing is, this could be a perfectly fine gangster story if you took the Chinese elements out of it: an enforcer for a criminal mob (Wong, played by Robinson) has to make a tough choice when he’s ordered to execute his best friend as part of a gang war. But because it's set in an alien culture, the filmmakers feel they can push the plot into areas that an American crime flick would normally avoid. The obvious one is that all the violence involves hatchets instead of guns: but there's also the wrinkle of Robinson's friend accepting that loyalty to an employer wins out over mere friendship. He's so accepting, he even leaves Wong his daughter’s hand in marriage in his will, happily pointing out that she’ll be legal in ten years or so.

Here’s the thing that surprised me: rather than the daughter Toya (Loretta Young) being railroaded into marriage when the time comes, a big deal is made out of Wong making sure that she's as happy with the arrangement as he is. Mind you, this is all down to him having become fully Westernised, evolving from the level of his savage ancestors to embrace unfamiliar concepts such as tailoring and consent. In effect, the feminism of the movie turns out to be an accidental side product of its racism. Still, if you can get used to its total uncertainty about whether it’s fascinated or appalled by Asian culture, it’s an entertaining piece of work that moves like a rocket. It also has a surprising number of axe murders for a thirties film, including one whose staging is genuinely shocking even today.

Moving away from race as a potential Pre-Code flashpoint, we encounter most of the other ones in Skyscraper Souls: the first of two films in this collection featuring Warren William, Pre-Code cinema’s favourite bastard. Like, perhaps, Michael Douglas half a century later, he spends so much of his career playing gits that ultimately you have to consider the possibility that he himself might be one. Here, he’s the owner of a hundred-storey skyscraper, home to a bank and countless other businesses, each with their own story to tell. But these are iffy financial times, and he’ll have to rely on his wits to maintain ownership of the place, while simultaneously trying to decide which of its many female inhabitants he wants to bed.

It’s a curiously overstuffed film, running for a gargantuan (by the standards of these things) 97 minutes: unlike the other three films in this collection, the original source material is a novel rather than a play, and it feels like the adapters tried to keep all their favourite bits in there. Those bits vary wildly in tone – goofy slapstick and high tragedy occur in virtually consecutive scenes – and fail to come together as a satisfying whole. What does hold it together is William, who’s ferociously watchable as he unleashes his various plots, crushing or shagging anyone who gets in his way. And the skyscraper itself is a major factor too, I guess – the sheer art deco craziness of all the sets makes it lovely to look at.

In the same box set is another Warren William film – Employees' Entrance, which we saw in the BFI’s 2014 season. I could remember nothing of the plot seven years later, apart from William being a bastard (again): watching it back to back with Skyscraper Souls is an odd experience, as they have so many similarities in the way they’re plotted. This time round, William is the manager of a huge department store, but once again he bulldozes his way through countless lives in order to get the success he craves. In both films, there’s a naïve young thing who’s taken by an irritating boyfriend for a date at the Follies, only to be seduced by William while she complains about how champagne bubbles get up her nose. Employees' Entrance beats Skyscraper in terms of Pre-Code transgression, though, especially in the scene where Warren is looking at Loretta Young passed out drunk on his bed, and romantic music starts playing.

There may be some thematic overlap between the two William films – don’t get me started on how guns figure in the climax of both – but for my money Employees' Entrance is the more enjoyable of the two. Whereas Skyscraper Souls is attempting to cram all manner of conflicting emotions into its running time, and fails, Employees' Entrance is happy to be a comedy with the occasional dramatic scene, and succeeds. You could, from one angle, even see William’s business approach as honourable – his bosses are trying to get him to make cutbacks, but he’s determined to keep the store’s profits growing and his staff employed, even if he has to drive some of them into the ground to do it.

It’s at this point that The Belated Birthday Girl makes a fascinating observation about the three films we’ve seen so far, and their attitude to marriage. Even as they cock a snook at conventional morality and mores, marriage is the one thing they take seriously – weddings are the only form of happy ending we get, and any marital breakdown is depicted as due to the personal failings of the people involved. Which leads us nicely into Ex-Lady, an early vehicle for Bette Davis. She’s playing Helen, a distinctly modern woman who’s got a job as a commercial artist, a fancy apartment, and a man who calls round at nights. She doesn’t see the need to get married, as she’s got everything she needs: but her man Don (Gene Raymond) disagrees, as do her parents. Eventually, she’s badgered into getting hitched: but does it work out? The answer to that question is more or less the meat of the film, so you’ll have to watch it for yourself to see if The BBG's theory holds for this one too.

It’s the shortest film of the ones we’ve watched – all over and done with in a mere 67 minutes – but Ex-Lady does drag in parts, surprisingly. It’s especially true in a mid-film dinner party sequence, where the boredom is kind of the point (“boilers, boilers, boilers,” as Helen sums up the conversation afterwards), but in a film this short we shouldn’t need to experience it in real time. The film can't quite make up its mind if marriage is a good thing or a bad thing, and you feel that all involved tried to put off reaching a conclusion for as long as they could – the final line of dialogue, in particular, feels distinctly dubbed-on as an afterthought. Still, the rudeness reaches pleasantly unexpected levels (with Helen and Don appearing at one point to have sex directly in front of an entire dance orchestra), and it's as well-performed as you'd expect from a cast like this.

As FilmFan has pointed out in his gargantuan list of Every Pre-Code Film He’s Discovered The Existence Of, a lot of these movies are available on YouTube in not entirely legal form. Not entirely permanent, either, for that matter. So I'm glad that we've got a few of them in the house on physical media, while being alarmed at the recent announcement that Warner Archive have decided that they don't want to make or sell physical media any more. Maybe you should buy some of their DVDs yourself while there's still time.