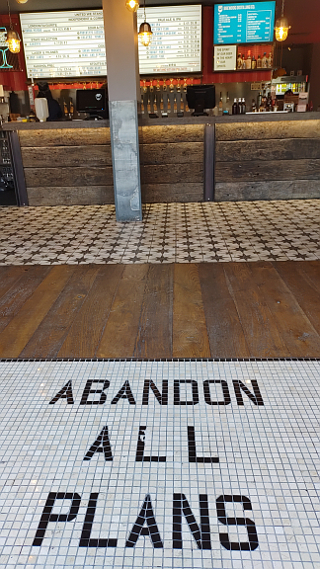 Here’s an example of an abandoned plan for you. My original idea was to work within the limitations of the time – so on BrewDog Ealing’s first weekend of operation, The Belated Birthday Girl and I would do the research for a review of a bar whose interior I'd only visit briefly while having a piss. It seemed like a fine theory, bit on practice we realised it didn’t do the place justice: so we went back again six weeks later, by which time lockdown restrictions had relaxed enough to allow us to sit inside the building. (Plus, we’d had our second vaccination the day before, and felt in the mood to test it out.) So what you’ve got here isn’t just a review of a bar in two different sets of circumstances – it’s also a snapshot of what drinking in England was like in two different historical periods. Is that too far up itself? Well, tough, that’s what you’re getting.

Our first visit was on April 17th, just under a week into phase 2 of the lockdown easing, meaning that we’d had to book an outside table. BrewDog’s choice of location turned out to work pretty well for this: the Dickens Yard complex is a large courtyard with various other bars and eateries dotted around it, meaning that each one has a decent amount of outdoor space for tables. On a sunny Saturday afternoon like this one, those carefully spaced out tables were occupied by lots of people studiously avoiding Prince Philip's funeral: there was also a brisk trade in people walking up to the door and being turned away because it was full, so you can’t really complain about the location. Though you could legitimately complain about the weather: admittedly sunny, but with a nasty chilly breeze that meant most of us were banging the buttons on the overhead heaters every ten minutes or so. It almost feels like the bar’s been positioned to avoid direct sunshine as much as possible, or maybe it’s the compromise they made to get themselves a decent spot in West London without bankrupting the company on the middle of a pandemic.

Our second visit was on May 29th, by which time the lockdown easing was on phase 3: the bar could now offer you a table inside, albeit with spacing that made it still crucial to book in advance, and your stay limited to a two-hour timeslot. On that first visit six weeks earlier, as predicted, I’d popped inside there briefly to use the loo, so there weren’t any surprises in store. To be honest, there wouldn’t have been any surprises even if I’d held in my wee till I got home. It’s the usual collection of benches, tables, cushioned steps and booths in the established house style. This bar’s neon sign plays homage to the area’s legendary film studio: the bogs are kitted out with house advertising rather than the quirky alternatives each bar used to have. The one unusual feature is a seating area arranged in a square surrounding a large heap of coal, which could be an eye level open fire, or an indoor barbie, or where they sacrifice the management of Hawkes in a huge wicker man if cider sales go down in two consecutive quarters. I guess we’ll find out eventually.

Whether it’s a Saturday afternoon visit like our first one, or a Saturday night visit like our second, it’s a commonly heard complaint that in this current restrictive climate, the spontaneity’s gone out of going to the pub: you can’t just roll up there on a whim, you’ve got to plan a timeslot and stick to it. I think I’ve learned that I don’t have a problem with that. In the space of two trips to the Ealing bar, we’d come up with the perfect structure for a two-hour sesh, consisting of three rounds of drinks: one sessionable, one interesting, and one guaranteed to get me funny looks when I tell people at work about it. Plus a substantial meal to accompany the first drink, because old post-lockdown habits die hard.

As a system, it worked really well. That first visit’s session drink was notable for being the first pint someone else had poured for me in the last five and a half months, and I got to celebrate that in the worst way possible. As the ABVs rose, we tended to hit the guest beers more than usual, with delightful double-digit monsters from the likes of Fierce and Mikkeller. Our lunchtime visit was notable for being the second time in my life I've tried to eat one of BrewDog's brunch burgers - 7oz beef patty, hash brown, fried egg, black pudding, smoked streaky bacon, forest mushroom, hollandaise, cheddar & ketchup in a sesame and poppy seeded brioche bun. There will not be a third time: beef patties just aren't a breakfast food, and that's the end of it. The evening meal was a lot more successful thanks to This Isn’t A Bacon Double Cheeseburger, a ballsy attempt to build a vegan burger with fake beef, fake bacon and fake cheese, and miraculously pulling it off.

As we slowly limp towards normalcy, a bar working in these circumstances lives or dies by the quality of its table service. For virtually the whole of the four hours we’ve spent there so far, BrewDog Ealing passes that test both inside and outside, apart from a slight wobble around the 8pm Saturday peak which they quickly got over. All that remains is to see how the place works when people are in it partying like it’s 2019. Hopefully, that’ll be soon.