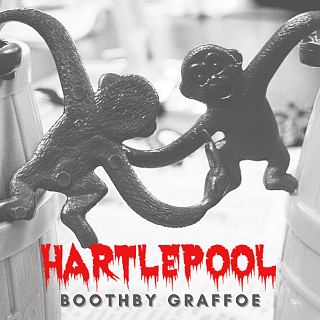 In the meantime, your Simian Substitute Site for May 2021 is Hartlepool, a just-released digital single by Boothby Graffoe. It's a song he's been performing for at least a decade, but the Bandcamp page explains why he's chosen to release it now: "Earlier this year, after the sudden resignation of the local MP, it was announced there would be a by-election in Hartlepool. With just a short time until the vote, Boothby Graffoe realised, if he were to release a single called Hartlepool he’d be able to use the media’s constant use of the name, Hartlepool, to promote it. Yes. He really is that cheap."

Experts in Simian lore will already know why a song about Hartlepool is worthy of mention here: the rest of you, prepare to be educated. Boothby's a nice chap - he's indirectly responsible for that one time we went to Melbourne (inspired by an email from the woman who ran his Australian fan site), and he follows me on Twitter (well, me and, um, twenty-six thousand other people) - so forking out £1.50 for a download of the song seems like a perfectly reasonable thing for you to do.

Coming up this month: a post I sort of hinted was coming last month, but got bumped in favour of a batch of Pre-Code film reviews. Plus some other stuff I haven't quite decided on yet. Things are changing all the time with regard to what we can do outside our homes, and I'll be reporting on that as and when I can. In the meantime, you've got the comments box down there to play with if you'd rather stay indoors for now.