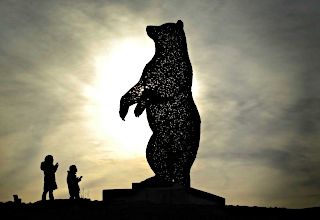 It's quiet. Too quiet? Well, we'll see. But there's no denying that our train journey from London to Edinburgh is very different from any previous August when we've done this. For a large part of the journey, it's about two-thirds full, rather than the standing-room-only we'd normally get. There are two guys sitting alongside us looking through festival events and trying to book them - yeah, good luck trying to get Thundercat tickets for tonight - but they're the only visible evidence that there's a festival happening this week. And confusingly, they get off at Newcastle, to be replaced by a bunch of Geordie lasses heading up to Scotland for a Saturday night out in a country with more restrictive Covid regulations than the one they're leaving. In fact, quite a few people leave the train at Newcastle, and we end up crossing the border in a train that's no more than a third full.

Other than that, it's a pretty uneventful journey. The Belated Birthday Girl looks to her right at the precise moment almost three hours in, and thus wins our regular Who Gets To See The Angel Of The North First competition. But we get to spot a new landmark on the route - looking out on our left, we suddenly see a statue of a bear just outside Dunbar. With a combination of GPS location and a Google search, we find out that it's a tribute to local conservationist John Muir, standing five metres high, created by Andy Scott. It's an impressive piece of work even when you're speeding past it at a distance, but it's alarming to read the 2019 news article about it and learn that they were going to give local schoolkids the chance to name the statue. It's probably called Beary McBearface by now.

One of the first things we see in Waverley Station is what passes for a regular sight back home, but here it's accompanied by a sign reading 'alcohol-based sanitiser, not for consumption'. Welcome to Scotland! No, that's not fair. The traditional Scottish welcome involves walking out of the station into pissing rain, and we certainly get that in spades. It makes for a slightly downbeat start to our stay, as we find out that a) our hotel won't let us check in till 4pm (see if you can work out which chain we're staying with from that), b) one of the restaurants we've booked a meal for later in the week has closed while all the staff are tested for Covid, and c) the first bar where we try to shelter from the rain won't let us in because they're full. Eventually, we find someone who'll let us in to get dry, and somewhat predictably it's BrewDog Lothian Road, meaning we get to officially mark our arrival with a wee swally. 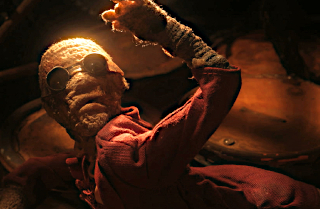 Things perk up after that, you'll be pleased to hear. We head over to the Filmhouse to celebrate the triumphant return of the Edinburgh International Film Festival to us, and not the other way round like they'd like you to think. Lunch in the Filmhouse cafe bar gives us the welcome opportunity to surprise the living hell out of FilmFan, who's sat at a table there bashing out reviews on his laptop, just like the old days. (He was abstracting electricity from the cafe's power sockets years before it was fashionable, or indeed permitted.)

Like us, FilmFan's here for Mad God, the debut feature from veteran animator Phil Tippett - best known for his stop-motion work on classics like Star Wars and Robocop. In the excellent pre-recorded Q&A shown at the end of the screening, Tippett recalls some filmmaking advice given to him by Milos Forman: "if you want to have a good shit, you need to have a good meal first". This is offered as sort of justification for his first feature taking 33 years to make. Although Tippett subsequently reveals that a large part of the work was done by unpaid volunteers who wanted the chance to collaborate with one of their heroes, which sounds more like getting someone else to chew and digest your food for you. And if you think that’s a disturbing image, you should see the film.

The first third of Mad God is staggering. It features a character experiencing a literal descent into some sort of hell, one that’s depicted as an almost continuous barrage of dismemberment and shitting. The huge amount of visual detail – presumably partly the work of Tippett’s willing slaves – is relentless, and reminds me of nothing so much as the sort of animated shorts we used to watch regularly at this festival (and may do so again, we'll see). They'd be the work of a young animator who had everything to prove and ten minutes to prove it in, who'd cram in all the ideas they'd ever had into a single short. Now imagine someone with Tippett's experience and craft doing something like that for the length of an entire feature. Mad God operates at that sort of level for a full half hour, with each nightmarish image quickly followed up by an even more nightmarish one.

If he'd stopped after that first half hour, it would have been a perfect short. However, he doesn’t. There’s a slow interlude (albeit one that achieves its slowness through repetitive gore), and it takes a while for the film to build up a head of steam again. It never really returns to that early peak of intensity (which is a shame, because the climax really needs it), and becomes less interesting as its grasp on narrative becomes more fragile. But it’s certainly unlike anything you’ve ever seen before – well, maybe Jan Svankmajer at a pinch, but Svankmajer with the brake cables cut. 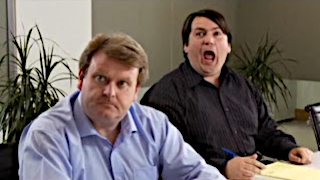 Dinner at Chez Jules - which is basically just like lunch at Chez Jules, just more expensive, but still cheaper than anywhere else in town - and then off to another one of our old favourite haunts. We all had our own little habits that helped us get through lockdown, and for myself and The BBG it was Saturday Night Live At The Stand. Every Saturday at 8.30pm, Mark Nelson would pop up on the internet to introduce ninety minutes or so of stand-up comedy. It started off as a series of pre-recorded clips joined together with live links from a flat somewhere in Glasgow: but as the restrictions on meeting indoors were relaxed just a little, the show became a live broadcast from the Stand comedy club in Edinburgh. What with lockdown being what it was, the only people who could perform there were comics who were already in Scotland and could get to the Stand without breaking travel restrictions, where they performed to an audience of the other comics on the bill plus a camera. As a result, over the course of a year we got to learn quite a bit about the Scottish comedy scene. "When all this is over," we said, "we'll have to go back there and see some of these people."

Well, it's not over, but we're doing it anyway. Mark Nelson has gone on to bigger things - a sold-out solo show in a large venue, plus hosting the BBC's Fringe coverage on the telly in his spare time - but the Stand is open for business again, and actually letting punters inside. So it only seems fair that our return to the Stand is at 8.30pm on a Saturday for their Best Of Scottish Comedy show. It's a different bill of four comics every night, all drawn from that talent pool that used to be on the livestreams a year ago. I've managed to keep the lineup for tonight secret from The BBG, and she's utterly delighted as she realises that all four acts are ones that we know from the streams.

It's a nicely balanced collection of comics too, particularly in terms of age and experience. Stephen Buchanan tells tales about how he's just moved in with his girlfriend, while JoJo Sutherland and Raymond Mearns are equally grumpy about living with their teenage children. Amusingly, both Sutherland and Mearns have similar stories about their daughters using them as a 24 hour taxi service taking them wherever they want to go, though both stories end very differently. (Spoiler: Sutherland wins hers.) Meanwhile, compere Ray Bradshaw is keeping very quiet about his own relationship status, but quizzing the whole of the front row about theirs.

I didn't realise just how much I'd missed this: being in an enclosed space with strangers, laughing at stuff. (Although the 'strangers' part of that is still a little iffy, as the number of people here complying with the Scottish rules on mask-wearing is in roughly single figures.) It's a fine night of comedy, with headliner Raymond Mearns coming out on top: before the livestreams I only knew him as part of the supporting cast of the first series of Limmy's Show, but he's one of those naturally funny people you can't really hide in a background role. (Which may be why he was only in the first series.) I particularly treasure his bit about how playing in the bins as a child gave him natural immunity to diseases in later life, apart from "the usual Glasgow stuff like diabetes and heart attacks."