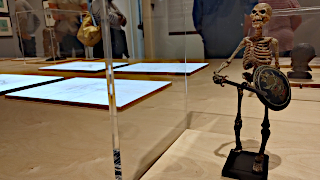 Is this cheating? In normal years, it wouldn't be. For as long as I can remember, all of Edinburgh's year-round art galleries have taken whichever exhibitions happened to be running there during the month of August, and advertised them in the Fringe programme as if they were festival events. This year's online-only Fringe programme doesn't do that. But when there's an exhibition in town like Ray Harryhausen: Titan Of Cinema, you bend the rules whatever way you can to justify seeing it. Dammit, I've been saying for 32 years now that my first ever Edinburgh Festival event was a Simple Minds gig, and this exhibition is much less of a stretch (not to mention much more fun).

Until February 2022, the Scottish National Gallery Of Modern Art has six rooms full of stuff from the archives of Ray Harryhausen, the legendary stop-motion animator responsible for the best bits of films from Jason And The Argonauts to Clash Of The Titans. There's a nice tie-in with yesterday's Phil Tippett film Mad God, because Tippett mentioned in his Q&A that a similar exhibition of his own materials wouldn't be possible - he keeps dismantling what he makes for one film and re-uses it on the next. Also, the early part of this particular exhibition shows a very clear throughline in the history of stop-motion animation. Wallis O'Brien animated King Kong: Harryhausen saw that film and was inspired to become an animator: Tippett saw Harryhausen's films and was inspired in the same way: and, no doubt, those unpaid interns of Tippett's that I was so snotty about yesterday could go on to become the next generation.

After an introduction that sets up Harryhausen's life-changing experience seeing King Kong, we move swiftly on to his own teenage experiments in animation, with a couple of fuzzy film clips on display. Even though some of the compositing is a bit rough, it's already clear where his talents lie - using models and carefully observed movement to give each of his creatures a personality. The early rooms in the exhibition feel more like a collection of fetish objects – his model box, his Oscar and so on – but before too long we get to the stuff we really want to see: the actual models used in his films, along with loads of his pre-production artwork.

For me, the artwork is the biggest surprise in this collection, because it's gorgeous. We don't just get quick sketches done for storyboards, we get intricately detailed drawings depicting how Harryhausen wanted individual scenes to look. He was an incredible accomplished illustrator, and this exhibit has dozens of drawings that could be works of art in their own right, even displaying them alongside work by Gustave Dore to show you a key influence. Plus, of course, you get all the model skeletons and Krakens you could hope for. They say you should allow 75 minutes to see everything here, but we end up spending well over an hour and a half, and still have to rush through the green screen fun in the last room so we can get to our next event on time. 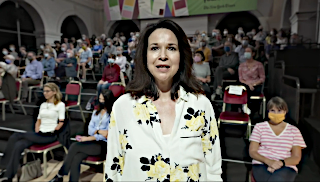 That next event is our first - and this year, only - visit to the Book Festival, which has relocated from Charlotte Square to the Edinburgh College of Art. I have to say, I like what they’ve done with the place. The outdoor meeting space may be smaller, but the bookshop's bigger, and the event theatres are a huge improvement on the old days. For a start, they're in a building rather than a tent, so there's no more risk of author talks being rendered inaudible by rain or Tattoo fireworks. The theatres are also well-equipped to cope with pandemic life - seating nicely spaced out in bubbles, full webcasting capabilities, and a flexible video backdrop to the stage that includes a neat solution to the dilemma of how to provide sign language interpretation for the events.

We’re here to see Jeanette Winterson, mainly because she's the biggest name appearing at the Book Festival during our few days in the city. Also, shamefully, I'm partly there because of the possibility of her suddenly going nuts and setting fire to stuff, but you'll be pleased to hear that doesn't happen. In fact, there's no discussion of her earlier work at all: she's here solely to discuss her latest book 12 Bytes, a collection of nonfiction essays looking at technology and artificial intelligence. It's always slightly worrying when a generalist writer takes on tech subjects, but Winterson's very obviously done her research, and has a wide brief to cover. How the prospect of being able to dump the contents of our brain to external storage may be closer than we think, and the pros and cons of that. The idea of our digital selves being separate from our physical bodies, and how that idea's already familiar to us thanks to religion. The way that men have taken technology out of the hands of women, and how the dropoff in female computing graduates can be pinpointed precisely to 1984 and the rise of Apple.

This could all get dark and gloomy very quickly indeed, but Winterson is too entertaining a writer to make this a po-faced discussion, so these massive ideas are thrown out with a twinkle in the eye and a joke to help them get across. There are certainly plenty of laughs in the otherwise alarming section on sex robots, as she muses on the philosophical questions behind the apparent existence of sex robot brothels. Her talk's available online until this Wednesday afternoon on a pay-what-you-want basis, and if you're anything like us once you've heard it you'll be keen to read the book. As we're on more of an audiobook kick at the moment, we download the audio version while we're at lunch: I'm tempted to run back to the Book Festival signing tent and ask Winterson to yell her name into my phone microphone in lieu of an autograph.

Back to the Filmhouse for more animation, this time an anime from Japan. Unlike yesterday's Mad God, The Deer King has been a mere five years in the making. Given the particular five years during which it was made, the publicity is a little too keen to push the topicality of its otherwise fantastical storyline: a terrible disease is spreading across the world (a world, anyway), and doctors are desperately trying to find a cure. There are three main differences between this and our current lives, though. First, it’s a disease that’s largely wolfborne. Second, it may have been weaponised as part of a war between two neighbouring countries. And third, one man appears to have been bitten and survived, and the race is on to get hold of his blood to manufacture a cure.

Star Wars aside, the heart tends to sink when a film makes you sit through several screens of opening text that set up the world you’re about to enter, and that’s definitely the case here. But it's just part of the main problem with The Deer King: it's the sort of fantasy story that’s almost entirely made of exposition, to the extent that you feel that the rules of the world are being written as they go along. Anything in the film that’s not verbal world building is just generic bubbly apocalypse animation, which was impressive when we first saw it in Akira but is just a bit dull now. It doesn’t help that this is another film with subtitles for the hard of hearing, which is a great thing for accessibility but has the curious side effect of underlining how manipulative the score is. [SAD MUSIC, SLOWLY FADING OUT]

Having said that, here’s one good thing about the disease we’re currently battling against in the real world: it’s normalised the idea of film festival Q&A sessions being pre-recorded over a video conferencing link, rather than their existence being down to whether a filmmaker can blag a flight or not. Director Masashi Ando has some interesting answers to questions that had occurred to me (like the use of Seurasaari in Finland as a visual reference for the forest environment), as well as questions that hadn’t (like the perils of designing two new races, and resisting the temptation to make one of them black). But the funniest moment comes during Ando's first answer, when it becomes clear the subtitles are still for the hard of hearing – his first answer is subtitled 'he speaks Japanese', which causes chaos in the room until it becomes apparent that there’s an interpreter on the Zoom call too. 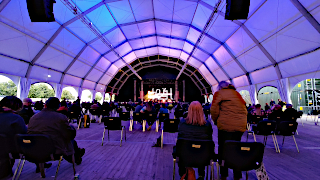 Dinner involves a veritable menagerie of Edinburgh wildlife - a Hanging Bat, a Red Squirrel - and then we're off on a tram to make this the platonic ideal of a festival day: one in which we've been to an event from all four festivals. Our first visit this week to the International Festival lets us get our first look at their custom built venue at Edinburgh Park. Again, I like what they've done with the place. As promised, it’s kinda sorta open air: a gigantic canopy with open sides, so it’s incredibly ventilated, which is both a good and bad thing given this city's climate. It’s a cavernous space, with seats widely spaced in small bubbles, and a wooden floor in case anyone fancies doing some clog dancing while sat on their seat.

Which makes it fortunate that The Unthanks are playing tonight. I last saw them live around the time of the Mount The Air album, which filled out their sound excellently (although I know some who disagree). Since then, they’ve released a few more of their Diversions albums, a series of collaborations and experiments that have taken them in all sorts of unexpected directions. Tonight’s set is largely drawn from those, with the songs coming in themed clumps: a few from their Songs From The Shipyards soundtrack, a couple from their collection of Molly Drake songs, and so on.

As ever, it’s the charm of Rachel and Becky Unthank that keeps things consistent through all these deviations from their original folk roots. That's particularly useful when towards the end of The Testimony Of Patience Kershaw, Rachel has some sort of brainfart and completely forgets how the final verse goes: the response from the audience is warm and forgiving. I'm slightly grumpy that she's messed up one of my favourites, but a gorgeous stripped-back version of The King Of Rome (another favourite) more than makes up for it. And we even get some of that clog dancing towards the end. Let’s see if our other show at Edinburgh Park has some of that...