Reviewed today: Faceless, Songs From Scotland, A Young Man Dressed As A Gorilla Dressed As An Old Man Sits Rocking In A Rocking Chair For 56 Minutes And Then Leaves 13. 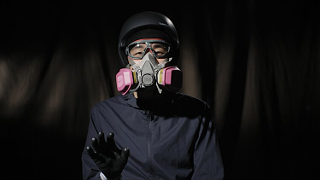 Post-Edinburgh slump is definitely a thing – I’ve experienced it enough times since 1989 to know your body coasts on pure adrenalin while you’re north of the border, and then gives up on you completely when you head back south. Sure, a train journey like last night’s may have something to do with it. But I definitely got more sleep last night than I did on any of the four previous nights this week, and I still feel like a wreck. My brain knows that I've got a few days of online Edinburgh still to do, and that it requires as much concentration as the real world stuff, but my body is refusing to believe any of that shit.

With that in mind, our online day starts later than planned at the Film Festival, even though technically that finished yesterday, meaning we've only got a limited window to catch up with the last few films before they're cleared off Filmhouse At Home forever. Faceless is Jennifer Ngo’s documentary about the current state of Hong Kong, a subject that's been close to my heart ever since my first visit nearly 30 years ago. She follows four people known here only as The Student, The Artist, The Believer and The Daughter (whose father is a policeman). All four wear facemasks as they give their ground level testimony of the protests that happened in 2019, and the backlash that followed them in 2020.

If nothing else, Faceless clears up a small mystery that's been bugging me since my last visit in 2017: why does Hong Kong brewery Young Master have a rather delicious beer called Add Oil? It turns out that it's a bit of HK slang, used quite a lot as an expression of encouragement during the protests - it loosely translates as 'keep going'.  It kind of sums up the emotional tone at the end of the film, where the interviewees have hope for the future despite everything, but you can tell they're barely hanging on by a thread. Certainly from the outside, there seems to be very little to be hopeful about. Ngo's footage of the police in action is shocking, but the filming done in the middle of the protests by The Student with his Go-Pro camera is even more so.

It's a film that gets across the sheer scale of the problem facing Hong Kong by zooming in and giving it a human face (or at least the unmasked portions of four faces). Although at the other end of the scale, the early overhead shots of the huge marches through the streets make it clear these aren't just a few isolated dissidents. (I'd imagine no other totalitarian regime is going to allow drone filming of protests after this one.) 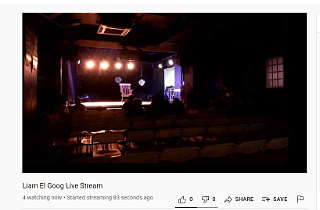 Or is it? Over the 56 minutes, there are multiple interventions from audience members, and they come at suspiciously regular intervals. It's hard to tell how much of what happens around the gorilla is set up in advance, and how much of it is off-duty narcissists in the audience looking to show off. Some of them take advantage of the gorilla's immobility by running on stage to play rounds of rock paper scissors with him, or take selfies. After a while some audience members walk out, but that’s just part of the fun. As Andrew O’Neill memorably said once, walkouts are just weakness leaving the venue, and the booing that strikes up as people decide they've had enough is rather amusing – this is a communal experience, and people have chosen not to be part of the community, so booooo.

But then, as The BBG points out, boundaries start to get crossed. More and more of the audience get up and quietly sit at the gorilla's feet, recreating the classic Fringe scenario of there being more people on the stage than off it. Later, people start piling objects on top of him (including a full size electric guitar) like this is some sort of simian version of Buckaroo. A woman performs a lap dance in front of – well, as someone points out in the live chat, was the dance intended for the young man, the old man or the gorilla? Again, the gorilla can't react to any of these indignities, which may be part of his self-imposed rules: but it does raise a lot of very awkward questions for what's basically just a bit of Free Fringe silliness. Maybe it is art after all. The Book Festival has a few different policies when it comes to their online content. Some of the recorded shows are being kept online till the end of the year: others are being taken down just 72 hours after their original live streaming. Songs From Scotland is one of the latter: it's an event that took place on Monday night while we were watching Black Country, New Road, and it will be removed from the internet at 11.30pm tonight. We start watching it at 10pm, which is like the online equivalent of leaving yourself five minutes to get from the Pleasance to the Stand. We manage it, though.

Scottish poet Edwin Morgan had his centenary last year, and the Book Festival probably would have celebrated it then, if it wasn't for all the other stuff going on. Instead, they've decided to wait until they could do him justice in a room with an audience. This event has four parts, starting with some poems from Alycia Pirmohamed (who won the Edwin Morgan Trust Poetry Award last year), before getting into the meat of the evening: the premiere of a setting of five Morgan sonnets to music. This job's been done by Gavin Bryars, who I thought I only knew from Jesus' Blood Never Failed Me Yet, although I'm reminded during the Q&A that I saw an opera of his called Dr Ox's Experiment - directed by Atom Egoyan, cinema fans - which I can remember precisely nothing about.

Because of Jesus' Blood I've only ever associated Bryars with experimental minimalism, which turns out to be the exact opposite of what we get here. Arranged for the eight voices of Glasgow choir Cappella Nova, the music here swoops and glides across a huge tonal range, with complex harmonies clashing and resolving themselves repeatedly. In that post-concert Q&A, Bryars reveals himself to be a thoughtful setter of other people's words to music, refusing to change words to make them fit better. (He makes the interesting comparison with film music, where he dislikes the way a composer's work can be hacked around by a director to fit their requirements.)

There's only one minor problem with Bryars' setting here: given the complexity of the arrangements and the size of the choir, Morgan's words can't help but get lost now and again. So it's nice that the programme ends by stripping everything back to a single voice, as Karine Polwart (accompanied by Dave Milligan) performs a lovely version of The Good Years to send us all home happy. Or upstairs to bed happy, if we're already home.